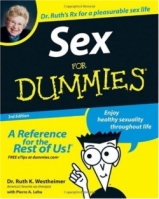 So on this Valentine’s Day 2011, when we honor the poor, beheaded St. Valentine by giving each other fat-filled sweets and taking a break from our usual humdrum lives, skip the movie just this once.  Chances are if you do, you’ll avoid the inevitable choice of romantic comedy that will make you regret clicking “play” mere minutes after the plot unfolds.

In the long run, it’s better to just take Dr. Ruth’s advise and stay at home.