Come on, people.  The English language is not that difficult – punctuation included. 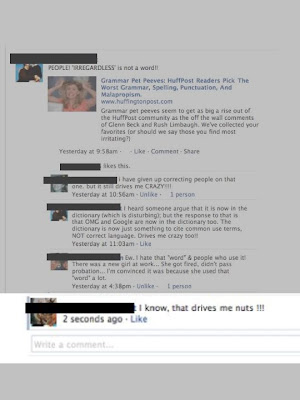 A few days ago I posted the Huffington Post’s Grammar Pet Peeves poll on my Facebook page, only to receive a comment containing (ironically) its own English language error in the placement of the punctuation mark.  Word to the wise:  if you’re going to act smart, buy yourself a copy of The Little Brown Handbook.
This raises a much greater issue, though, on the topic of grammar.  And the topic isn’t anything new; in fact, grammar and punctuation pet peeves have been trending on blogs, websites, and news media outlets regularly.  The Huffington Post’s poll I posted was done toward the end of 2010, in which its readers weighed in on what they saw as the biggest grammar pet peeves.  Among the top peeves were the misappropriation of your/you’re; there/their/they’re; and, its/it’s.  HuffPost also cites one of my own personal favorites as well:  irregardless (a word that does not, in fact, exist).
And yet, the errors still go on …
Even academic publishers have put out their own lists, my favorite (of course) being the Pennington Publisher’s Top 40, with numbers one and two being among some of the common grammatical errors:  dangling modifiers and modals.  These are of the worst problems we (as a society) have grammatically, for it is in using language like I should of, that we change our the way our culture understandings what is right and wrong.
In other words, so many people do it (and do it incorrectly) that it soon becomes “commonplace” – a death sentence to grammatical correctness.
Last week I advocated for common sense use of cellular devices – a campaign that is growing in the underground community where education and technology collide.  It seems that this is the time when grammar and punctuation should be at the forefront of this discussion; for it is in the common linguistic use of certain terms like irregardless and Oh-Em-Gee that they gain legitimacy in the community at large.  On a national level, English teachers are now reporting at unprecedented rates that texting language, grammatical errors, and many other problems (including punctuation) are gaining momentum in their appearance on academic essays.  And as if grammar problems, punctuation errors, and non-existent words were not bad enough, these teachers even report the appearance of an occasional emoticon.
Nothing says intelligence like an essay on Sylvia Plath and the use of alliteration with a 🙂.
The point?
We are at a critical junction in our time.  The appearance of LOL and OMG in professional and academic writing may be prevalent, but it also may be early enough of an error to rectify.  Grammar problems and commonplace errors in linguistics may be remediable.  And punctuation problems (such as the exclamation point faux pas that occurred on my Facebook post) can be as simple as a reminder or two by concerned advocates for literacy in the commonplace.  But it will take much more than just acknowledging the problem and blogging about it to actually make a difference.  Only through action and immediacy will grammar be saved.