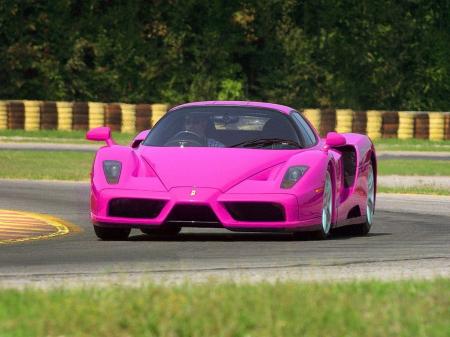 This morning I was driving to meet a friend for lunch and I saw a pink Lamborghini, hot-rodding down the 101 South (towards Los Angeles).  I first spotted it around Oxnard – an unfitting place for such an extravagant car.  The site of the thing, alone, nearly ran me off the road.  I am not kidding you, faithful blog followers:  this thing was hot pink.

Who drives one of these ostentatious pieces of ego, I asked myself as I held back the vomit that threatened to ruin the upholstery of the interior of my meager blue Yaris?  Who?  WHO?

First, the most obvious possibility was Mary Kay Ash, the founder of Mary Kay Cosmetics.  For years – decades! – women have been driving around in the little, pink cars, going door-to-door, to do makeovers and sell cosmetics.  It would have not surprised me to look into that ugly pink eyesore and see her, driving down the 101.

It wasn’t Mary Kay, herself; in fact, it was not even someone I would envision selling Mary Kay Cosmetics.  Sadly, after some savvy Wikipedia searching upon returning home this afternoon, I learned that Ms. Ash passed on to the Cosmetic Afterlife almost 10 years ago.

The next possibility was a sixteen year old girl from Santa Barbara.  As I continued to try and maneuver my car into a

position on the freeway (I was now near Camarillo) that would allow me to see who would actually own such a car, this possibility popped into my mind.  I envisioned this obnoxious, sixteen year old talking on her cell phone, music blaring, hair and clothing visible just enough to show she is the ultimate of hipsters – a yupster.  A sixteen year old yupster in a hot pink Lamborghini.  I just knew it would be her.

Or worse, she’d be wearing a tiara and lots of pink.  And she’d be drunk.  A drunk sixteen year old.  Ugh – the possibilities of my obnoxious, spoiled little girl in the pink Lamborghini were endless.

Lastly, there was just one more option in my mind, and that was a raging douche bag.  You know that guy – the metrosexual, I’m so cool my urine is made of rainbows, guy.  The guy who bumps urban, German techno music from his car and won’t leave the house without polishing his shoes.  It’s the guy who shaves his chest and smells like patchouli – yeah, you know who he is.  You may have even had a crush on him once or twice.

Of all my three guesses, as I started up the Conejo Grade, nearing the end of my journey, I thought that this must be the true identity of the driver of that obnoxious pink Lamborghini.

And just as I was about to get into the exit lane, at the top of the Grade on my way to my lunch, the pink Lamborghini cut off the person in the lane to my left and I was able to catch a glimpse of the holy grail – the true owner of such an horribly wasteful and tasteless piece of machinery.  As I mentioned, it wasn’t Mary Kay or anyone that would fit the mold of your local Mary Kay lady.  It also was not the princess from Santa Barbara.  I listened for the urban, German techno, and I looked as closely as I could (without crashing) to see if cool guy was driving the car.  To my disappointment, it was not even him.

Nope, it was this guy.  (Well, not actually this guy, but this is exactly how he looked.)  In all his glory, driving his hot pink Lamborghini.  He took a sip of Mountain Dew and picked at the insides of his nose as he drove past me.  I realized then that I had learned a very important lesson on this particular trip to lunch with a friend:  “never judge a book by its cover” is especially applicable when it comes to just who drives a pink Lamborghini.