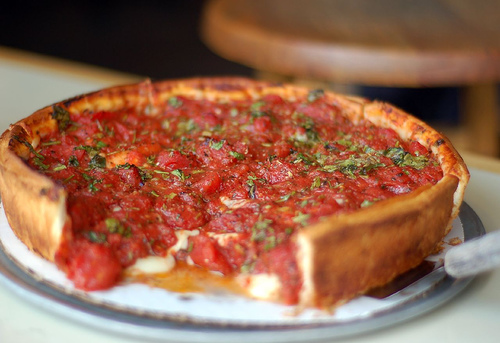 More than anything, though, I’m a snob about pizza.

…as well I should be.  Born in Chicago, in the heart of the land that could be otherwise known as the Land of Pizza and Breadsticks, snobbery when it comes to my selection of pizza is almost a given.  What people that aren’t from Chicago don’t often realize is that it isn’t just about the Chicago-style pizza people typically think of – the deep dish pan with sauce on the top.  It’s about the way it’s made – the spices in the sauce, the quality of the dough, and the proportions of the ingredients that you put on top.  When someone says “Chicago-style pizza,” they aren’t always talking about that heavy, deep dish.  They’re talking about an inherent quality to any style of pizza that is characteristic of anything that you will find in the Chicagoland area.

Perhaps I am just a snob, or I have a bias after growing up in an area where even Pizza Hut served a quality slice of the pie; but as soon as I moved away from the wonderful city that is Chicago, I immediately was confronted with a plain and simple fact:  no one outside of Chicago knows how to make pizza.  Every time I try out a new pizza place, or (worse) go out with others for a slice, I’m confronted with having to put on a Pizza Face – much like a poker face, it is my fake smile and indication of enjoyment, despite the fact that inside I am slowly dying over the atrocity that is sloshing itself around inside of my mouth.

The worst are places like Papa John’s or Santinos, who pride themselves on an excessive amount of toppings.  “Now a full pound of cheese!” is not pizza, it’s a sin.  Or the independent franchises, like Bocalli’s, that leave out essential ingredients to their sauce.  There are the Dominoes of the world that have marked their pizzas down so much in price that you are lucky to get one with anything other than the crust.  There are the imposters, claiming to serve authentic Chicago-style pizza, and yet don’t, like BJ’s.  And then there are the people making their own pizza, at home, using Bisquick for the dough.  This should be illegal.

Pizza is a dish that should be savored; one that should be treated with respect to the artistry that is involved.  Rather than putting on our Pizza Faces, we should be standing up for what’s right and demanding a proper pizza once in a while.  But then again, I could just be a snob.