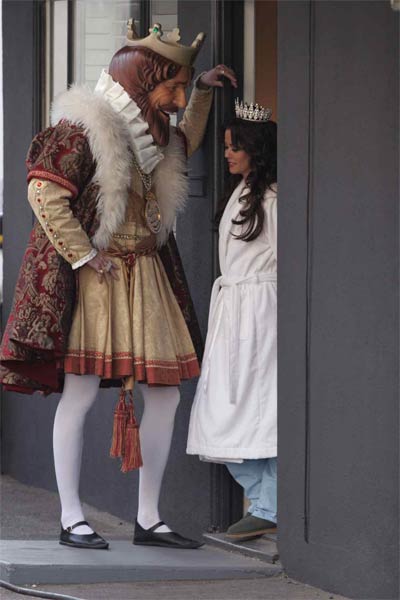 For a very brief stint in high school, I worked as a fast food harlot.  Okay, I wasn’t so much a “harlot” as I was a queen, but you get the point.  I was that girl that you can never understand in the drive thru intercom, who chomps her gum in your face and picks at her nail polish, as if you would have no issue with such a food safety standard.  That was me.  I was the girl who would sit in the office, eating my salad, while taking your order and entering nothing into the computer.  “I’ll have your total at the window.”

But I was in high school, so we can all assume that if I worked in fast food now, I may not be quite so obnoxious.  For one, I would likely empathize with the general public more; for two, if I’m working in fast food at this stage in the game, I’m in no position to walk the line between ’employed’ and ‘fired,’ which I was most certainly doing when acting the way I did at my job in high school.  As time goes on, though, I realize that maybe I wasn’t.

Because I would consider myself to be a better employee in a fast food job, I generally expect others to do the same.  When I pull up to the window of McDonalds to get my daily Diet Coke (I’m addicted, and it has to be fountain DC), and the kid looks like he may not even be old enough to work, legally, I am in no way surprised by incompetence.  But when I pull up and see a woman in her mid- to late-40s, I expect better than that.

Now here’s the thing:  my father loves Burger King.  It’s a horrible habit; and I can’t stand the place myself.  But as he says, when you get to a certain age, you should be able to have the few things you truly enjoy without judgment.  Okay, fine – fair enough Papoo.  Although it would seem that service would be important, especially when he frequents the same Burger King so often.  And yet, time and time again, he returns with a story about something going wrong, always at the hands of the real Burger Queen – a woman quite obviously in (at least) her 40s.  Her name is Deloras, and even when it is sweltering hot out, she wears this long, dirty black cardigan sweater over her uniform.  She is constantly annoyed with my father, a sigh and extra chomp of her gum is standard when he pulls up to the window.  Her hair is generally disheveled, and if I ate the food I am certain there would be some of it in there.

I think, pulling up to the window, my father would get the best of service from this woman, the Burger Queen.  For one, he is a “regular” and in the fast food world, that means a lot.  But more than anything, his orders are generally simple.  It seems insane for him to order a medium Sprite and receive a King sized fry.  It seems ludicrous for him to clearly say “bacon croissant” only to receive a sausage breakfast scramble bowl.   Still, these mishaps go by every time he goes.

The ultimate in insults came the other day when he was given his food and the Burger Queen said to him “please leave the drive thru line, sir.”  I was there, he had been polite.  He asked how she was doing.  He paid, collected his food – and was then ushered out before she had even finished handing him his items.  No time to even put the food down and she was asking him to leave.  It was then that I realized, the horrible service would never end; my father will just put up with it, as all fast food patrons do.  The moral of the story?  Don’t eat fast food if you expect good service.  The real moral of the story?  No matter how bad the service, the Burger Queen seems to always prevail.

2 thoughts on “The Burger Queen”

🕷
😻😻😻 • • • #momlife #momofthree #kids #dinnertime
Flowers for myself, and a balloon for my valentine. Except he already released it to the ceiling... • • • #momlife #valentines #happyvalentinesday #toddler #toddlermom
Cooking and baking my way into my children’s hearts, one holiday at a time. • • • #valentinesday #holidays #baking #momlife #momofthree
If you haven’t been to the Seabee Museum in Port Hueneme, you have to check it out. Phenomenal. • • • #usnavy #seabee #history #homeschool #momlife #fieldtripday
😻😻 • • • #momlife #toddlermom #toddler
It’s apparently arts and crafts night over here. Ava is doing an order for a local preschool for slime. Alexis is making herself a t-shirt that says “The Earth is a Globe.” Carl is painting a Valentine’s Day dinosaur craft. • • • #artsandcrafts #crafts #craftnight #kids #momlife
Carl was not expecting this bird to talk back, and then it said hello. • • • #bird #toddler #aviary #cuckatoo #momlife #toddlermom #fieldtrip #homeschool
I have been in a real funk lately. I feel undervalued. Under appreciated. And more than anything, underpaid. (Stay At Home Mom is one of the few jobs anymore that pays in room and board and that’s it.) More than that, this is my second semester back to school and I just don’t know if it’s going to work out. So today Carl and I stayed in pajamas, stayed in his bedroom all day, and I caught up on school work while he played. The girls did their own thing and chores, and we all survived. But did we? Because I honestly feel like just doing nothing like this everyday and THAT would be awful. Let the moms in your life know they are appreciated, you guys. Let them know they are of value, and for God’s sakes put some of their needs AND wants in the budget too. And do it all over and over and over again. Hopefully tomorrow is a better day. • • • #stayathomemom #momlife #funk #inafunk #momofthree #toddler #dayoff #momsdayoff #life #lifelessons #family #parenting
So it came out pretty tasty. • • • #whatsfordinner #chickenstirfry #dinner #radishes #jasminerice #cooking #momlife
Some days you’re on point with a high protein and fiber rich breakfast...some days you have a waffle and a chocolate muffin. • • • #balance #balancedbreakfast #momlife #toddler #toddlermom #toddlermom #kids #breakfast #breakfastofchampions
When you’re the life of the party, and you’re only 3... • • • #toddler #toddlermom #momlife #alexisis16