I read, recently, that it is considered uncouth to refer to someone as “white trash.”  Granted, saying something like “you are such white trash” probably isn’t exactly polite, sometimes it is warranted.  Reportedly, “white trash” is just not the way you are to brand someone that has the characteristics of, well … white trash.  Other words like “hillbilly” and “trailer trash” are considered preferable in the Mountain William World, so now we have yet another group that is going to change the preference of their designation year after year, after year.  It isn’t bad enough that we have to keep up with the secretaries of the world changing their designated job title to “administrator” or “administrative professional;” or with the teacher’s aids changing to “paraeducators,” now even the gun-toting, sister-marrying, Walmart-shopping, toothless-wonders of the world are getting politically correct.

That’s not the only reason hillbillies annoy me, though.

Hillbillies annoy me because all they talk about is their bowels. 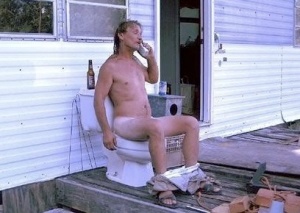 As much as I enjoy hearing someone talk about their bowels ad nauseum (literally), and as wonderful as that one year was when I went to Thanksgiving dinner with an old boyfriend and his grandfather did the “pull my finger” joke at the table six times, it just really annoys me that hillbillies have to involve human fecal matter in everything they do.  Life does exist outside the toilet.

(As a side, the fact that this photo exists, along with a cadre of similar Youtube videos, is disturbing and beyond the threshold of annoying.)

Hillbillies annoy me because they really do all have “Joe” or “Sue” for a middle name.

I can’t even seem to figure this out.  Along with the “Bobby”s and “Tommy”s of the Mountain William World, it seems that all of them have “Joe” or “Sue” for a middle name.  I dated a guy back when I first moved to California who tried so hard to distance himself from his hillbilly family; and yet, inevitably a wedding or anniversary reigned in all the “Tiffany Sue”s and “Billy Joe”s the family had to offer.

Hillbillies annoy me because they seem to have to make perverted comments about everything.

I’m all for the occasional joke about “rolling in the hay” or “if this van’s a rockin'” but hillbillies take it to a whole new level.  For one, I have never been to the zoo and not seen a pair of hillbillies standing by watching turtles making it, snickering and talking about the size of the man-turtle’s manhood.  Even that would be tolerable once in a while, if only hillbillies didn’t always take it to another level altogether.  My mother happens to be dating a full-blown hillbilly (he lives in a trailer), and every time I see him he makes it a point of mentioning just how much they get nasty.  And his perversions show up in every, single thing he talks about – when they took a trip to visit Area 51, he gabbed on and on afterwards about how cool it would be to see aliens do it.  Or how about the hillbillies that put the “5 dollar footlong” shirt on their kids?

Hillbillies annoy me because they talk all kinds of shit and then either lie about it, or act affronted when it comes back to bite them on the ass.

Seriously, this really annoys me.  A hillbilly probably spends 75% of their waking time talking shit about other people, particularly other non-hillbillies that “think they’re better than us.”  Instead of “Joe” or “Sue,” “Drama” should be the real, universal middle name of the hillbilly.  Now, again, I do my own share of smack-talking (don’t lie to yourself, you do too), but when I’m called out for it I don’t lie, act like it’s an affront to my personal character, or use it as a way to talk even more shit.  Not the hillbillies, though. 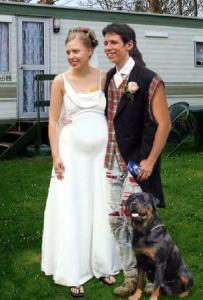 There are a lot of other reasons why hillbillies annoy me.  The overalls, the shirt-less trips to Wal-mart, the lack of teeth and basic dental hygiene – it all reeks to me (in some cases, figuratively; in most cases, literally).  But what really irks me is this notion that I am now to be politically correct in reference to one of the most unpolitically correct group of people in this country, on this planet for that matter.  “White trash” is no longer kosher?  How about we put on some regular clothes and stop making passes at our cousins, and then we can talk about who deserves political correctness.

There’s a reason for the law against you marrying your sister, Bubba Joe … ’cause you’re white trash!