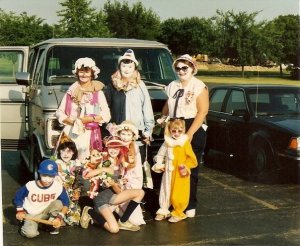 My mother and I pictured right

This will neither be the first, nor the last, time that I blog about my mother.  It’s no secret:  my mother lives an interesting lifestyle (and by interesting I, of course, mean insane).  In twenty-nine years she has given me one bizarre scenario after another:  from crazy boyfriends that claim they’re going on tour with Madonna, to setting me up on a date with a bartender when I was only sixteen.  Today’s phone call did not fail to meet the bar she has set up until this point.

Around 12:30 this afternoon, as I was rushing out the door, I received a phone call from her wherein she announced that this morning her boyfriend and she went down to the courthouse near his trailer in New Mexico and got married.

There are a myriad of reasons why this is a problem.  To start, she’s known the guy for roughly nine months, although every time I have mentioned that to her she reminds me that they both grew up in the same area so “essentially have known each other all along.”  Of that nine months, my mother has spent roughly six actual weeks with him, physically (the remainder of the relationship being over the telephone).  He told me six months ago that he was going to visit his daughter at school in Texas, only for him to reveal to everyone last week that he really had not communicated with any of his four daughters in over twelve years.  But it gets worse.  Since he and my mother met, he has “intended” on selling his home in New Mexico, but one debacle after another comes up, including a scene where the real estate agent reportedly punched out the guy at the bank of a prospective buyer; right now the story is that the real estate agent is in jail for an unrelated offense.  The crowning glory of the lies this guy has told was when he announced to everyone in my mother’s family that he was diagnosed with malignant cancer.  When I questioned a few things he said (mainly that his doctor supposedly said it would be alright to continue smoking two packs of cigarettes a day), three hours later he “miraculously” received a phone call with the news that his biopsy had incorrectly shown a malignant cancer, and it was really just a bacterial infection that a five-day course of Zithromax would clear up.  The line between fact and fiction with this guy is beyond blurry, so quite obviously my response to the whole situation of them getting married earlier today can be summed up in something I said to a friend in response:  I don’t know if I should be sending her a card or staging an intervention.

So that’s the update on my mother, now to the relevance of it all.  In previous times that I have blogged about my mother, people have given me mixed responses.  Some have said that the candid humility I share my life’s story with is humbling.  This I consider a compliment:  my experiences with my mother and the characters she involves herself with are truly dysfunctional; to hide them would be to do nothing more than contribute to that very dysfunction.  For every time my mother has done something nice for me, she has followed that up with ten steps of hurt.  From abandoning me when I was ten, to exposing me to sex way earlier than any kid should be exposed; from stealing money and things from me, to spreading lies within her family about me and my contribution to her hardships – my mother has run me and my family through the gamut.  Talking about things that have happened is by far the healthiest thing a person can do in a situation like this.  And, anyway, beyond finding solace in honesty, if my mother didn’t want people to be talking about the things she does, well faithful blog followers, then she shouldn’t have done them.

But there has been another type of response to the blogs I have written about my mother, specifically more negative ones.  Some have said that I have gone against the very essence of a family’s value; that in a family these things happen and you just deal because it’s family.  Others have said that I owe my mother life and for that she can lie, cheat, steal, scandalize, abuse, use, and abandon me and my family all she wants.  On the day of my mother’s wedding, when she has ignored the advise of others and yet still expected them to come to her aid, I think now is the time to address these more negative responses.

One person said that I “should be ashamed to spread the business” of my mother around “like she’s anyone other than the person that gave me life.”  In response to that I simply reiterate that I carry myself with the utmost level of honesty that I can, so to lie about it would be against the very fabric of who I am.  To further that, I would have to argue that financially, physically, emotionally, mentally, and even spiritually, I have repaid my mother for the life she gave me about fifty times over.

Another person responded that “one day” I will “regret such hostility towards her,” to which I question exactly where anyone finds hostility in honesty?  Here is where the real lesson comes in:  somewhere, somehow, our society morphed into this family-values-loving culture that defines everything by what is right for the family, rather than what is right for the betterment of our souls.  There are so many dysfunctional situations out there, in so many families, that are simply glossed over or turned a blind eye to merely for the sake of preserving the family.  And while it’s true that the reason why I continue to tolerate my mother’s shenanigans, time and time again, is because she is family, at some point I most certainly will say that enough is enough.  I will not regret it, either; in fact, no one should regret making the decision to be honest and true to themselves and their happiness.  There’s an old saying:  “some of the worst people I know are members of my family.”  I think this applies to a lot of familial situations and to stand by and let it go on is one of the most morally reprehensible things a person can do.

There are a lot of things in this world that are wrong and it is only in our refusal to confront those things head-on that they continue to persevere.  It’s time for everyone to stand up to the bad mothers, the emotionally distant fathers, the dysfunctional cousins, the rumor-mongering siblings, and every other injustice that they see happening on a daily basis in their every-day lives.  Blog about it, write about it, Tweet about it – whatever it is you need to do to prevent yourself from becoming no better than them.  That is the real lesson to be learned here, faithful blog followers:  in truth and what is right, rather than in lies and what is proper, is where we find our salvation.

Alexis is making friendship bracelets. Ava is standing on the bed. Carl is playing with power tools and eating watermelon. Your average evening. • • • #momlife #quarantinedays
The Easter bunny may be canceled, but we at least have Easter dinosaurs at our disposal. • • • #easter #spring #dinosaurs #toddler #toddlerlife #momlife
😍
We don’t do Saint Patrick’s Day, and yet here we are. • • • #baking #cupcakes #saintpatricks #stpats #luckotheirish
Thank goodness we were stocked on the essentials. • • • #food #cheesetray #cheeseboard #coronavirus #quarantine
Raise your hand if your kid wants you to watch their sport, but also prefers to play from the furthest distance from you. 🤷🏻‍♀️🙋🏻‍♀️😂 • • • #ava #fromadistance #tennis #teamtennis #jtt #usta #scta #tennismom #momlife #kids #fromadistance #leftie
And then we came home and dyed our hair. • • • #tennis #tennismom #kids #winner #tennislife #momlife #momofthree #scta
I have a 16 year old with endometriosis and migraine headaches. She’s also in high school and trying to set herself up for a successful future. I have a 12 year old readying herself for high school, and also going through puberty. And I have a three year who is, well, three. If you are coming to me for anything but to love and support me, go away. I deserve just as much as anyone else. • • • #dontatme #momlife #momofthree #kids #teenager #tween #toddler #toddlermom #roughpatch #support #hugamomtoday #kids #parenting #stayathomemom #sahm
I’ve been looking for a backpack for Carl for about six months, now. Everything was either way too big for a three year old, way too small to hold his things, or ugly. Finally I found this today at Carter’s, and it was cheap. Now I don’t have to worry about losing his crayons or books anymore when we go to the library. • • • #babysfirstbackpack #homeschool #preschool #3yearpreschool #toddler #toddlerlife #schoolsupplies #momlife #homeschoolmom #toddlermom
No bed quite as comfy as Mom. • • • #momlife #toddler #toddlermom
*cuddle* • • • #momlife #tween #ava
I had to turn in some stuff at school today, and on the way home we decided to go to Barnes and Noble. In the cafe they had Elmo cookies. SO ADORABLE. • • • #toddler #toddlerlife #momlife #toddlermom #momofthree #elmo #elmocookie