Today I came across a blog on cracked.com which discussed (satirically, I might add) some of the progressive parenting trends that are almost difficult to believe are real.  The article was originally spurred by some controversy over a video that went viral a while back on Youtube of a woman flipping her baby around, claiming it was yoga.

The video, itself, is disturbing, but the idea it brings up (which the blog addresses) is yet another notion that the birthers have struck upon us.  In the name of being progressive, and of doing everything they can to raise their child the right way, it seems they have gone off the deep end.  You all remember my first blog on this new sight.  Titled Birthers, I discussed the fact that it seems new parents today tend to think they are the only people on the planet to ever have and raise a child; as if their experience is wholly unique, even though women have been successfully having and raising babies for the entire course of human history.  After witnessing and even being involved in some vehement discussions on what is right for infants and children, on topics from breastfeeding to pacifiers, brand of diapers to the pros and cons of placing your child into daycare, today’s birthers have become unrelenting (and often ignorant) in their positions on all-things-children that they will undoubtably fight about to the death, even in the face of knowing they are wrong. 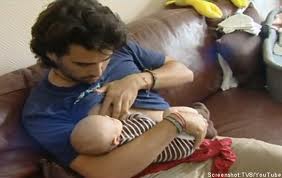 Here is one of those things that the birthers of a more “progressive parenting” generation have begun to embrace:  the breastfeeding dad.  Breastfeeding, itself, is a controversial topic.  While science has proven that breastfeeding is (in most cases) beneficial for baby, the best way to do it (nurse versus pump), how long to do it (less than one year versus up to eight years), whether to supplement with formula; not to mention the issue of nursing in public, have all become topics of bitter debate that women will break entire friendships over if everyone is not in agreement.  Breastfeeding dads are another one of those topics.

Reportedly, a man has two options to breastfeed a baby:  (1) he can wear a handy-dandy milk-filled arm strap that simulates the mother feeding the baby; or, (2) he can actually induce lactation over time and make the milk for the baby himself.  Beyond the initial shock of this idea, alone, there is a very serious problem with breastfeeding dads:  that problem being gender confusion.  Let’s not pretend we are living in some tribal state in South America, or even in Eastern Europe, where cultural understandings of mom and dad’s roles are much different all around.  Even in the United States, where families are defined in a number of unique ways (particularly those in gay couples), there is still a general consensus that each family provide motherly and fatherly characteristics in the Western World.  Empirical science – psychological, sociological, and neurological studies – have proven that this is a necessity to children growing up in this and other Western countries.  To muddy those waters by not keeping boundaries around certain child-rearing behaviors (including breastfeeding) raises concern as to the long-term psychological and sociological affects of such an action.

Are the birthers right in the controversy over the breastfeeding dads?  As of right now, all we have is the research, which suggests to us no.  In the end, whether anyone is right or wrong is not really the issue.  The issue is the absolutely stubborn inability of birthers to accept any position other than their own.  Ignorance and refusal to look at factors other than our own opinions is perhaps the most dangerous thing we, as a society, can do for our children.  In all the time the birthers spend defending what they think is right, they really do nothing more than show just how wrong we all can be.

One Reply to “Breastfeeding Dads, or Birthers Strike Again”