Okay, for real.  What is going on with people and their obsessions with the bathroom?  I see three arenas where this has become entirely out of control:

The only thing worse than the level of jokes about flatulence in children’s programming and major motion pictures is when they break out the testicular humor.  But seriously, what kind of values can we possibly be teaching children when every other word out of the mouths of the characters that are to give them moral rigor is followed up with a “pull my finger” joke?

2) Flatulence and Other Related Sounds on Phone and Tablet Apps

I don’t know about you, but I did not buy my iPad, nor my HTC EVO, to put applications on them that can reproduce (at the most inopportune time) the loud sounds of activities normally reserved for the bathroom.  What is so funny about this?  I really don’t understand.  There was this woman that I used to work with that would eat about six deviled eggs every day at lunch.  The effects about an hour after she came back are obvious; but no one giggled and laughed like children when it happened.  In fact, we all did quite the opposite.  It made us act more professional and busy to avoid the inevitably awkward eye contact.

Every day I check my site statistics to see who has been visiting my website, what they’ve been looking at, and how they’ve gotten here.  Included in the latter part is a list of search terms that led people to my site – search terms I often take amusement from.  More than anything, though, people are coming to my blog by searching things such as “hillbilly on toilet” and “old hillbilly on toilet.”  It’s my fault, really:  I started it all by blogging about hillbillies so often.  They are a popular subject it seems, not to mention a pet peeve of mine.  And to top it off, I have included one photograph of a hillbilly on his toilet outside, only because it was the first thing that came up when I searched in Google Images “hillbilly outside.”  But why are so many people searching this?  It is literally multiple searches, every single day! 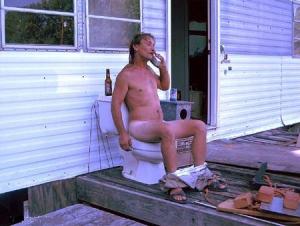 When I began to look into it more, though, I learned it is more than just people’s obsession with hillbillies on toilets.  It’s people’s obsession with all people on toilets.  On YouTube, searching “on toilet” brings up literally thousands of responses – some of which are pranks, where a person was secretly filming another on the toilet; others are people just videoing themselves and uploading it (why?!); even one is someone that is making his own homemade talk show, filmed while he sits daily in the John:  “Toilet Talk With Catterton.”

What is it about toilet humor that is … well, so humorous?  Is this really the level of whit we have dumbed ourselves down to?  I’m all for a dirty joke or two once in a while – but this toilet talk is just out of control.  To me, this is just another sign that our culture is becoming stupider and stupider; and that in our culture of excess, we overdo everything – even our toilet humor.  It would be wonderful if I could see a kid’s movie just once that doesn’t include anal jokes; or walk through the mall to get my rings cleaned and pick up my makeup at Sephora without hearing those ridiculous apps echoing throughout the entire shopping center.  I get it:  people think it’s funny.  A lot of people in this world are rednecks, and rednecks love the synthesis of their two favorite things:  jokes and toilets.  I understand completely.  But at this level?  Seriously?