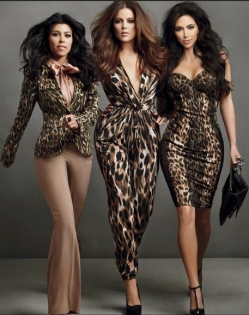 Am I the only person on the planet that isn’t a fan of the Kardashians?  I mean, it’s cool to say they’re overindulgent whorelets and all … but in the end, most of the people that claim to hate them watch more of their shows than anyone else.  When I say “not a fan,” I mean really not a fan.

I’m not entirely sure why I don’t like them (except of the fact that I don’t really like many people … or things ……).  They are just typical Californians:  self-indulgent, promiscuous, loose-moralled, foul-mouthed, and obsessed with being as trendy as possible.

Possibly it’s because about a year ago we sat behind them at a Lakers game and I got the real inside scoop (so to speak) of their regular activities.  I’m not a Laker fan, in fact I hate them (BULLS!); so obviously I was more interested in what was going on around us than the actual game.  While Khloe seemed more devoted to her man than hob-knobbing like her mom was, I think that all of them put their phones away for all of thirty seconds on the entire game clock.  Having never watched their shows, I was also pretty surprised to learn that Kris is super nosy in the matters of her adult children’s lives – every time one was texting or Facebooking, she was (literally) leaning over their shoulders reading what was being said.  The only thing that really reeked through the entire experience, which might have lead to my general dislike of them, was that Khloe kept brushing her nappy, dandruffy hair at me (we were sitting directly behind them in small folding chairs).  At one point some of her hair wound up in my nachos.

And have any of you ever heard that retarded song Kim did on auto-tune?  It’s astonishing how horribly that girl sings, and auto-tune did little to help it.  Probably this has a big part in my general disdain for the family of excess; although, not for the reason you’d think.  I don’t care all that much that another crappy song was released .. this happens every day.  What I care about is that these girls have become so insanely popular that even their crappy songs are inspiring massive levels of stupidity, like these broads (who have made their own music video to Jam (Turn It Up)):

I also wonder if it has anything to do with just how much the three sisters (Khloe, Kourtney, and Kim) are plastered all over the place.  On billboards in LA, on magazines in the grocery store, everywhere on TV, all over my Google News even.  I can’t even go to the mall without being forced to look at the ads for their ridiculous new underwear line at Sears.  (And the thing that shocks me about that is the fact that Sears is so below their typical fashion senses.)  They are just everywhere:  but why?

I still cannot even really figure out what these people have done to be as famous as they are.  It’s as though they are famous just because they were famous; or famous for being so famous.  In any event, I don’t care about Kim’s wedding footage on E!, just as I could give two shits about who is having a baby and what that poor child of Kourtney and Scott is up to.  You have to really question what is with our culture that we obsess over the lives of people that have absolutely no idea any of us exist.