Yippy!  This is my 100th blog post!  Excitement abound at the Schmidt Ranch, and of course by excitement I mean me (in pajamas) skipping around the house and sipping an extra large bottle of bubbly, Canada Dry ginger ale.

For me, faithful blog followers, this is an exciting day.  That I have had enough things to bitch and complain about to constitute one hundred entire blog postings is, in itself, something exciting.  But it also may not be surprising – I have a whole cadre of things filed away in my head, just waiting to get out.  The topics have been varied, although it is obvious what my pet peeves are:  stupid people, hipsters, hillbillies, poor use of the English language, things that put me either in danger or at an inconvenience, and … well, basically the rest of humanity.

So for my 100th post, though, I wanted to do something different.  While it is the B(itch)log, I thought it would be nice if I didn’t bitch for once.  Instead, I thought I would talk about something more positive:  My Revised List of Things I Want To Do Before I Turn 30.  I decided to do this for my 100th blog post, mainly because hitting 100 posts was one of those things I recently added to the list of things I want to do before I turn 30; also, because I am just a few, short days away from 6 months out from the big 3-0.  For years (actually over a decade), I had this extensive list that I wanted to achieve, all of which I have failed to do.  So recently, I started scaling back and accepting that I probably won’t publish that book or finish that Ph.D. in the next six months.  That doesn’t mean I can’t do some things, though.  So here we go, and I am counting on you, faithful blog followers, in keeping me on task:

1.  Finish 40 books for the calendar year 2011 and get a good start on 40 for 2012.  At the beginning of this year, I decided I was going to keep track of the books I read and try to read as many quality books as I could before December 31st.  Now that we are nearing the end of the year, I am within site of 40 and think I can do it.  I have just finished numbers 30 and 31 … just a few more to go.  For my completed list, click here!

2.  Go on a date with Wolf Blitzer.  I know, sounds psychotic, right?  A week or so ago, I blogged about my hatred of Chicago news-weatherman Tom Skilling and in it mentioned that I have a secret love of Wolf Blitzer.  After that blog went out, people emailed me, Facebooked me, and even asked me in person what it was that gave me the hots for Wolf.  In truth, I can’t explain it.  But as I grasped for any reason to give people, I realized that I really do have an infatuation with most news anchors that are as hard-hitting as Blitzer is.  Since my chances of even coming in contact with Wolf Blitzer, let alone going on a date with him without finding myself in divorce court shortly thereafter, though, are slim and none … not to mention I would probably pee my pants if Wolf, Chris Matthews, or any of the other dream-teamers were actually in the same room as me … see photoshop below.  Mission accomplished?  I think so!

3.  Prove to myself once and for all that I am going to stop letting what other people say influence me so much.  A few weeks ago, I realized that I spend more time writing as an author based on what other people suggest and what other people are going to want, rather than what I want to write and what I know is good.  This is something that, unfortunately, is in almost every aspect of my life:  I let myself get pushed around by the wishes of others rather than either a compromise or what I know is right.  Before I turn 30, I want to prove it to myself that I am working to get over this (sometimes crippling) fault:  be it in my writing, my blog, or some other arbitrary aspect of my life. 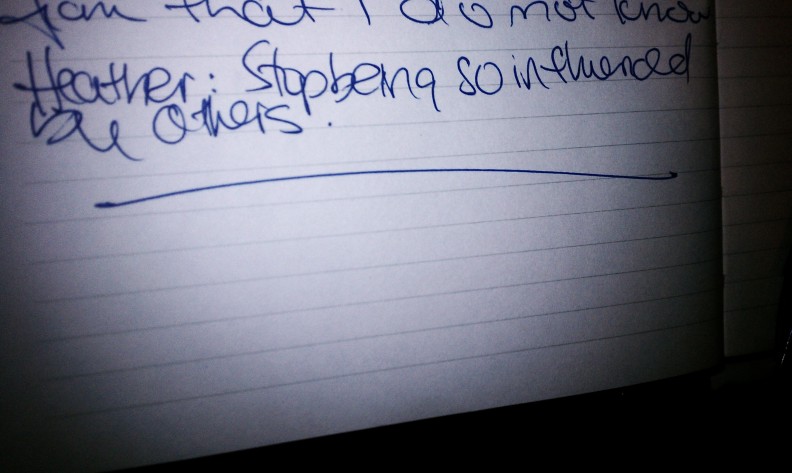 4.  Buy a plane ticket to take a trip home sometime in 2012.  This is a big psychological problem for me, mainly because I know that flying home to sweet home Chicago will make it very difficult for me to get on the return plane home.  I am that homesick that often.  But I have missed so much in the last decade of my absence that to continue to forestall a trip back is just plain assholish of me to do.  It’s time for me to put on my big girl pants and buy myself a trip home.  While I know it won’t be the same as it was a decade ago (when I was last there), I also know that there is so much there I need to see and do before I turn the page to the next chapter (so to speak).

6.  Eat sushi.  I have never eaten sushi – real sushi, that is – and yet every time we go out for Japanese food (which is frequently), I pine after it.  I have no idea what my fear of it is – probably the fact that I don’t really like fish all that much, as well as the fear that I would develop deadly tomaine poisoning – but I want to get over it and try it, just once.

That’s six things, as compared to my prior list of twenty-five (which you do not even want to read, it is that sad).  If you count my 100th blog post, which I am now about to hit “publish” on, that is seven; I think manageable given the time frame and my idiosyncrasies.  Let’s knock another one off that list … right ….. now …. this was on our way out for a nice, celebratory dinner in honor of my 100th blog post (in my head, that is) …………. the only thing needed is an audio file you faithful blog followers could play over and over of me going “Oh Wolf!”

Happy 100 Blog Followers!!  Thanks for reading!