My first post on this new blog site was called Birthers, and I have blogged on the topic many times since.  Ultimately, I think that people today have taken having babies (something done for millions of years) to whole new levels of narcissism and stupidity.  It isn’t just the tendency of parents to be obsessive compulsive, and as a result completely uneducated in the decisions they make for their children.  It also isn’t only the breastfeeding dads or the pictures of dirty diapers on Facebook.  The truth is that I think the Birthers have gone wild – in the entire process of birthing; from conception to high school graduation.

It seems as if these Birthers – the narcissistic newbie parents that truly believe they are the first people ever to have children – actually get some rise out of being so pompous and obsessed with their job as parents.  You can see it in the way they judge others for parenting in a different style than theirs, or in the way their lives become 100% focused on their child.  I used to have pregnant friends for whom pregnancy was just another thing in the day – now that baby belly is the center for which all things revolve.  You can see it in the monthly baby belly pics posted on Facebook or TwitPics.  And while I can consider that you are (literally) carrying the little tike with you 24/7, and it is a major life thing that is coming down the pipeline (so to speak), it would be a pretty major thing on your mind quite often; however, there are still things to life besides having those babies.

But I think what has happened is our entire culture has become so obsessed over almost every thing we do that these Birthers now have their non-stop talk of birthing and rearing as an outlet to truly express just how much they get off on the entire process.  Whereas before, being a parent was another thing in the list of what we did as human beings, the Birthers have let birthing define their very essence.  Of course, then, it’s no-holds-barred in a world where everything revolves around the process of conceiving, delivering, and raising children.  Coupled with the redefinition (read: loss) of privacy and we are now all inundated with the things put out there by the people for whom babies are the center of the universe.

Today I went on Facebook and saw that one of my friends had gone into labor.  She posted frequent updates through the course of the experience and it bothered me how extremely personal the update the comments that followed were.  While I scrolled through the comments to get to the bottom to post my simple “congratulations,” I was reminded of that episode of I Love Lucy when Lucy has the baby and you see nothing except Ricky pacing around the waiting room.  There was no detail about her epidural; no discussion about squeezing anything from Lucy’s hoo-haa – just Ricky pacing around the waiting room, I think smoking a cigarette.  I’m not suggesting that the process of giving birth is something to hide or to be ashamed of, I’m simply saying that it is an intensely personal thing that is not always a cutesy “hee hee, hoo hoo.”

To put it a little more bluntly, if someone wants to spread their vag and everything that comes out of it around for the public to see, the least they could do is consider how that makes the rest of us feel. 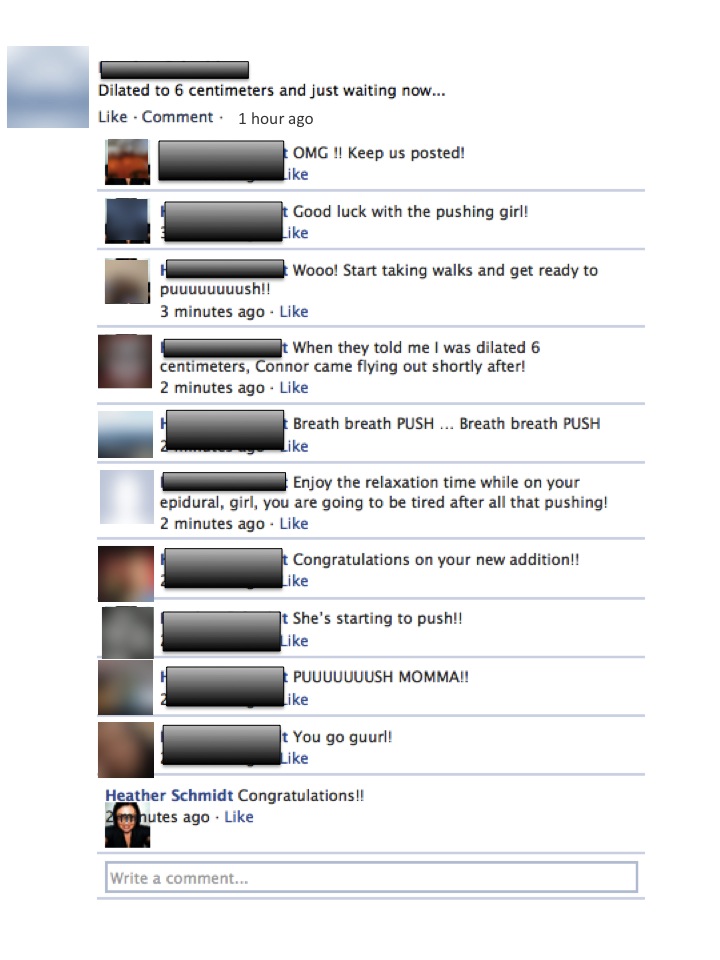 Another example of how the Birthers have gone wild is in their ridiculous characterization of what it is to give birth.  Halloween is just around the corner and people are going above and beyond the call of traditional pumpkin carving to come up with the most unique pumpkins they can.  Along with this obsession over birthing, the Birthers have taken to putting that obsession in their Halloween decor.  When I started seeing some of the absurd things the Birthers had come up with was when I actually accepted that the Birthers have gone completely wild.  Consider these three pumpkin sculptures – each of which appear to have gone viral on Facebook; each of which get more and more graphic as you go down the line: 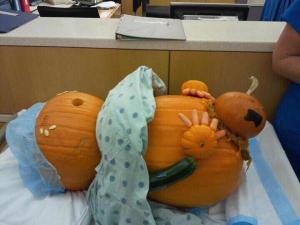 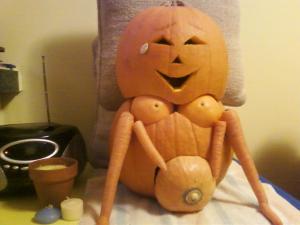 It seems that the graphic sharing of the process of giving birth has transcended to an all new level with these pumpkins.  And I thought the daily updates on Facebook and personal blog posts, or the countless graphic videos on YouTube, were bad enough.  As I said, giving birth to a child is an extremely personal, (and for many people) a private thing.  Additionally, it’s a beautiful thing – absolutely astonishing.  That another human being can come of tiny specs of D.N.A. is – in itself – awe inspiring.  To devalue such a mysterious and often miraculous thing with sharing every single detail – from the fertility treatments to the end of bottle feeding – is (in a way) disrespectful of the wondrous experience of bringing life into this world.  Worse, to put it on a pumpkin – to debase an experience that is different and unique for literally every woman (or couple) out there, is a little insulting.  As a woman, I am disgusted that someone would carve a vagina with a baby coming through it onto the side of a pumpkin.  It was bad enough when the Birthers acted as though they were the first people on the planet to have a baby; and it was certainly horrific when men began trying to induce lactation to breastfeed.  I still don’t want to see photographs of your child’s dirty diapers, just as I don’t want to hear all the details of your baby moving down through your birth canal.  To the Birthers Gone Wild:  stop turning the experience of having children into such a joke.  Your antics, your stupidity, and now your pumpkins.