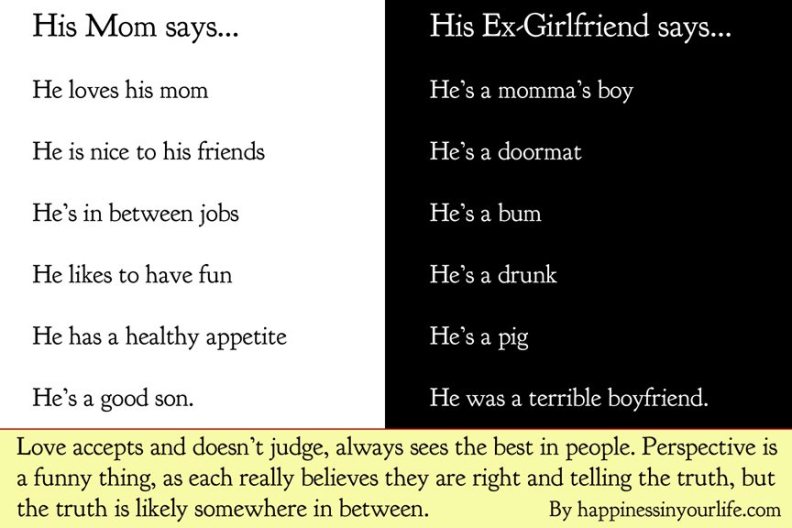 This image was posted on Facebook by one of my friends.  It was a repost, so I cannot fault her too much for it – but as soon as I read it, I knew I would have to blog about it.  Clearly, this was written by some fifty or sixty year old woman, likely going through the emotions behind an impending empty nest.  Possibly her grown man of a son has not left the nest, though; maybe he just returned home after a bad breakup.  I imagine the son of this mother to be in his thirties.  Possibly employed, very probably still breastfeeding every night before padding off to bed in his jam-jams.

So what is my problem with this, you faithful blog followers might ask?  A lot.  When I read the line at the bottom and considered some of my own experiences in life, I realized that this is a terribly biased and wholly judgmental thing to assert – and it uses the veil of not judging as a way to do so.  Let’s examine its assertions:

His Mom says:  He loves his mom

As with all things, I believe there is a fine line between going overboard with anything and being reasonable.  A card and call on Mother’s Day and birthdays?  Probably a good idea.  Dropping everything and flying across the country, using money you don’t have to do so, to take your mom out for Mother’s Day brunch when you just lost your job?  Probably a momma’s boy.  Making a phone call to see how mom is doing once a week?  A nice gesture.  Calling every day and never moving more than fifty miles away from mommy so that you can continue to come suckle on her teet whenever she rings the teet bell?  Over the top.

A few years back, I was dating a guy that invited me to go out to brunch with him and his mother on Mother’s Day.  His brother was going as well and we were all going to have a nice time.  After a phone call with mommy, though, there was a sudden change of heart and I was left at home to go find myself some Quizno’s while mommy had her special time with her boys.  I wouldn’t have minded being left behind on Mother’s Day if only I hadn’t actually already been invited.  A few days before then, I had gone along with them when they bought her a gift card to buy new sheets for her bed – a $100 gift card I might add (that, combined with the expensive brunch, is more money than I have spent in all 29 Mother’s Days since I was born).  A few days after I was left behind while they went out to brunch, I was at lunch with her and a group of their family and friends (a “lady’s lunch”) and she spent the entire time complaining that my boyfriend and his brother had not done enough for her for Mother’s Day that year.  I almost vomited up my entire lady’s lunch at the sound of her ungratefulness, as well as the realization that I was dating what could unambiguously be coined:  a momma’s boy.

His Mom says:  He is nice to his friends

His Ex-Girlfriend says:  He’s a doormat

Some time ago I had a male friend that I saw get walked all over time and again by his friends.  His mom always said “oh … isn’t Matthew so nice to his friends,” and yet I sat back and watched him get screwed (literally) countless times.  One time a friend asked to borrow money – this being a friend that had showed himself to lie, not pay back debts, and who used cocaine.  Matthew didn’t want to loan him any money because he knew it would be used for drugs, but his mom convinced him otherwise with a simple “oh … Matthew, you were always so nice to your friends before you started hanging out with girls” (whatever that meant..).  So he loaned the friend some money and two days later the guy was arrested for possession of cocaine.  Matthew never saw his money again.  As in the case above, there is a fine line between being nice to your friends and being a push over.  Generally it’s when adult children have no boundaries with their parents that they also have a similar lack of boundaries with friends, as well as work.  All people – men and women – should set a line and never cross it – with anyone; although, mothers often no longer teach this boundary setting because then their kids will set boundaries on them as well.

His Mom says:  He’s in between jobs

His Ex-Girlfriend says:  He’s a bum

Do I even need to justify this one with a response?  As with a lot of helicopter parents that do not teach their kids any kind of responsibility, as well as with the situations of men sitting in their parents’ basements playing video games rather than getting a job, the “he’s in between jobs” is simply excusing the fact that your son is unemployed (many times by no fault of his own, many other times by much fault..)  Just because a person calls something other than what it is, or is equivocal enough to leave room for excuses, does not change the reality of the situation.

His Mom says:  He likes to have fun

His Ex-Girlfriend says:  He’s a drunk

There is a kid that lives next door to my father, that graduated from high school in May.  Every day he roams out of the house around noon in his robe, where he sits on the front porch drinking beer until his parents get home from work (did I mention he is only eighteen?).  He does not go to school.  He is not looking for a job.  Three or four nights a week he disappears around eight in the evening and comes home the next morning, often still drunk or high from the previous night’s events.  His mom says “he likes to have fun” and that he is just taking a year off to explore his options – on their dime.  Need I say more?

His Mom says:  He has a healthy appetite

His Ex-Girlfriend says:  He’s a pig

At the end of that little inspirational picture that my friend posted on her Facebook page this morning (pictured above), it says that “…truth is likely somewhere in between.”  This is the one example of those “perspectives,” though, that I would actually agree is likely a matter of the truth (of more cases than not) being somewhere in the middle.  If someone eats excessively and has undiagnosed or untreated health problems, or spends more time sitting on the couch shoving hotdogs down his face than actually moving around, then chances are he’s closer to being a pig.  But if he is physically fit, has no untreated health problems, and just eats big meals, then he maybe does just have a healthy appetite.

One thing to remember, though, is that unhealthy eating habits always catch up with you eventually.  Excusing porking down six whopper-sized burgers as a “healthy appetite” because your son doesn’t gain weight quickly (right now) is never okay.

His Ex-Girlfriend says:  He was a terrible boyfriend

The bottom line is that if the guy really does treat you borderline-assholish to cow-tow to mommy, if he isn’t just nice but lets himself get pushed around, if he spends all his time on the couch rather than looking for a job and paying his own bills, and is drunk most days before three o’clock in the afternoon – saying “he was a terrible boyfriend” is probably much more accurate than saying he is a good son.  Ultimately, what love does more than “accepts and doesn’t judge” is allow bias to completely blind a person from seeing what is really going on right in front of their eyes.  One of a mother’s principle responsibilities to her son is not to excuse his bad behaviors, or enable him to be irresponsible; it is to teach him to be able to go out in the world as an adult and make it on his own.  To form lasting relationships.  To have the street smarts to not get screwed over.  To have the economic smarts to make wise decisions and to do everything he can to stay gainfully employed.  To have the emotional understanding and morality to do what is not only fiscally responsible, but morally right.  It is to teach someone to be an upstanding citizen in the world, who can survive without still having to thrive on mom’s milk.  Before teaching people that a negative or less-than-nice perspective of someone’s son is a bad thing, consider how well-adjusted in life and relationships he is outside of his mother’s arms.