Today was a day of absolutely not one iota of thanks, and I’m pretty annoyed by it.

This isn’t even necessarily about one person in particular (although I will call all those that should have thanked me out in just a moment); this is about the fact that it seems people in general just don’t know how to say the simplest words to let someone know you appreciate them. Thank you. See how easy that was? But no one seems to say it anymore. Is this because people feel that they are entitled to things? Or because they just assume that the person they should be thanking knows they are appreciated?

Well I now have a list of people who owe me a ‘thank you’ for things I did for them today. They also owe me an apology for having to be told to do so.

#3 The old lady in line at Ralph’s that I let go in front of me. 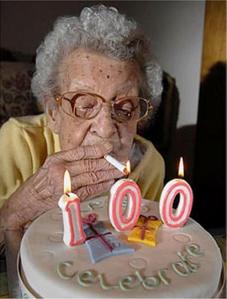 This was somewhat innocuous compared to the other two, but the old battlax still should have thanked me. I had a cart full of items; she a simple hand basket of steaks and Grey Goose vodka. She looked about 100 years old, and a little like she was going to keel over if she didn’t rush home and start shoveling that steak, so I figured I would nicely let her go ahead of me.

The old bitch did not smile. She did not thank me. She just pushed in front of me and proceeded to be a bitch to the clerk.

I’m sure many of you faithful blog followers have known the joys of letting someone pull out in front of you in a parking lot or on a busy street only for them to not wave a ‘thanks.’ This seems to have been somewhat along the same lines. What has happened to being courteous and polite to your fellow community members?

My mother is returning to her husband in New Mexico at the beginning of next week, so has been spending an inordinate amount of time with us before she bids a fond adieu. Of course this means she’s eating all of our food and tagging along every time we go to get something to eat – including tonight. I bought her a sandwich and soup tonight at the deli I stopped at to grab a salad for myself. Before going, I asked what she wanted and when I got home with the food she did not even offer to pay for it, or thank me in return for the scrumptious and healthy meal.

I have paid my mother back probably 1,000 times over for giving me life – in more ways than just monetary, obligatory, or otherwise. The least the bitch could have done was thank me for the fucking sandwich.

This one really roasts my goat.

As you all know, I’m going on vacation – a metaphorical one, followed by a literal one. After this week, I’ve declared myself “off” from drama, family, obligations, etc. and then in March I’m going on a three week trip to my sweet hometown in the suburbs of Chicago. For all intents and purposes, I’m checking out until my 30th birthday on April 15th. So this week I’m getting everything ready for such an hiatus – spring cleaning, organizing the apartment, stocking up on things, catching up on laundry, and getting stuff prepared for our trip.

One of the things I wanted to do for my husband – because I’m nice and care about his quality of life – was prepare and freeze meals for him to eat while we are gone. Every time we talk about the vacation, people tease him because he is staying behind to spend one-on-one time with his true love: work. But he gets home pretty late in the evening, and has pretty long days to begin with, so I thought I’d be a sweetheart and make him about fifteen day’s worth of dinners, and took the opportunity to make him things I know he enjoys but that I cannot stand (so, in other words, dishes we don’t often eat). This had nothing to do with him being unable to do it, just me wanting to be nice.

But just because I wanted to be nice didn’t mean I shouldn’t be thanked for it.

I spent a total of six hours today making him these fifteen meals. Each was made from scratch. Each was made with fresh ingredients. Each involved planning, thought, and a lot of preparation. After six hours, my feet hurt and I don’t want to cook for a year, but I did it and when I was done let him know about it. I even emailed him a photograph – mostly because I was proud that I had actually done it.

My email was ignored. My later email about the Keurig waste controversy was not ignored… no, he had plenty to say about that.

I don’t want it to seem like I’m one of those people that does things just to get a ‘thank you.’ You know those people that do charity just to get the awards and the recognition for being so philanthropic. I’m not one of those people in any way, shape, or form. The truth is that I haven’t been thanked by some of these people all along and I still do it all to be nice, because that’s who I want to be. But it would also feel good to know that I’m not being taken for granted as well – maybe then I wouldn’t feel as burned out as I do now. Just because people want to do nice things doesn’t mean they shouldn’t be shown appreciation for it. And appreciating the people that are in your life is sometimes as simple as two words: ‘thank you’.

6 thoughts on “Ever Heard of the Term ‘Thank You’?”

😻😻😻 • • • #momlife #momofthree #kids #dinnertime
Flowers for myself, and a balloon for my valentine. Except he already released it to the ceiling... • • • #momlife #valentines #happyvalentinesday #toddler #toddlermom
Cooking and baking my way into my children’s hearts, one holiday at a time. • • • #valentinesday #holidays #baking #momlife #momofthree
If you haven’t been to the Seabee Museum in Port Hueneme, you have to check it out. Phenomenal. • • • #usnavy #seabee #history #homeschool #momlife #fieldtripday
😻😻 • • • #momlife #toddlermom #toddler
It’s apparently arts and crafts night over here. Ava is doing an order for a local preschool for slime. Alexis is making herself a t-shirt that says “The Earth is a Globe.” Carl is painting a Valentine’s Day dinosaur craft. • • • #artsandcrafts #crafts #craftnight #kids #momlife
Carl was not expecting this bird to talk back, and then it said hello. • • • #bird #toddler #aviary #cuckatoo #momlife #toddlermom #fieldtrip #homeschool
I have been in a real funk lately. I feel undervalued. Under appreciated. And more than anything, underpaid. (Stay At Home Mom is one of the few jobs anymore that pays in room and board and that’s it.) More than that, this is my second semester back to school and I just don’t know if it’s going to work out. So today Carl and I stayed in pajamas, stayed in his bedroom all day, and I caught up on school work while he played. The girls did their own thing and chores, and we all survived. But did we? Because I honestly feel like just doing nothing like this everyday and THAT would be awful. Let the moms in your life know they are appreciated, you guys. Let them know they are of value, and for God’s sakes put some of their needs AND wants in the budget too. And do it all over and over and over again. Hopefully tomorrow is a better day. • • • #stayathomemom #momlife #funk #inafunk #momofthree #toddler #dayoff #momsdayoff #life #lifelessons #family #parenting
So it came out pretty tasty. • • • #whatsfordinner #chickenstirfry #dinner #radishes #jasminerice #cooking #momlife
Some days you’re on point with a high protein and fiber rich breakfast...some days you have a waffle and a chocolate muffin. • • • #balance #balancedbreakfast #momlife #toddler #toddlermom #toddlermom #kids #breakfast #breakfastofchampions
When you’re the life of the party, and you’re only 3... • • • #toddler #toddlermom #momlife #alexisis16
It’s Melia’s 7th Birthday!! Cottage cheese treat for everyone. My baby is growing up! • • • #dog #dogs #melia #ameliaearhart #norfolkterrier #dogmom #happybirthday