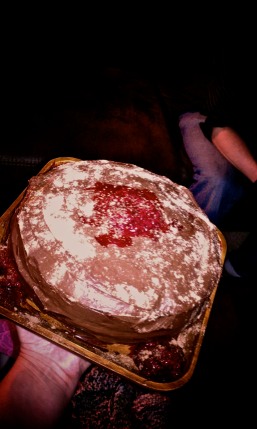 … or how about “the last PARTY FOR ANYTHING we will ever throw?”

My husband and I used to be real party-throwers. A lot of people came. We had a lot of food, drinks, and fun. There were often themes – like the Ugly Sweater Party we threw one year around Christmas time. There were ones for no reason at all but to get together. But in the last few years, things have tapered off a little. For one, we are more busy, just as our friends and family are much more busy. As you get into your late 20s, regular partying for the sake of partying just isn’t on the top of your priority list when you have jobs, bills, homes, relationships, kids – you get the point. The last real party we had prior to now was a housewarming at our old place, which resulted in me getting so drunk I got sick and waking up the next morning with our friend Ross hugging me in his sleep.

Finally, after quite an hiatus on throwing parties, my husband and I decided to throw an Oscar Party this year. Last year we planned one but I got sick in the end so it was canceled; and we have a lot of friends we wanted to see that we now live much closer to.

Mistake One: Forgetting what I just said about how busy everyone is.

So we decided to have this party and I suppose just expected everyone to suddenly not be as busy as they normally are. We are just as busy as them, but for some stupid reason we thought it would pan out. In the end, only three people came. After the party was over with, my husband and I were talking about some of the mind-boggling shit that went down and he said “hey, they’re your people.” Well, it’s true – they are my people. “But at least my people showed up” was my response. Really, though, you’ll see that I think that between his people never showing up, my people showing up and being absolute slobs, we’re just going to stop having parties.

Mistake Two: Posting about it on my Facebook page.

My personal Facebook page is set to private and I stupidly posted the event on my page completely forgetting that there are some people on there that I don’t actually know much about. One of them is a writer that is in a writers group I am in – the man and I have never exchanged more than a sentence: “looks like you found my goat” (in reference to my former cover picture). He does not follow my blog. He has never come to a meeting I have attended. And yet when I posted on my page about our party, he stated he and his wife would be coming.

Mistake Three: Stating that we would have food.

When the writer I had never met before and his wife showed up two and a half hours after our party began, they had not even gotten through introductions and walked in the fucking door and he said “you know what we could use: some food.”

They then proceeded to sit down and eat us out of house and home.

The wife picked up the bowl of green olives and ate the entire thing. There were two jars of olives poured in there when the party started, we each had a few, then she got a hold of them and two olives (TWO FUCKING OLIVES!) remained when they left.

They each ate – by my count – eight pieces of garlic bread and destroyed the fucking stuffed shells I had made.

I had also baked a cake. To be precise, it was a chocolate cake with two layers held together with a homemade chocolate raspberry cream sauce (pictured above). We were waiting to have cake until a little later in the evening, but as soon as this guy and his wife finished hogging down the rest of our food, he grabbed the cake knife and just dug right in. Licking his fingers and the raspberries off the side of the plate, I lost my appetite for anything, including having any parties for any reason ever again.

If I hadn’t posted that damn thing on Facebook, I know the guy never would have seen it. But I also think my big mistake really traces back to the fact that I’m Facebook friends with a writer I don’t really know. Writers are really assholes. Dickwads. Fuckfaces. Opportunists. A greater writer once said: “writers…they either love you because your writing is genuinely bad, or they hate you because your writing is genuinely good.” I know a lot of writers that I think are great friends, but sadly I have to remind myself of that every time the task of writing comes into play.

So after feeding time at the barnyard came to an end, and we were about halfway through the Oscars, the guy and his wife flipped the evening into being about promoting his book. They handed out bookmarks and compared it to Harry Potter. Harry-Fucking-Potter!! Then shortly after asking me for a little more information about the writers group I knew him through, they announced that they had to leave. There was still about another hour and a half of the Oscars – the reason for the party. I felt like thanking them for coming to his book dinner, since clearly this was a free meal to promote his book (in his mind). Unreal.

Mistake Five: Having faith in humanity

What has happened to this world where people are so goddamned opportunistic like this? I struggle every day to find meaning, purpose, and value in my own life. Is this what others do to achieve that? Do they show up and force themselves on others, take what they can, and then get the fuck out to move on to the next endeavor? Is this how people are striving to reach their goals? By turning everything into being about them and for them? For the remainder of the Oscars, my mind was completely boggled. My mind was already pretty boggled going in, but now! Now I appear to have lost all faith in humanity. We have become nothing but the opportunistic pigs Orwell foretold. What grates at my faith in humanity even more is that I know many of you do not even know what I just referred to.

What the fuck. I give up. And if you are my husband and actually reading this, we are no longer throwing parties.

Alexis is making friendship bracelets. Ava is standing on the bed. Carl is playing with power tools and eating watermelon. Your average evening. • • • #momlife #quarantinedays
The Easter bunny may be canceled, but we at least have Easter dinosaurs at our disposal. • • • #easter #spring #dinosaurs #toddler #toddlerlife #momlife
😍
We don’t do Saint Patrick’s Day, and yet here we are. • • • #baking #cupcakes #saintpatricks #stpats #luckotheirish
Thank goodness we were stocked on the essentials. • • • #food #cheesetray #cheeseboard #coronavirus #quarantine
Raise your hand if your kid wants you to watch their sport, but also prefers to play from the furthest distance from you. 🤷🏻‍♀️🙋🏻‍♀️😂 • • • #ava #fromadistance #tennis #teamtennis #jtt #usta #scta #tennismom #momlife #kids #fromadistance #leftie
And then we came home and dyed our hair. • • • #tennis #tennismom #kids #winner #tennislife #momlife #momofthree #scta
I have a 16 year old with endometriosis and migraine headaches. She’s also in high school and trying to set herself up for a successful future. I have a 12 year old readying herself for high school, and also going through puberty. And I have a three year who is, well, three. If you are coming to me for anything but to love and support me, go away. I deserve just as much as anyone else. • • • #dontatme #momlife #momofthree #kids #teenager #tween #toddler #toddlermom #roughpatch #support #hugamomtoday #kids #parenting #stayathomemom #sahm
I’ve been looking for a backpack for Carl for about six months, now. Everything was either way too big for a three year old, way too small to hold his things, or ugly. Finally I found this today at Carter’s, and it was cheap. Now I don’t have to worry about losing his crayons or books anymore when we go to the library. • • • #babysfirstbackpack #homeschool #preschool #3yearpreschool #toddler #toddlerlife #schoolsupplies #momlife #homeschoolmom #toddlermom
No bed quite as comfy as Mom. • • • #momlife #toddler #toddlermom
*cuddle* • • • #momlife #tween #ava
I had to turn in some stuff at school today, and on the way home we decided to go to Barnes and Noble. In the cafe they had Elmo cookies. SO ADORABLE. • • • #toddler #toddlerlife #momlife #toddlermom #momofthree #elmo #elmocookie