This evening at dinner …

… I had a little wine. Not saying I don’t often have a little bit of wine, but just prefacing the story with that so you all know why I would be so inclined to do what I am about to tell you that I did.

So we had a pretty long day. Got up. Showered. Dressed. Made lunch (because we sleep pretty late). I made turkey burgers and macaroni and cheese with a fruit salad. It was a big lunch, I know, but we were planning on going out for soup later, so it was really our main meal. Then we drove an hour to visit my grandparents. Stayed with them for three hours. Ran a few errands then out to dinner. While at dinner, I had a little wine.

Had I not had that wine, I may not have had the urge or guts to do what I did while there.

It was a typical dinner. I ended up ordering a salad and some bread. We didn’t have much to talk about after spending the whole day together. The place was crowded – expected for a Saturday night, but nothing out of the ordinary. Then as dinner was winding down, though, a very large man and his mother and grandmother were being seated at the table directly across from our booth. 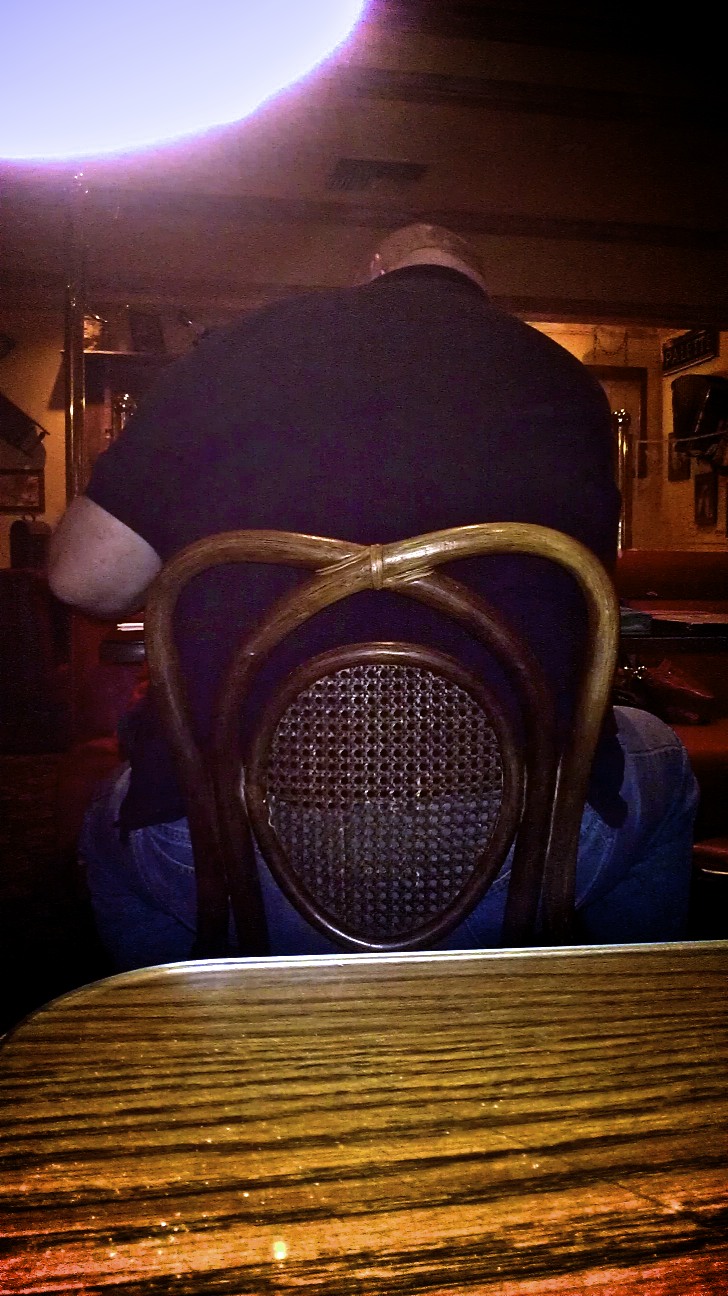 When I say large, I mean a combination of tall, largely built, big-boned, and obese. He was bald. He was very very loud. He smelled like he had been rubbing himself with those pine tree-shaped car air fresheners. For some reason he was having a hard time getting his mother and grandmother seated. It was one of those half-booths, half-table deals and they were arguing over who was going to sit where, and whether or not grandma was even going to like the slop being served at the restaurant this evening.

All the while, this guy was boisterously shouting about getting the old ladies seated, he was backing his rather large derriere closer and closer to our table. Closer and closer he inched until I thought his rather large ass-filled jeans were going to knock into my salad plate or rub themselves up against my wine glass. So I did what every girl under the influence of wine, and clearly in need of antipsychotics, would do: I stuck my hand out.

By stuck my hand out, I mean I extended my arm to rest along the very edge of the table. My palm was faced downwards at first, but then I thought it would be really funny if I grabbed the guy’s ass. I know, psychotic. I have no idea why I thought it would be funny, but he kept leaning over and getting so close to my food anyway, I figured why not. Sadly, as I began to slowly turn my hand over so as to cup it just right before thrusting it up to get in a good squeeze, the guy sat down.

Saddened by my failure to grope a complete stranger, I finished my wine and we left.

Now at home, hours later, I am wondering just why the guy was being so loud. Why was he backing himself into my food as well? It was as if they had no understanding that it was a crowded restaurant during the busiest of times. Had I been given just five more seconds, I could have taught him a lesson. The lesson that in a restaurant you are in public, and you need to be courteous of the public and other people’s personal space. The lesson that you shouldn’t be rubbing your large, jean-covered ass all over people’s salad plates and wine glasses. The lesson that if you get too close, you might just get a squeeze in the buttocks – a squeeze that to some may be considered enjoyable, but I’m sure to most (and that man) would be horrifying.

So that was my Saturday night. I’m going to go have some more wine and then check in to the mental ward.

21 Replies to “This evening at dinner …”