So who’s going to sign up for the “drag Heather back to California kicking and screaming” team? Because the way things are going, I don’t feel like it’s going to be easy to come home from our vacation, which begins in T-minus two days. The only saving grace is that my husband and all my things are here. Otherwise I would be so disillusioned with California culture at this point that you’d have to put me in a  straight jacket and mouthguard to force me back.

Today I went to a kid’s party. Seems normal, although I went on my own for once since we have been getting over a cold and the last thing I want is for everyone to get worse just before we leave for my sweet, home:  Chicago. It was the third birthday party of the daughter of one of my long-time California friends. She and I have known each other since I worked on her mother’s campaign for United States Congress – I was at her wedding, at the hospital three years ago when her daughter was born, and managed to keep in contact with her even though we haven’t seen much of each other in the past few years. Since we moved out of Los Angeles and back into the ‘burbs recently, though, it seemed only natural I would go to her daughter’s party.

Let me start this by saying, though, that I don’t like some of their friends. She and her husband are awesome, their families are equally as wonderful of people; but some of their friends leave me scratching my head. I’m sure by the end of these “things I said” and their companion “things I should have said,” you will be scratching yours too. Or drinking heavily, which is what I did when I got home.

When I walked up, they had one of those Jolly Jumper things set up in the front and kids were jumping and screaming in it with a few adults standing outside of it. I recognized all of them immediately – some of whom were these friends. One of the women I will never forget because (1) she squirted breast milk on me accidentally one time during a UFC party while she breastfed her infant; and, (2) they recently moved down the block from my father and I see them while driving all the time. I kindly said “hello” and she didn’t recognize me. Then she sort of did, then she didn’t, then it got awkward and she said “you must be who I am thinking of, but your hair is different.” I smiled and said “yes.”

I tried to walk into the actual house to see my friend, drop off the gift, and converse with the sane family members I knew would be there. As I made my way in, though, someone else saw me and this time I was recognized. The woman was sitting down breastfeeding at the time and flagged me over; when I walked over she talked a little and then said “don’t you look cute today! A little overdressed for a kid’s party, but to each his own!” I was wearing a short black spring dress, a white and black striped shirt underneath, a sweater, a pair of leggings, and my black Uggs. I’m pretty sure I wasn’t overdressed – I wear this outfit at least once every few weeks. Nonetheless, I defended myself with an “oh, you know … I never have an excuse to get out of yoga pants most of the time, so I thought I’d at least look nice!”

Things I should have said: “Oh, you think I’m overdressed? That’s funny because even though it’s a kid’s party, I’m fairly certain cheap Kmart sweat pants and an oversized t-shirt is inappropriate. You should probably go change, now.”

Things I said (or rather did):

I walked in the door, but was again accosted, this time by a man. He and I had a great conversation a few years ago at a birthday party. He was engaged to this girl my age that dressed something like my mother. She was there today, wearing a knitted vest with a snowman on it. Anyway, so he and I had a great conversation at a birthday party a while ago. I was dressed down, looking sort of crappy, and just talking to him about philosophy because he asked what I did and I was in school at the time. Apparently afterwards, the squirting cow from earlier started a huge rumor about how “Heather the whore” was always flirting with all of their men. Some big rumor drama started and the guy’s fiancé was just horrified by the whole ordeal. I learned this shortly afterwards because we were at another party and the guy and his sweater vest-wearing-woman didn’t even come, which I guess was because she was afraid he’d flirt with me “back.”

So they were there today and the guy said “hello” and started talking to me. In the three years since I’ve last seen him, he’s aged about thirty. His fiancé is now his wife and while I spoke with him, she walked by staring. She just paced back and forth, glaring; and a minute later when I said “hello” to her as well, she turned around and walked off. Politely, I concluded the conversation and said it was nice to see him, and went about my way.

Things I should have said (or should have done): After the second or third time that bitch paced back and forth, glaring at me, I should have shouted “I’ve been wanting to do this for years!!” and then planted one on him, not forgetting to grab his balls briefly at the end.

Finally, I made it in. I was greeted briefly by my friend and her husband. I spoke with her mother, his father, and got some food. I didn’t want to eat much so had a chicken leg and some crackers. While getting myself a Diet Coke from their drink stash, someone else came up to me. This woman really roasts my ass. At my friend’s wedding, her husband referred to my father as “the help” and yelled at him – that’s the kind of person we’re talking about, here. Anyway, so she is something like 60, acts 150, and she walked up to me, grabbed my unequivocally not-baby-filled-gut and started screaming “ooooooooooohhhhhhhhh, you’re preeeeeegggggnanttttttttt!!!!!!!” Now I can admit that I could shed a few pounds here and there, but I most certainly did not look pregnant. I laughed, said “no… I’m not pregnant … so how are you doing?” Then excused myself quietly as people still stared, about five minutes later.

Shortly after, I left the party. Said my goodbyes, hugs and such. Then I went to my car with my head held high, only to feel completely demoralized by the time I got home. Wine and cheese made everything better, as well as the reminder that in just a couple days now I will be on my way home for the first time in over a decade. California will be lucky if I return. 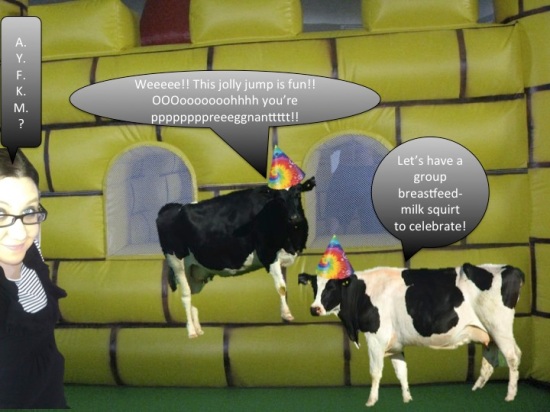