Of course by “back to reality” I mean that I am a rampant bitch again. Like I said in my blogged vacation reports, I felt super nice again when I went to my sweet, home Chicago for a close-to-three-week vacation. It was wonderful. I saw friends. I visited with family. I ate and ate and ate some more (although I lost three pounds on the trip…). And more than anything, I felt good and happy – two things I do not often feel in my daily, misanthropic California life.

I realize now that I attach a lot of my unhappiness to my physical location, and this is mainly because my unhappiness in California stems from things about the area that I just don’t jive with. I’m not fake, high strung, and narcissistic – qualities that I find to be more than I can take at times in my southwestern coastal community. This isn’t to say there are no nice people here (because there are), it’s just a little overwhelming for this tried and true Midwest Girl to be confronted with such a different life perspective that can seem (at times) to be a little shallow and short-sighted. 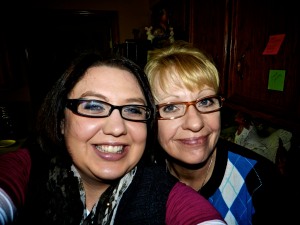 It also has to do with a lot of other factors. Like the fact that I am a philosopher and there is little intellectualism going on in our community. Leaving graduate school was in that sense probably the worst thing I could have done, for I lost the only community of thinkers in the program that I left behind. And the fact that I am allergic to a lot of California pollens, so am miserable at least three days a week with a stuffy nose and sinus migraines. Lastly, there is that simple fact that my family is so far away from the west coast. I miss them every day and no matter how many things we try to fill my life with to replace them, it just doesn’t change a thing.

So my vacation home was really a vacation to my roots – my own roots, that is. It has been years since I have been able to look at my life and say what I really feel; years since I have been able to acknowledge what is really going on, rather than distracting myself to make peace with an unhealthy situation. Now that I have a little more clarity, I can move to make some positive changes in my own life. Don’t you worry, though, faithful blog followers – I will still be just as misanthropic and bitchy as always. I just won’t have high blood pressure, anxiety, and insomnia to go along with it.

So here are a few of my changes that I am immediately implementing as I get back to reality:

I will no longer be Internet buddies with dysfunctional fuckfaces

That’s right – I dropped the f-faces word. What I’m saying is that I will no longer be Facebook friends, Twitter followers, or LinkedIN connections with people that are assholes. To begin, I’ve deleted all of the people that are in my husband’s circle that have been outright dicks to me. That doesn’t mean that if he wants to go to a family reunion (please, God … NO!) I won’t go – it just means I won’t be letting them into my own personal life when all they do is use that to hurt me. Too many of his friends and/or family have told me I’m “ugly” (yes, one of his friends told me that) or that there was an entire cadre of other things about me they did not like for me to feel OK with having extended relationships with them.

Sadly, this means that Facebook fights with Hello Kitty Toaster will be coming to an end. There is still the possibility I will be running into her and my prick of a brother-in-law in public, but I just cannot allow her to impact me in my personal life anymore. On the day we were leaving Chicago to embark on our cross-country return, she sent me a bitchy Facebook comment and then posted some bullshit on her own Facebook a minute later about how much people like me piss her off. Well good, Hello Kitty Toaster – you piss me off too, so how’s about we stop being Friends?

I will be doing things I enjoy from now on…

…rather than doing things that others tell me I should be enjoying. I am who I am. I like to talk. I like to watch movies. I like to go to museums. I enjoy shopping. I feel empty when not in the city. I like going for drives for no reason other than to look around. And like most Chicagoans, I like to bitch about everything under the sun. This is who I am and anyone that doesn’t like it can go jump.

While I was on vacation, I was so happy to have the opportunity to do some of the things I really enjoy. On one of the last nights in the city in particular, we took a drive into the heart of Chicago to flash some photographs and soak in the place that is so important to

who I am. The following day, I visited the Hemingway Museum and the home in which he was born (something that would bore most people I know, but fascinated me beyond belief). In these two things – my nighttime drive through the city and my visit to the museum of my favorite writer – I felt more happy and alive than in as long as I could remember.

I will no longer let others put me down when it comes to my personal character.

Obviously this California versus Chicago issue is a bone of major contention between my husband and myself. Without getting into all the uglier details of our marital discord, I can say without regret that my husband is adamantly opposed to living anywhere other than California, and doing anything other than cultivating his own career in film. Oftentimes, it feels as though I am demonized for wanting something other than the unhappiness we both have for the sake of some vague hope that one day his career will take off. Beyond that, and as is the case with most women, usually I am gaslighted for having feelings.

Because I am the way I am, I regularly feel subjected to a rejection of who I am simply because I am not like most people around me (at my home in California, that is). As an example, today I was driving home from the grocery store and there was a momma duck walking across the street with eight little baby ducks. The street was right outside of our apartment complex, and we live nowhere near any lakes so I have no idea where they came from. Sadly, California is so covered in concrete and developments, finding random wildlife struggling to find a home is common. There were three cars in front of me when I noticed the ducks crossing. The first driver honked, the second driver swerved, and the third driver started screaming at the ducks to get out of the road. This is typical behavior for the area.

Although I didn’t do any of those things. I pulled over when I saw that the baby ducks were having a problem getting onto the sidewalk. I got out of my car and I walked over to help lead them up the ramp portion of the sidewalk. Right as I got back in my car – which was legally parked, I might mention – a fourth car pulled up behind me and screamed out the window “you fucking asshole, you should have let those ducks get creamed.” Really, California? Yes, really.

I know that helping those ducks was the right thing to do. I know that a lot of things I do are the right things to do. I’m not trying to say I’m some moral standard by which others should judge their behavior, I’m just saying that I try to be a good person and I know that when I make choices in that vein I am doing the right thing.

Upon my return from vacation, though, it seems as though a concerted effort has been made by others to make me feel like I am bad or wrong for wanting to be who I am and live life in accordance with what I know is right. I’m not going to tolerate this anymore, though. I will no longer let others put me down when it comes to my personal character.

So I feel like something of an hypocrite. Around New Years I talked shit up and down people’s New Years Resolutions, and these three things feel like resolutions to me. Really they are changes, though – changes that I intend to keep that are matters of personal growth (rather than things I should have been doing all along anyway) and there will be more to come. I’m back to reality, and while that does mean that I am back to being a rampant bitch, it also means I am back to the reality of who I am.

28 Replies to “Vacation Wrap Up: Back to Reality”