I feel bad for my husband sometimes. Not only does he have a terribly dysfunctional job situation (works far from home, works too many hours, etc); and has the likes of Hello Kitty Toaster for a family situation, but he’s also married to me. I can be one of the most foul-mouthed, hard-to-tolerate women on the planet sometimes. I’m blunt. I’m crude. I was raised by a man, so every other sentence out of my mouth is “suck my balls.” And while I talk about balls and drop the f-bomb constantly, I’m horrified by things like leaving the toilet seat up, belching in my face, and hogging down our dinner like it’s feeding time at the barnyard. I’m a tough nut to crack at times.

My husband and I also have very little in common. I hate the film industry. He works in the film industry. He is an avid Laker fan. I love the Bulls and  punch things when I see Kobe come on TV. Another thing we don’t really have in common is a sense of humor. My husband has none and I am constantly making jokes about everything going on around us.

Today there were a few times when Nick was being good old, serious Nick, and I was just being my typical crude and poking fun at everything-self. I like to call them Conversations With Nick.

Conversations With Nick, Episode 1: Do I Look Pretty?

B(itch): “I don’t even know why I get dressed or put on makeup anymore.”

Nick: “Neither do I. You look the same no matter what.”

B(itch): “When was the last time you thought about complimenting me?”

B(itch): “One: one compliment every so many years is insufficient. Two: ‘you look bone-able’ is not a compliment.”

Conversations With Nick, Episode 2: Are You Putting Your Penis in My Donut? 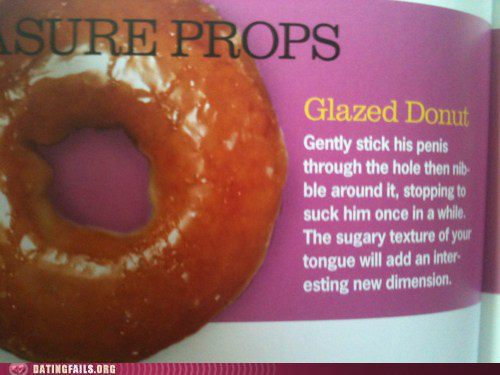 B(itch): “Hahah! That donut picture I showed you earlier made you want donuts and now everyone on Facebook thinks you’re going to stick your penis in it.”

B(itch): “What, do you want to stick your dick in a donut tomorrow morning? Was that your plan?”

Nick: “No that wasn’t my fucking plan, Jesus!”

Nick: “You do that. I’m going to bed. See you tomorrow for donuts that I will not be sticking my dick in.”

B(itch): [walking out of the bathroom] “I just realized we never got into that whole ‘pee with the door open’ thing people do.”

Nick: “I didn’t know people peed with the door open.”

Nick: “Are you saying you want me to pee with the door open?”

Nick: “So, just to be clear, do you want me to start leaving the door open when I pee?”

Conversations With Nick, Episode 4: Oh, you just want to schtick her with your donut dick. 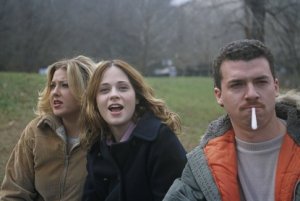 B(itch): “I think Zoey Deschanel has had some major plastic surgery.”

B(itch): “Look – in this movie [watching All the Real Girls] she looks totally different than she does now.”

Nick: “She looks the same.”

B(itch): “No way!! She doesn’t have that stupid fucking puckered lip bull shit that makes me want to rip her face off. And she clearly has had some kind of Botox shit put around the top of her face so she doesn’t look like such a meth addict.”

Nick: “I think you have issues with Zooey Deschanel, not whether or not she’s had plastic surgery.”

B(itch): “Oh, you just want to schtick her with your donut dick. I bet you’d tell her she looked nice more often than once every few years.”

Nick: “What in the hell are you talking about? I am not sticking my penis in that donut! I’m going to bed.”

B(itch): “You said that over an hour ago. You can’t resist my foulness.”

I know … I know what you all are thinking: poor Nick. It’s hard to be married to a foul-mouthed skank such as myself.

14 Replies to “Conversations With Nick”