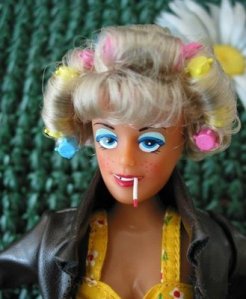 So when my Trailer Trash Mom showed up the other day for the impromptu garage sale and lemonade stand (you know, the one where she used a Poise Pantyshields box to display her coffee mugs for sale), she got wind of the fact that my father was out of town until tomorrow and that we were housesitting for him. Somehow she weaseled her way into staying a night, which turned into two; then today she has shown up again to spend the night.

The complexity of this situation is trifold:

(1) My parents have been divorced for over 20 years; my mother is remarried. But as she was being “courted” by her hillbilly husband, she stayed in my old bedroom at my dad’s house because – quite frankly – she had nowhere else to live. My father is a very nice person. A very very nice person, who believes so much in Catholic charities that he lets himself get raked over the coals time and again to try and be a good person.

(2) With that last point in mind, it is obvious what my mother did to my dad’s home while she stayed here (for really only about eight months). She destroyed three of his sets of blinds. She broke his microwave. She destroyed his dryer to such a point that it was irreparable. She broke cabinets, closet doors, and a window screen. And somehow she created a large, gaping hole in the wall of my old bedroom. Countless things have gone missing from his home as well – obvious where they went coming from the woman who just showed us her copy of “Guide to Receiving Free Gifts …”. My father now believes that this is some sort of a vendetta she is trying to exact against him. After the last few days, I don’t know. She may just be this deeply embedded in her new position in life.

(3) My mother is called my Trailer Trash Mom for a reason: she’s a fucking hillbilly. She wasn’t always an hillbilly, though; in fact, my father says that now she is like a completely different person than she was when they were married. As does her family. As do her friends. Regardless, after the last few days of her glomming onto this free ride as much as she could, I have realized more than ever that my mom is now, at her core, a pigslob, trailer park queen. And in the fine words of Benjamin Franklin, “…fish and house guests smell after three days.”

#1 The Destruction of My $75 Sur La Table Kitchen Strainer

I’ve had a pretty crappy weekend, which began with that awful theft of my things at the mall. I’m used to it though – crappy times for me seem to be the norm, at least since I moved to this fine Golden State of ours. But the icing of crapdome really takes the cake when my Trailer Trash Mom is involved.

Last night my husband went to hit up the bathroom to brush his teeth and then go to bed. He was in there for a mere thirty seconds, though, when he came out with my $75 Sur La Table kitchen strainer in hand, filled with bath toys. My dad doesn’t cook much, so of course I brought some of my own materials – included in there was my kitchen strainer. I suppose it’s my fault for not having the forethought to realize someone might mistake my strainer – clearly used for cooking – as a tool for drying children’s bath toys. 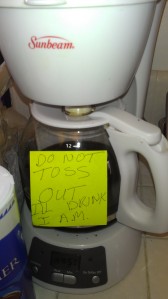 So my dad has a cleaning lady that comes once a month to clean his home, and she is scheduled to come tomorrow. When our cleaning lady comes (actually the same woman), I usually pick up around the house the day before and make sure things are in good order so she doesn’t have to spend any time picking up clutter. My mother, being the pigslob trailer park queen that she is, leaves clutter fucking everywhere in her path. When she left today, she had left behind her a trail of things that needed to be picked up – a feat that took me about four hours to take care of this afternoon. She was gone for most of the day, and to be quite honest I thought (hoped) she was not going to be coming back. But then she did, around 5 o’clock, and the first thing she did was get mad because I had dumped out her coffee.

Well, first of all, her coffee was a huge fucking mess. It was in the way, and that sign had been sitting there for two days (notice the illiteracy of it too…). I had a hard time believing that she was still going to drink coffee that had been sitting there for over two fucking days. Sue me for thinking she had taste buds or dignity or common sense. In any event, she got upset because I dumped her coffee, and the whole time I was reminded of the time I was ten and she screamed at me for throwing out some saltines I had dropped in the dirt. 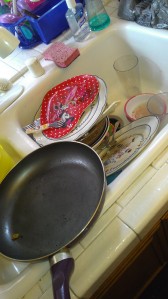 The thing that really pissed me off today was that my mom promised she was going to make buttermilk pancakes and, while she did, she only made me two miniature ones (smaller than silver dollar pancakes); and she left behind a huge mess in the kitchen. I don’t just mean a few dirty dishes faithful blog followers, I mean that bitch splattered batter and egg everywhere and didn’t clean it up.

This morning she got up around 7:15 and proceeded to do what she does most of the day – talk loudly on the phone to her hillbilly husband. She woke everyone up with her loudness and then talked and talked and talked until she realized it was almost 9:00 and she had to leave to take my grandma to the doctor. She had just enough time to throw together some pancakes for apparently everyone but me, make a huge mess, and then run out the door.

More annoying than this is what she has done since she got back, which is talk on the phone more only now it is to give her husband updates on the hockey game. Apparently he hasn’t paid the cable bill and the TV was turned off so he can’t watch the game, so my mom is watching it and calling him every few minutes (being the big fucking sports fan that she is) to scream and yell in the phone about what’s going on. I didn’t really care about hockey before; I think I might actually hate it now.

There are some other glaringly disturbing things that I haven’t mentioned here, like the fact that to my knowledge my mother has not showered in three days. I also am of the belief that she has a large number of creditors after her because she keeps getting calls she either says she “doesn’t want to take” or she accidentally answers and once she says “yes, this is she” and listens for a second, she hangs up. It wouldn’t be the first time for that. I am almost starting to pity my Trailer Trash Mom because it’s clear that she really has become, well like I said – a pigslob, trailer park queen. She’s heading back to New Mexico and her trailer and the hillbilly husband in just three, short days. It’s bittersweet, really. I’m so glad she’ll be gone, but what the hell am I going to have to write about?