Yes, I am going there faithful blog followers. If you are a man easily turned off by all things feminine, get over it – this isn’t about stuff like uteruses and tampon tips. And this most certainly is not a series of gripes about being a woman.

A few days ago I was perusing the Internet and somehow happened upon a site called The Menstrual Hut. It wasn’t a joke or  an Health and Wellness site either. No, no – it was a website where some women gave homage to their periods by posting photographs of their used tampons and maxi pads. Usually all you hear about are women complaining about their periods, though. Menstruation does seem pretty inefficient (for the most part at least); and it is a pain (literally and figuratively).

But despite the cramps and the headaches, and the occasional zits popping up in odd places, I love it. Not so much that I would post photographs of my used maxi pads anywhere; but definitely enough to make a list of reasons why I do.

The minute my period begins, my body sheds water weight like gang busters. From then until the time I ovulate (roughly two weeks later), I am in the skinny jeans zone. Some of the nicest compliments I have gotten about the way I look have been when I am on the ol’ rag.

Reason #2: An Excuse for being a Crazy B(itch)

I mean, I’m certifiably crazy most (read: all) days of the year, but on the 3 – 5 days that Aunt Flo is in town, I have an excuse. I also silently excuse others in assumption that they, too, are on the rag. “Oh, my friend just told me I’m an asshole … she must just be on her period – I’ll forgive her” or “oh, that other mother just gave me the stink eye before she started screaming at my kid … we’re going to just assume she’s feeling a little hormonal today and move along.” While I like to confront the world head on, sometimes it is a little less stressful to pick your battles and excuse the bitchiness.

You faithful blog followers all know that men go through a monthly hormonal change just like women do, right? And just like women closely confined bleed at the same time, men and women closely confined have monthly hormonal fluctuations along the same pattern as well. I know my husband is on his rag when he starts breaking out like a 15 year old, throwing little temper tantrums like a queen, and eating entire bricks of cheese in one sitting. Personally, I find it entertaining. 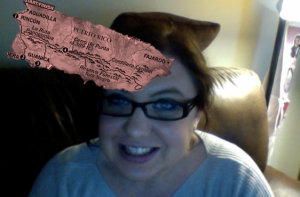 I just read a great article in Psychology Today about a female scientist that disappeared in the 90s after publishing some controversial papers, one of which was about menstruation being a good thing and birth control inhibiting the body ridding itself of toxins. I thought to myself – well duh, this is why I don’t take birth control, and it’s just another reason why I love my red flag.

So when the zit the size of Puerto Rico planted itself on my face this morning, I knew this was just junk getting flushed out of my system. Yay for Period Pimples!

Reason #5: A Biological Trick on my Husband

Every month when it gets close to period time, my husband starts fishing around to find out when I’ve gotten it. I don’t take birth control pills, so when I am stressed out or sick my period comes early or late. This month I got sick with food poisoning and then I was super stressed out with everything my Trailer Trash Mom was putting me through, so Aunt Flo’s flight came in a whopping week and a half late. For the last week or so, my husband has asked over and over if I’m pregnant, only on the sly:

Nick means: “Is there a baby growing inside you?”

Nick says: “How are your cramps doing this evening?”

Nick means: “Are you still pregnant? Because in my mind you are and the world is going to end because of it.”

The funniest part about this is that it appears that Poor Nick thinks his sperm can be implanted in my uterus simply by looking at me contemptuously from across the dinner table. You may be magical, darling; but not that magical.

See, now – was that so bad? Five reasons why I love my period; and there are plenty more why I’m sure you secretly love yours.

27 Replies to “My Menstrual Hut”