I’ve got a lot to say today, b(itch)es; and I’ve had a lot of tacos and a lot to drink. Let’s get to it before a barf and/or pass out.

While on my vacation home to my sweet, home Chicago in March, I had lunch on my last day there with my childhood friend Taryn. One of the first things she said to me was that she admired how much I put myself out there on my blog. I remember thinking to myself “WOW!” because I thought everyone thought I was some big asshole for being so open, honest, and (quite frankly) real. And it’s true, I don’t believe in lying or hiding or any of that nonsense that people seem to do all the time. I have no problem sharing with the world who I am because I am comfortable with it. And while I share things about my life that others might not, it’s still the truth and that – I believe – is our utmost responsibility as human beings: to always be honest. 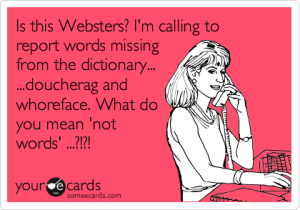 In the years that I have been blogging, I feel like I have done a lot. I’ve posted over 230 posts, the majority of them on humorous observations or satirical social commentaries. I put together a compilation of my “best blogs” from the last year and published it to eBook. I was Freshly Pressed even – a feat I never thought would happen because I’m crude and crass and make up my own swear words that are so offensive sometimes even I cringe when I read them. And I have over 500 faithful blog followers – followers who contact me frequently and say they love what I write. To be clear, I fucking love what they write too. In fact, I can’t wait for my actual book-book to be up and running on eBook because I look forward to the comments and suggestions from you wonderful and terribly talented writers/readers.

I’ve also made a lot of enemies, it would seem. I’ve made an unprecedented number of people mad with my comments about parents that do not vaccinate their kids. One guy emailed me sometime last year and said that he believes me to clearly be a “whore.” And I’ve apparently angered some of my husband’s family and friends for being so honest in my observations and experiences with them as well. Regularly I hear about how so-and-so didn’t like it when I said that my husband did nothing for my birthday, or when I am honest about the fact that he lies to me a lot. Interestingly enough, my husband reads every one of my blogs. Every night he comes home and we talk about them. We talk about it when I say our marriage is a “shit hole” or when I blog about how he lied to me yet again. What’s great about it is that he knows like I know – we are both human. We aren’t perfect, we don’t have delusions about that. It is what it is and that we can talk about it is a lot more than people who hide behind false smiles and “oh, it’ll be fine as long as we have love” and other such bull shit.

But I’ve become increasingly wary of some of the trolling that goes on around my blogsite too. My mother in law is a blog follower, which was very sweet of her; although now it appears that some of the hostility my father in law expresses over his messages might be fueled by some of what I say in my blogs. And today, one of our friends was having a comment thread-conversation on her Facebook about their new system of grocery shopping and cooking, and I commented very nicely commending them for their great compromise and system; and how lucky she is to have a husband who cooks because mine – like most women – never really does anymore. Her husband (my husband’s “friend”) replied quite angrily, though: 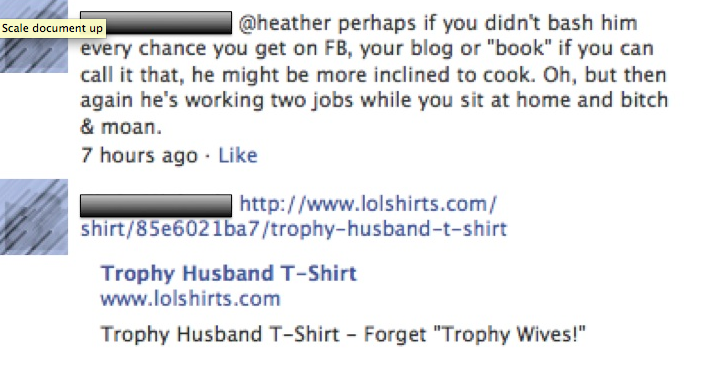 …my husband was horrified that someone he thought was his friend would say such a thing. He actually suggested what I did, which is that the guy is off his rocker and nothing but a bully and a troll. And terribly misinformed – we don’t even know where he got some of this, since my husband works one job and sitting on my ass couldn’t be any further than what I do. We have not even spoken with Señor Douchecanoe in years (he isn’t even connected to either of us via Facebook, blog, etc. anymore; we only remain connected to his wife) … so it goes without saying that he was a little out of line.

This incident made me realize, though, that some of my posts have got to go private. I have no problem sharing any of them with my blog family, my friends, or anyone really that requests to read them. Not all my posts will go private; just ones that hit a little too close to home for those with minimal intellectual capacity and ability to understand that not everyone operates the same way they do.

If you are a faithful blog follower, and would like the passcode to the privated posts, email this b(itch) at hchristenas@gmail.com or just request one when you happen to hit on a post that is marked as “private.” I promise I will share; unless of course your name is Hello Kitty Toaster or Señor Douchecanoe.

So I almost engaged in an Hit and Run today with an Old Man. We were pulling out of the parking lot at the bank and my phone rang. It was the sheriff’s department, so I thought it appropriate to answer. I was also driving around in a parking lot, really – going from one to another – so I thought it would be OK to do. (PS the sheriff’s department was calling to let me know that the attempted break-in at our apartment this morning – one in a series of attempts at our complex – was not ’emergency’ enough for them to write a report or care.)

So I was pulling from the bank lot into the pizza place lot and this old man about the age of one hundred and ninety four walked in front of my car, leaned on the front hood and started yelling at me to get off the phone.

(1) That guy is not the phone police. Regardless of whether anyone believes it is right or wrong to talk on the phone while driving, it’s my fucking business and I did not hurt a soul. Normally I don’t drive on the phone – but this was in regards to an emergency situation (well, to me … not to the sheriffs); and I was in a fucking empty parking lot.

(2) By contrast, I see people driving around like jack asses on their phones all the time. Again, their and the police department’s business.

(3) Old fucking wrinkle ass leaning on my hood and refusing to move while he screamed at me, quite frankly scared the shit out of me. The guy was nuts! And Pookie started crying hysterically because he scared her too.

(4) I told the sheriff what was going on and he said “… back up and run the guy down … no wait, that was a joke I shouldn’t have made. Are you okay ma’am – do we need to come help?” By then the old wrinkle man had left, us traumatized although forgiving of the cop for not coming to take a report for the attempted break in of our apartment, given his sardonic sense of humor.

So then we parked our car by the pizza place to have lunch and there happens to be another bank (not mine) in the same lot. We got out of the car, a little shaky from the confrontation with the hundred and ninety four year old man, and all of a sudden a woman came running and literally screaming out of the bank.

Crazy hoe bag: “This is for bank customers only.”

B(itch): “This is right in front of the restaurant door. The only thing closer is the handicapped spot.”

Crazy hoe bag: “No … this is for bank customers only.”

Pizza joint employee intervening on my behalf: “We OWN this entire lot … you can park wherever you want ma’am.”

Someone, anyone … please elucidate for me just what the hell happened today. It was like a day of wackos … Wacky Wednesday, I’d say. Everyone was out to police others, cut each other down to size, and assert their control over the world – even in the stupidest and most illogical ways. Never a dull moment, faithful blog followers. Never a dull moment.