… or, perhaps more accurately described: Day 3 of “My Kid Is Better Than Yours Hell.”

Last year we made an attempt to go to every one of the Wednesdays at the Library free kids events, offered at our local library. Quickly, though, I learned that such events are home of SOAPs (Summertime OverAchieving Parents), self-entitled Californians, and just basically a sea of the ugliest humanity has to offer.

We stopped going to them last summer after there was an altercation between my father and a psychotic lady in a pink hat. It went something like this: my father was walking into the library to meet us, where we were standing in line to get into the community room where a kid’s show was about to start. He is a candidate for full hip replacement and moves a little slow; all of a sudden a little bastard about two years old ran into him and he almost fell over. My dad looked down and said “watch where you are going” and apparently (I did not know this until recently) the librarian told the kid to stop running. As a side note, it is not okay for children to run in a public library; and had my father fallen he would have broken his hip and had a world of problems just because his parents apparently didn’t care to teach their kid basic manners.

A little later, we were standing in line, and all of a sudden this psychotic lady in a pink hat came over and started screaming – literally screaming – at my father for getting into her kid’s way and for telling him to watch where he was going. He hadn’t yelled; he hadn’t even spoken harshly. He was just minding his own business, walking into the public library; and followed up almost being knocked over with a “watch where you are going.” Apparently this was an annoyance to this lady, though, because she kept screaming louder and louder until finally she stopped when someone said to get a librarian to ask her to leave; and then we all went into the show. Afterwards, her little bastard, fucktard of a child was pulling antique books off the shelves in the lobby of the library and screaming so loudly that she and her friends were asked to leave by the library staff. After that, we didn’t attend anymore of the Wednesday Summertime events.

Today was the balloon show. We went to the one last year and it was really good and so after much begging and pleading, I caved (assuming that nothing would be going on). The event was already overwhelming as is. They let more than the maximum capacity into the room; kids were screaming and talking and running around; and the show, itself, was a little bizarre (to say the least). Nonetheless, everyone was having a good time until this little kid stood up in the middle of the seated children and started screaming.

“Austin sit down!” I heard a lady yell from behind me and I looked over, and to my dismay the lady with a pink hat was standing right there. She was not in a pink hat again, but I could never forget this woman’s ugly-ass mug.

Austin did not sit down, so – in the middle of the show – she flopped herself to the front of the room and trampled over a bunch of small children to lean in and pull her little asshole out of the area. Just then, a man whose children she had trampled over, said quietly “ma’am, please don’t trample over our kids just to get your son under control.”

With fire in her eyes and a vein popping out of her head, this psychotic bitch plopped Austin down behind us, and trampled back over to the front where the man was standing on the outskirts. On her way, she kicked me in the kidney (I was seated on the floor).

“Don’t trample my kid!” he said and then the librarian came over and told them both to cut it out. 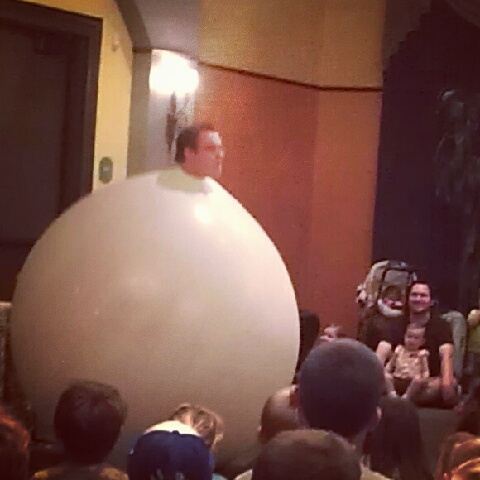 Crazy pink hat lady grabbed Austin and sat down in the nearest chair (which was right next to me, where I was seated on the floor), so we got up and moved to the back of the room. She sat there for a few moments, with a crazy look in her eye, and then all of a sudden she had her hands in a meditation pose and was muttering to herself. At this point, the balloon show had reached an all-time bizarre point, where one of the people in it had fully submersed himself into a large balloon. This was – by far – the craziest thing I had ever witnessed, between Psycho Susan and her little bastard in need of ADHD meds and the guy bouncing up and down inside a balloon.

Then, as if things couldn’t get any worse, the man who had asked the woman not to trample the kids went to leave and crazy pink hat lady – with a crazy look in her eyes – followed him out into the lobby and proceeded to scream at him to try and pick a fight, leaving her kid inside the show, completely unaware of how much of a psychotic bitch his mother is. At the height of the screaming, I heard her yell “how dare you say these things about my son!!” and he simply screamed back “it’s not about him, it’s about you – you psychotic cunt!” He was asked to leave and she returned just as the show ended to gather poor Austin. We shuttled out of the place immediately.

It doesn’t get much more bizarre than this, faithful blog followers. We are only three days into “My Kid Is Better Than Yours Hell” with eleven more to go. It seems like the people in my community are all looking for a fight. To be honest, though, I’m just glad it didn’t have anything to do with us this time.

Why is everyone so angry?