I don’t mean things cool as fuck parents, such as myself (BAHAHA!) do. Like drink. And say words like “fuck.” Be honest about shit and write blogs about our terribly mundane lives. I mean things pretentious parents do. I like to call them the ass-wipers.

The ass-wipers are the parents that baby their children well into adulthood. That wipe asses way past potty training. They are the helicopter parents and the parents that blame all of their children’s shortcomings on other people. They are the SOAPs (Summertime Overachieving Parents), as well as the all-times-of-the-year OAPs. They are the people that tell other parents what to do; that are bitching about Octomom stripping; that look down on others with passive aggressive statements like “oh … we don’t [insert activity] …”

As the weeks of overindulgence in summertime community activities continues, I can see now that they all do some very core things the same. All of them; every one of them does at least the following six things:

Before I started homeschooling a few years ago, we had started off with parochial school. For those not familiar, that means run by Catholics, prayers between lessons, and shit. It’s the bridge between 50 kids crammed into one public classroom and uber-private $18K a year school.

The school had each teacher send home a monthly newsletter, on which the pretentious parents had a “corner” to talk about stuff, share information, etc. As one of two room moms, I had no interest in spending time on this so asked the other room mom (the Queen of the Pretentious Parents) to do it. Every month she gathered information from other parents and shared it there; and every damn month after the next, included was a recipe for chicken and rice. Sometimes it seemed like this was all the people could talk about – their damn variations on chicken and rice.

Respond To Everything With “Do You Love It?”

“So how was your weekend?”

“Oh, it was okay … Dill came home from work early Friday so we had a little extra time together.”

“I did. We went on a date night to this new fusion place – I had a cranberry martini.”

“Parker went camping with his brothers so it was just me and the kids. We ran errands, went to a movie.”

“Oh the new Ice Age. It’s a little wild for the kids but I figured ‘what the hey!'”

“And then we ran some errands and I got those new U Kotex tampons.”

I’m not even shitting you – every other phrase out of their mouths faithful blog followers.

Now I’ve been known to carry those disposable wipey things with me. They come in handy when I don’t want to look like we haven’t bathed in weeks. But pretentious parents earn their subtitle of “ass-wipers” for a reason, that being they are constantly wiping, anything and everything.

The fundamental reason why people get sick so much now is because of these people. They are constantly over washing, over sanitizing, and over-wiping everything down, removing not only the bad germs but the good germs. Ironically, these are the people that think breastfeeding in a public pool is acceptable – where milk and all of the bacteria, viruses, and fungi within it can mix with the water to contaminate other people.

My point is that the pretentious parents are not only over wiping, but in doing so overprotecting. They are the helicopter parents whose kids can’t wipe their asses themselves – both literally and figuratively.

Bring Their Digital Cameras With the Huge Zoom Lens and Snap 10,000 Photos

I’m not one to bag on people for having hobbies, or for taking pictures of their kids. But when I’m trying to take a few shots with my little HTC EVO, or God forbid my Nikon, it gets pretty damn annoying when these pretentious parents are knocking over everything and stepping in front of everyone to get their large zoom lens in the right angle (messing up everyone else’s shots) so as to create 10,000 copies of the most precious image of their little gem.

Of course if they didn’t, then they wouldn’t be able to enter their kid in those Cute Baby Gap contests and then ask you to vote every day for a month and a half for their kid, right? That’s besides the point, though.

Pretentious parents are always the ones who seem to have thought that because they could buy a digital camera they both (a) are now professional photographers, and (b) can and should turn everything into a photo shoot. This makes it difficult for cool as fuck, relatively mediocre, parents such as myself, though – because not only does it make my kid think I’m a dick that doesn’t care, but also gets in the way of being able to make my own memories.

Call the Poor Doctor For Every Single Sneeze and Scratch

Recently, Little Pookie fell and scratched her leg. It was a typical scratch. It wasn’t deep; I cleaned it and put Neosporin on it. End of story. Then on the way into her science camp, she was talking about the scratch and another pretentious parent said “did the doctor make it all better?” She responded “my mom did!” And the woman, looking horrified, said “you didn’t take her to the doctor?!?!?”

This is an extreme example, but I can’t tell you how many times I have seen friends that rush their kid to the doctor for every single sneeze, cough, or runny nose. And the antibiotic over usage is astounding. I’m no doctor, but I know what ours has said – sometimes a sneeze is just a sneeze and nothing more.

Convince Themselves They Enjoy Housework 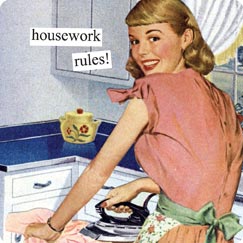 Were any of you around when I talked about Hello Kitty Toaster and I getting into an argument about housework? She isn’t even a parent yet, but you’d better believe that when she is one she is going to be a pretentious parent. The crux of the argument was that she said she enjoyed doing housework. Not the house being clean afterwards, but doing it.

I’m perfectly fine with embracing my misery though. Cleaning up after the ungrateful slobs that live in our house is not fun. I hate it. Cooking healthy and delicious meals for them to either scarf it down like feeding time at the barnyard, or throw it in the trash and say it’s gross without trying it – well, that is just absolute bullshit too. I can’t stand these pretentious parents that claim they love cooking and love cleaning and “oh please, can you give me some more laundry to fold?!” And what is worse about this is that anyone who is honest – God forbid that – is called a jerk by these pretentious-everything-shits-roses-parents for doing so.

I call bullshit on all this pretentious parenting. From the ass wiping to the 10,000 photographs of the bastard kid standing in front of a flower. Let’s get back to cool as fuck parenting, like I had when I was little. My Little Ponies on TV and my mom always bitching about how my dad acted like she was a slave. Meals other than chicken and rice every night and being told to brush it off and carry on every time I fell and scraped my knee. Those were good times; better times you might say.