Have you “liked” my blog on Facebook yet? No? Shame on you… Well, here’s something you can really do for me – click the link for Top Mommy Blogs dot com to register a vote for my site as one of the best. Thanks!!

I have a new, weekly theme on my blog. It’s called “Shut the Fuck Up Fridays.” Quite bluntly put, there are a lot of people in this world that really just need to STFU. But they never do because no one seems to have the balls to tell them so. People are so worried about having positive vibes and not offending anyone that it’s like we’ve let stupidity and asshattedness run rampant for the sake of everyone feeling good.

One of my favorite philosophers – Søren Kierkegaard – said that his mission in life was to make things more difficult for people by telling them the way things are – even if they did not want to hear it. Just under 200 years later, I’d say this was his way of telling people to STFU.

For this, the first installation of Shut the Fuck Up Fridays, we’re taking on JerkMom, One-Uppers, Pinterest Users, and Contemporary Ballers. And I’ve brought along my friend Angry Schoolboy to help. 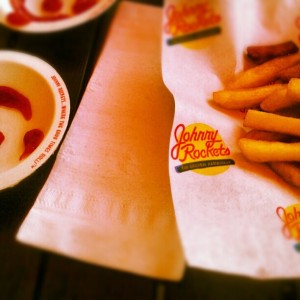 Yesterday I went to lunch with my dad. We were planning on going to a locally owned place by the airport, but it had a one hour wait with tons of booths open. So screwing that place, we moved on to the closest spot – another trip to Johnny Rockets.

We sat outside and were enjoying our meal when all of a sudden this horribly pretentious-looking woman with nostrils so large I could be inhaled into them came up to the host with her old hag of a mother (similarly as pretentious-looking as she) and her kid in a stroller. There was a sign that said no strollers and she said “can you make an exception on this ‘no stroller’ thing for us?”

Really bitch? Angry Schoolboy has something to say to you: 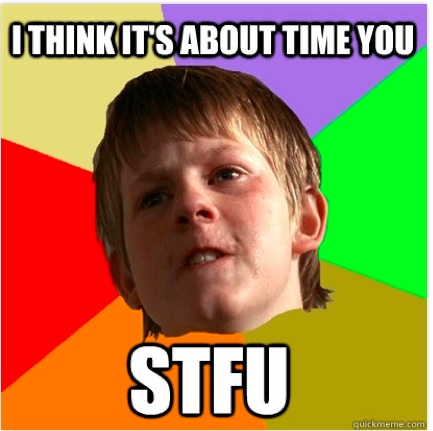 Have you ever had a conversation with someone that constantly has to one-up you? The first inherent sign of this person is that they constantly “know” or “have experience” with everything you are talking about. I was in a relationship once with a one-upper and I called him on his shit by making up a fact about the US dollar bill and saying “did you know that …” and he said he knew; to which I (of course) had to tell him I had made the whole thing up to prove he’s a dick. The relationship didn’t last long after that.

Recently I’ve come in contact with a lot of one-uppers; the most notable of which responded to every story I told with “Oh yeah? Well I’ve got a story that can top that.”

You don’t say? You have a story that can top mine in every single thing that I do, experience, think, or feel? Angry Schoolboy has something to say to you too: 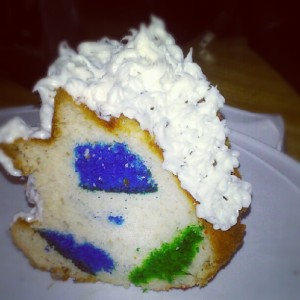 Yesterday I posted a blog about how Pinterest and Instagram have ruined my life, by virtue of making everything I cook or do have to be an event worthy of photographing. I included photographs of things I had cooked, quite obviously to illustrate my point. Then – in a moment of true hypocrisy – I pinned the blog post to my Pinterest board set up for my blog, with a clear title and description of the blog included.

I got quite a few click-throughs, none of whom enjoyed my blog. In fact, they apparently didn’t even read the title or description on the pin because they were expecting a recipe.

I don’t understand, where is the recipe for that cake?

Cute blog, although you could get the point across with less bad words. Are you going to post the recipe for those BLT bites at some point?

Can you at least include links to the cake recipe next time?

Came for the cake recipe. Left because you have an attitude problem.

This morning I saw on Fabulous and Flawed’s Facebook page an eCard about people that use the term “swag.” I wholeheartedly agree – the majority of the time that I see a person use the term “swag” or it’s derivative “swag life” I cringe.

What the fuck does swag even mean now? When I worked in politics that was the term we used to refer to political buttons and t-shirts; although, I am almost certain that popular culture has completely redefined it, like they did with “epic.” Now I see people using the term everywhere. “I’m so swag.” “Got my swagger.” “Kickin’ it on the roof #swag #swaglife.” Do the people using this term – I can only assume inappropriately or out of its original context – realize how stupid they sound?

If I am way off base and it makes sense or actually means something, well then my bad. If I am correct though, Angry Schoolboy has something to say to these contemporary ballers: