Yes, that’s right: you faithful blog followers are getting a double dose of the B(itch) today for I have come to something of an epitome that cannot wait to be shared: apparently, my local taco shack now serves douchesauce. 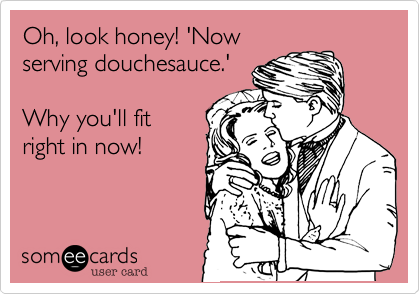 Awhile ago, I had a bad day and posted about it. Included in there was a pretty (retrospectively speaking, of course) hilarious story about an asshole sneezing in my tacos. We have a local taco shack that we go to maybe once a week or so; being a non-native to California, I gobble up Mexican food like my next door neighbor gobbles up drug-related misdemeanors. In other words, I’m stuck on salsa and tacos and all things spicy. Okay, but I’m a pretty picky eater too and like the healthy food kid options at the places that are a step above your average my-Dorito-is-a-taco-joints, so this taco shack pretty much remains my regular go-to. When I posted about that dude sneezing in my plate (I mean, he literally bent over and sneezed right into my food), it was there. I considered it a one-time incident and can laugh about it now.

The last few times we’ve been there, some pretty bizarro things have gone down, though. There was a fight going on in the parking lot when we left one time. Another time – I shit you not – I heard a guy say to his girlfriend ‘don’t worry about it, baby – you can pay me back later’ as he pointed towards his pants region and winked. So I guess you could say I’ve started to realize this place attracts a particular type of person. That person is – in a word – an asshole.

Today was no exception.

After ordering our food and picking out our table, I was waiting for our number to be called and I noticed a pregnant lady waddle in with the baby daddy. I knew it was the baby daddy because she said as they walked in the door “oh, the baby is kicking so hard right now!” and he said “that’s my boy!!” It was also obvious, though, that they were not really together; and in the event that I’m wrong and they are, the situation is clearly messed up.

So pregnant lady ordered her food and went to pay for hers separately from the baby daddy. Her card declined. She looked around embarrassed, made excuses, said she was just at the bank, then rifled through her wallet for money. Now, let’s not impose judgment on this woman one iota about how if she has no money she shouldn’t be eating out; or any other such thing. Let’s focus on what the baby daddy did – just fucking stood there. When she finally found her cash and was able to use that, he ordered his food and paid for his and then made a comment while they were at the salsa bar that really put his status as douchesauce over the top – “maybe you shouldn’t have maxed out your card on the crib and just had the baby sleep in bed with you, like I suggested.” 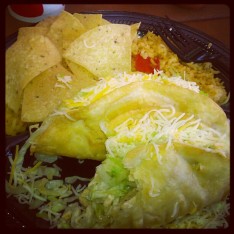 Then we finished eating and I was going to throw away our trash and leave our tray on the top of the trash can. Standing in front of the only trash can there, though, was a guy about 50 and clearly angry with the world. I said “excuse me” and he didn’t move. I smiled – looking him directly in the eyes – and said “excuse me, can I just throw out my things?” and he moved about 1/2 an inch, crossed his arms, and scowled as he waited for his food. I squeezed in to throw away our trash and then his number was called. He jumped a little and bumped my tray, knocking all our empty plates, leftover rice, and used napkins on the floor.

He walked out without a word of apology.

No wonder our children in this town are either bullies or bullied. It seems almost obvious that so many kids are on medication for anxiety and depression around here when parents are such jerks – even to each other. I’m pretty horrified by the way some of the people in my community treat each other; and apparently my local taco shack is the Grand Central Station of it all.

‘Now serving douchesauce’ should be included on their menu. Of course, I won’t stop going – the tacos are good and the company has nothing to do with the assholes that eat there. But one day I’m going to finally speak up and be the b(itch) I am on this blog. Then it’ll be b(itch)sauce that’s being served.