So if you aren’t following me on Facebook, you’ve missed some of the fun that has gone on in my terribly mundane life these last few weeks. Most importantly, you missed the part where I had a little bit of a meltdown because Pookies is on this 12 day trip away from me and we are going on 6 days now incommunicado. That, in combination with my general unhappiness with life as is (I want to move back to Chicago so bad I can taste the pizza) led to my husband worrying so much about my mental health that he decided to send me on a three-day jaunt to Solvang.

I’m fairly certain the decision to do so either came because (a) he knew I was about to get a visit from Aunt Flo and would be particularly bitchy in addition to all this other mental drama; or, (b) considered it to be far cheaper than sending me to a funny farm with straight jackets, rolling meadows, and electroshock therapy for a few months.

Okay, I don’t really think I would need shock therapy, but I do feel pretty in a funk these days.

So today was Day One of the mental health fix.

#1 If the fix for a case of the funks is eating and drinking, Solvang is the place for it. 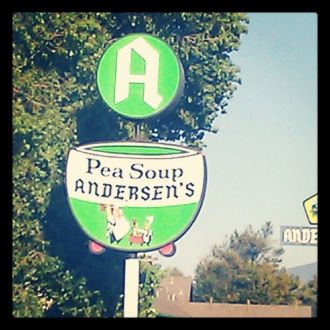 For those of you that have never been to Solvang, CA, it’s kind of like a faux Danish town. It’s in the middle of wine country and the fresh, local, and Danish food is a big attraction. But it isn’t just the Danish food: it’s any food.

Dinner tonight was at Pea Soup Andersen’s, where I had a turkey sandwich and mashed potatoes. Unlike the rest of the people in the restaurant, I ordered my gravy on the side, which I was thankful for because the serving-size was a full crock.

Did you faithful blog followers get that? A fucking crock of gravy.

#2 If the fix for a case of the funks is doing a bunch of weird, bizarre-o shit while drunk, Solvang is the place for it.

There is a lot of Scandinavian heritage stuff everywhere. Every corner has a fucking windmill on it. And Hans Christian Andersen is their town hero. It’s a little weird. A little local-yocally. But it’s good if you need to get away and slow down so your brain doesn’t fry completely.

After rolling into town, I got everything settled into the hotel, which also has a windmill on the front of it. I drove around a bit, made a little bit of a plan for tomorrow, which will include: visiting the Santa Inez Mission, checking out the 34 inch miniature ponies on the pony farm, wine tasting on the Solvang wine walk, going to the Hans Christian Andersen museum, shopping at the All-Year-Long-Christmas store, and making candles in the candle shop. I’m also going to the casino and thinking about getting a pedicure at the nail salon with a large head bust of Andersen himself in the window.

Could this get anymore random?

Tonight at Pea Soup Andersen’s, I picked up: strawberry-rhubarb jam, pumpkin pancake syrup, cinnamon honey, wild blueberry muffin mix, and 9 cans of pea soup, tomato soup, and pea-bacon soup. Tomorrow will no doubt include more shopping. My biggest fear is that I just got my TOMS catalogue and there is a TOMS store in town. That could equal major damage to the pocketbook.

I’m heading off to bed soon. Another part of my funk is that I’m sleeping more. I’m considering it a good thing for the moment simply because when my little sweetsies gets back next Monday life will again get crazy in the kid-way.

14 thoughts on “Did Someone Say Funky Pea Soup?”

As you can see: Mom’s $100 apple pie is about to happen. • • • #itsamood #applepie #pie #baking #day26quarantine #momlife
Alexis is making friendship bracelets. Ava is standing on the bed. Carl is playing with power tools and eating watermelon. Your average evening. • • • #momlife #quarantinedays
The Easter bunny may be canceled, but we at least have Easter dinosaurs at our disposal. • • • #easter #spring #dinosaurs #toddler #toddlerlife #momlife
😍
We don’t do Saint Patrick’s Day, and yet here we are. • • • #baking #cupcakes #saintpatricks #stpats #luckotheirish
Thank goodness we were stocked on the essentials. • • • #food #cheesetray #cheeseboard #coronavirus #quarantine
Raise your hand if your kid wants you to watch their sport, but also prefers to play from the furthest distance from you. 🤷🏻‍♀️🙋🏻‍♀️😂 • • • #ava #fromadistance #tennis #teamtennis #jtt #usta #scta #tennismom #momlife #kids #fromadistance #leftie
And then we came home and dyed our hair. • • • #tennis #tennismom #kids #winner #tennislife #momlife #momofthree #scta
I have a 16 year old with endometriosis and migraine headaches. She’s also in high school and trying to set herself up for a successful future. I have a 12 year old readying herself for high school, and also going through puberty. And I have a three year who is, well, three. If you are coming to me for anything but to love and support me, go away. I deserve just as much as anyone else. • • • #dontatme #momlife #momofthree #kids #teenager #tween #toddler #toddlermom #roughpatch #support #hugamomtoday #kids #parenting #stayathomemom #sahm
I’ve been looking for a backpack for Carl for about six months, now. Everything was either way too big for a three year old, way too small to hold his things, or ugly. Finally I found this today at Carter’s, and it was cheap. Now I don’t have to worry about losing his crayons or books anymore when we go to the library. • • • #babysfirstbackpack #homeschool #preschool #3yearpreschool #toddler #toddlerlife #schoolsupplies #momlife #homeschoolmom #toddlermom
No bed quite as comfy as Mom. • • • #momlife #toddler #toddlermom
*cuddle* • • • #momlife #tween #ava