My husband freaked out a little bit because I was sitting around crying being so kidless and fancy free, the Pookies being gone for this 12 day trip away from me. For the record, I was not crying because I had free time, but rather I realized how much of a grave mistake it was to allow such a trip to happen. I wasn’t ready for it. Neither was anybody else it would seem, for when I finally was given the dignity of some contact yesterday, I learned that the cell phone has – in fact – been uncharged and off for the whole week, the allergy medicine has been ignored, and teeth have not even been brushed. I’m also pretty down in the funks because I have been wanting to move home to Chicago for about 7 years now to be closer to my family and it’s just not happening, although that is another story altogether. In any event, I was a little loose around the edges, so Poor Nick did what any husband would do: he sent me away.

I’m going home today, and you’ll all see that it’s about 5 o’clock in the morning, and I’m up: blogging and listening to Tom Jones. You’d think that is a sign that this little mental health retreat isn’t working, when really it’s that the people staying upstairs were having a party. Around 3 o’clock I woke up to the sound of people wading through beer cans outside in the parking lot: yes, you heard what I said. There were about 50 Modelo and Bud Light cans strewn in the parking lot and someone was wading through them, looking for his keys.

In any event, I think I’m ready to head home. I realized that, while Solvang is the place for a mental health retreat, it’s also the place for overindulgence, douchey yuppies, and losing all your money to tourism and more tourism. 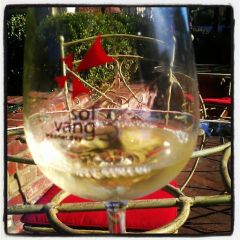 I decided yesterday to do the Wednesday Wine Walk that the local-yolcals host to try and inspire business. For $20 you get a glass, a map, and five tickets for wine tasting at the participating wineries. Each ticket gets you two tastes.

I got through two places that were on the list, plus one next door that I had to pay separate for. All of them had (for the most part) the shittiest wine I have ever tasted in my life, coupled with a crowd full of douche bags and dogs walking around sniffing people’s assholes. When I got to the fourth, the fifth, and the sixth, I learned that the wine tasting event was being hosted by wine tasting rooms that did not even intend on being open until said event was over.

That’s right. I bought tickets that said “good for tasting until 7” and the last three places participating closed at 6. The most egregious was that the one I bought my tickets at earlier in the day was one of them.

Just yesterday I was thinking to myself that these people drink a lot. I mean, a lot. I know that in Europe people drink a lot more, but I’m really a “glass a day is good for me” kind of gal. Possibly they keep the alcoholism under control by never fulfilling what they actually sell.

So I went to get some dinner instead, and was too tired to cruise all the way to Santa Ynez as my plan was, so I just decided on this local brewery/restaurant that seemed pretty popular since people were crowded all around and inside it.

And then I realized something else.

All of the food here tastes like a fucking pancake 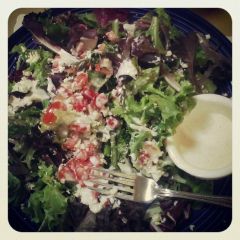 And I don’t mean a good pancake. I just mean some weird, fucked up pancake that is like the cross between powdered sugar and my Trailer Trash Mom’s asshole. Some of the food I had was good, like the ham and cheese croissant I had for breakfast yesterday, and the turkey sandwich I had the first night into town. But for the most part, everything tasted like that shitty pancake.

There are some things that should not have shitty pancake flavor. The chicken and mashed potatoes I had for dinner at that supposedly good brewery/restaurant is one thing that should not have tasted like shitty pancake, yet did. The salad I had for lunch yesterday too … probably shouldn’t have tasted like pancake. And that was like a spicy pancake, which just boggles my mind to even think about right now. At the time I was eating it I thought it was good, but then two hours later – as the taste of spicy pancake lingered in my mouth – I realized that something was wrong with that shit.

Everyone here thinks they are actually living in Denmark

I’m all for upholding your family heritage and everything, but for Christ’s fucking sakes people!

* Slapping a Norwegian flag on everything from t-shirts to iPad cases does not justify marking up the price 190%.

* Speaking in Danish when you say you grew up in fucking Orange County is not authentic. Ever skede lederhosen your ass back to Anaheim!

So yeah, I’m about over this place. I’m ready to go home and return to my carefully crafted life of laundry, dishes, cleaning house, homeschooling, and wiping asses (literally, figuratively … you decide). Before the return of the Pookies on Monday, I have a few more things to catch up on anyway. As I sit here, with pancake taste in my mouth, shitty wine burning my gut, and every drunken wanna-be Dane outside wading through piles of aluminum beer can trash, I realize that depressed or not, in a funk or otherwise, it’s about time I ever skede lederhosen my own ass back to Camarillo.

5 Replies to “Did Somebody Say “Get Me Away From These Douchey Danes!”?”