We went to a couple family parties this weekend. One was a Labor Day bar-b-que – which was relatively mild; the other was a family dinner in honor of the seventh birthday of my cousin’s kid. These parties (the latter for the most part) inspired me to compile yet another list of pet peeves. Today while we were eating lunch at Panda Express, I got a little teary over the music they were playing and realized it must be getting close to Rag Time, so excuse me if my reasoning sounds particularly bitchy.

You Scratch My Back, I’m Not Scratching Yours

How many birthday parties have we gone to where the other person never comes to ours? These people with this seven year old kid (relatives of my Trailer Trash Mom) are the worst offenders. They are the only real family we have in California – which makes it particularly difficult – because every kid party we have they never show up for, making ours sort of un-kid kid parties.

Year after year, though, I send down a gift when it’s time for one of their two kids to celebrate another birthday. When they have a family party for it, we make the two hour drive there and two hour drive back and bring wine and a side dish. We smile. We listen to people talk about their hillbilly family dramas. We show interest when my aunt talks about all the oppressions put upon her working for the Girl Scouts. We laugh when her husband tells jokes about watching pornography on the Internet.

But when it comes time for a kid party here, they can’t make the same trek.

Cow-Towing To the Old People

I’m sure when I’m elderly, I’ll want everyone to cow-tow to me like they do at my family parties. Kiss my ass and act like everything I say is plated in gold and shit. I’m not being a dick, either, by saying it’s a problem to let the elderly have the comfortable chairs or use the bathrooms first or whatever would make me sound like a real asshole. Because that’s not what I mean.

By cow-towing I mean that everyone in the family acts as they always do – as though what the old people say goes. An example: my grandma and grandpa went to college in Nebraska, so of course are Cornhusker fans. But if you aren’t a Cornhusker fan too, you have to sit there for forty-five minutes while grandpa fucking yells at you for being such a dumb ass. It’s really mean, actually, if you think about it because he will shout at you and tell you to get out of his presence if you support a team other than the Cornhuskers.

Just about everyone in the family swore their allegiance to the Cornhuskers a long time ago just to get grandpa to shut the hell up.

Oh dear God, this really roasts my ass. If you think it’s totally acceptable to let your kid drag you around by your she-balls, and therefore prepare meal after meal after meal until you settle on Spaghetti-O’s because your precious cargo has been conditioned (by you) to be a terribly picky and unhealthy eater – well then you should stop reading now. Because I don’t tolerate that shit, and so it really pisses me off when other people do it at a kid’s party we attend.

I can see that not all kids at the party are healthy eaters and the host just doesn’t want them to go hungry. I’ll accept that a lot of people were born and raised in a barn and, therefore, don’t care much about instilling basic values in their kids’ upbringing.

At our house, you have to try everything that is put on your plate. If we go out to eat or to someone else’s home for dinner, we all eat what is served. We do not request that people make us something special because we’d rather have neon-orange fat-O’s in a can.

At the family dinner Sunday night, they served BBQ chicken, bread rolls, fresh fruit – all in all, a pretty healthy meal. You can imagine, then, that I was fucking livid when I saw my mom carrying plates of per-request food for all the kids, none of which had BBQ chicken or fruit. All of which were covered in Spaghetti-O and macaroni and cheese slop. 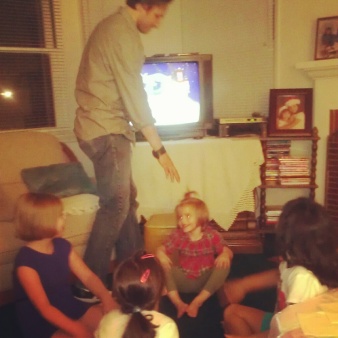 I mean, every party in which kids are involved is going to have a little chaos. But at least have it be organized chaos.

This party on Sunday was so poorly planned (go figure, it was done by my mother and her sister with the porno-watching-husband). It was supposed to be a kid’s party (sort of), but they really didn’t plan anything for the kids to do besides terrorize everyone else with chaos, out of control screaming, and whining that they were bored.

This is always a sensitive subject for some people. I get it: people didn’t come to the party to see my fancy house or my fancy clothes. So the place isn’t perfectly cleaned, and I’m wearing sweatpants – but we’re family so it should be OK, right? Or as a guest, you should just be grateful that I came and spent the money on a birthday gift and the time preparing these appetizers and the gas driving down and my Sunday that could have been spent doing something else I actually want to do, so I should be cool in these coolots and halter top, no?

Actually, NO. You should not be “cool” or “down” with people dressing down for a party. As is the case with organization, the least people could do is wear regular clothes or even just pants. When I opened the door to my aunt and her husband’s home Sunday, you can all imagine my surprise when I was greeted by her porno-watching husband wearing nothing but a t-shirt and Cornhusker boxer shorts. Maybe he was trying to impress my grandpa. Maybe he needed easy-access for when he’d be spending the duration of the party in the other room, looking at Internet pornography. Maybe he was just really hot. I don’t know, I just thought he could have actually put a pair of pants or at least shorts on. His boxers, in combination with my mother’s pant-wedgie that lasted the duration of the entire party and seemed to cause her nothing but pleasure, made the dresscode at this particular hillbilly brawl just intolerable for me.

After the lack of organization, the food problems, the underpants, the screaming at me for not pledging my loyalty to the Cornhuskers, and my mom rubbing her pant-wedgie further and further up her asscrack during the inevitable family photos that always cap off a family party with these people, I had just about had it.

What are your party pet peeves, faithful blog followers?