People sometimes tell me I look at the negative side of everything. I always think it’s funny when they say that, though, because it is only through being honest with yourself about a situation that you can make it better. Haven’t you ever gone to a wedding and thought to yourself “jeez, I’d never do that at my wedding?” Or had a shitty job and accepted the shittiness of it to push yourself to find something better? People with that gloriously naive-“must always look at the bright side of things”-approach to life generally (in my experience) stay in bad situations longer than they should because they can’t be honest about the uglier stuff that needs to change.

I refuse to waste my life accepting a pile of crap as a bed of roses just to sound pleasant to others. It’s just my opinion and approach to life, though. You don’t have to adopt it.

So last night I made my husband watch Mermaids with me. I’m on an 80s and 90s movies kick right now. It started with watching all the films Esquire suggested “all women” should watch, which included some 80s gems. Then as I perused through the Netflix Que, I noticed there were a ton I haven’t seen in ages. Some I had never seen at all.

It’s been so long since I last watched Mermaids that I had forgotten the crux of the story. It’s all about this teenage girl learning lessons in life from the negative bad-mom aspects of her “town tramp” of a mom. Reminds me a lot of my mom. For those of you faithful blog followers that are relatively new, I won’t beat around the bush: I call my mom Trailer Trash Mom for a reason. In the years since she divorced my dad, she has become a trashy, hillbilly, user and abuser; who has stolen, lied, and cheated more from me than anyone would tolerate. That whole “debt for life” thing has been repaid to her ten-fold at this point; although, I just can’t cut the ties because I want a relationship with my grandparents, which can only be facilitated if she is around (they think she’s the greatest thing next to stick butter, likely a consequence of old age and a very hefty piece of wool she’s pulled over their eyes).

In any event, watching Mermaids reminded me of the parenting lessons I’ve learned from the more negative aspects of my own mother.

Fortunately, when my mom breaks promises to me now, I only cry for about a day. When I was little, though, I’d cry for days – once a whole week.

I’m not talking about stupid promises. “Oh yes, you can ride the automatic-disease-ridden-pony in front of Toys ‘R’ Us next time, I promise.” I’m full of shit every time I say that, because that promise is to get the kid to stop bitching; although, will still not be happening. The thing has been covered with an unidentified slime for as long as I can remember.

I’m talking about big promises. “Dad promised he’d be at my Little League game and he didn’t show up or call!” is devastating, especially if it happens frequently.

Don’t turn your kid(s) into the parent

There’s a scene in Mermaids when Winona Ryder’s narration acknowledges that her character feels like the parent sometimes. And she is. Her mom is too much of a two-bit town whore (although she tones it down at the end) to even prepare a regular meal. This is something my mom used to constantly do.

When my mom first left my dad and moved across the country to Seattle, I’d visit twice a year. In the beginning she was the “other woman” to a married guy in the military, who was a night guard in the prison. Naturally, when her only daughter came to visit, she couldn’t run the risk of losing her status as the “other woman,” though, so she’d leave me sitting downstairs to fend for myself the entire trip, while she’d entertain him upstairs all day while his wife was at work. I even had to cook my own meals, which was difficult since I was only 10 at the time. I once threw Cheetos into a bowl of white rice I found in the refrigerator. Fucking disgusting.

Nothing sucks more than having to grow up too soon because your parent has the maturity of an infant.

I have had so many uncles in my life, it’s a good thing they weren’t real or family reunions would need a bigger venue.

My mother had so many men coming in and out of her life until only recently, when she married this guy that lives in a trailer out in New Mexico, I have lost count. I do know there were at least eight Mikes, three Rons, two black guys (the first was Marvin Gaye’s drummer), six with gambling problems, and one nice guy out of the bunch (who, of course, my mom dumped for no reason). Each of them was referred to as uncle, which just traumatized the shit out of me.

In recent years, she’s started introducing her boyfriends as “grandpa such and such” to the Pookies, which is when I realized the importance of this Lesson 3. I immediately put my foot down. No to “Grandpa Bugsy”. No to “Grandpa Yogi.” No to “Grandpa Mike.” And no … the hillbilly husband will be no “Grandpa Dennis.” 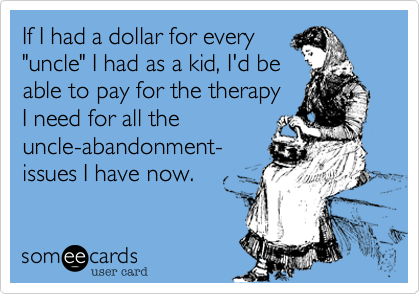 Never settle for less in life, or expect your kids to either

When I worked in pharmacy during college, I worked with a girl that would not allow her daughter to have any conveniences that she was not given as a child. She wouldn’t let the poor girl even go to birthday parties of other kids because she had not been allowed to as a child. It made me so sad every time I saw it happen, which was a lot in the six years I worked there. My mother has always been like this.

After divorcing my dad, my mom did nothing but settle for less. She’d debase herself to settle for men she found in bars. She’d settle for less with jobs and cars and housing and friends over and over and over again. She still does. Her most recent stunt of settling for less is starting to bite her in the ass – marrying this hillbilly in New Mexico. He’s a total jerk to her and she has the nerve to say that since she’s settling for jerkish behavior that I should too.

I don’t think so.

These four lessons that I learned from my mom are pretty important ones, and I wouldn’t have learned them had I not looked at the negative side of my mother’s behavior over the years. I almost feel grateful for my “negative” approach, because had I not taken it I may have just accepted these behaviors as acceptable and continued the cycle I see so many other women in my community continuing with their own kids. When you look at old movies, like Mermaids, you can see that a lot of people used to hold this perspective. Look at the world for what it really is and overcome it. Not just settle for happy positivisms all the time just to make everything seem great to others.

See how much happier I am in my “negativity”? I mean, can you even still call it “negativity” when so much good is coming out of it?

14 Replies to “Four Parenting Lessons I Learned From My Mom”