Please don’t take this the wrong way if you do the blogger award thing, or if you do that daily list of tagging all the people you think are just fantastic on Facebook. I don’t think you are stupid. And I very much appreciate when people have thought of me in either event. I just think that the whole concept behind it all is a little dumb.

Allow me to elaborate.

So there are all these blogger awards. It’s pretty chic in the blogging world to get one, post about it, pass it on; but in the process refer to it as a chain letter. Basically say that I am too cool for it, but allow me to lower myself to this anyway. That is essentially what I think of them as too (chain letters); although, I will repeat that it is pretty fucking amazing when someone I probably have never even met takes the time to recognize me for whatever reason they have recognized me.

Again, that, in and of itself, is fucking rad.

Then there is the fact that a lot of your readers may not even be bloggers. This means there are a lot of people that want good content, not bullshit posts about the cleverness of chain letters.

Onto Facebook shout outs. Again, these are great in the sense that it is awesome when someone thinks about you, and feels like they should share you and maybe even your content. It’s rarely your content, though. Usually it’s a list of people – always the same. Often it becomes an unreciprocated activity, as well. And sometimes you share someone on Facebook and the dillhole doesn’t even say “thanks.”

So I’m pretty on the anti-side of blogger awards and Facebook shouts outs. I will repeat one more time so you assfaces don’t get all facehurt by my saying this: every goddamned blogger award and Facebook shout out that has been done for me has brought a tear to my eye. That complete strangers could develop a relationship such as I have with some of my bloggie friends, and take the time to try and promote me (each other) is fucking awesome.

Now all of that aside, I realized recently that I need to do some spreading of the love, so to speak, for all the blogger awards, Facebook shout outs, Twitter #FFs, and otherwise mentions, with a little roasting. I have a much different way of showing my love, though. If you know me personally, you know that you know how many oodles I love you if I make fun of you a lot. Teasing is my hugging. Poking fun at are my smooches. My affection comes in the form of giving people crap – it’s really fun if you live with me. Well, at least for me. There are a few rules of my game, that I made up in my own mind. Just now.

1. If you are a blogger or not, read these with a grain of salt. Consider checking out these blogs because they really are fabulous writings by smacktabulous people.

2. If I left you out, don’t be hurt. Chances are I will be making fun of you too in the near future. Just you wait…

3. Please still love me when this is all done.

I’ve already shown her this, but really she deserves to have it plastered all over the fucking Internets with her home address attached to it. Then we’ll all show up and egg her fucking house until she fixes this photo. If you are into books and book reviews and witty musings on all things bookworms, and otherwise, check out Words for Worms. Just ignore the fucking Ayn Rand cover she has on her homepage and Facebook cover. Puke, Katie. 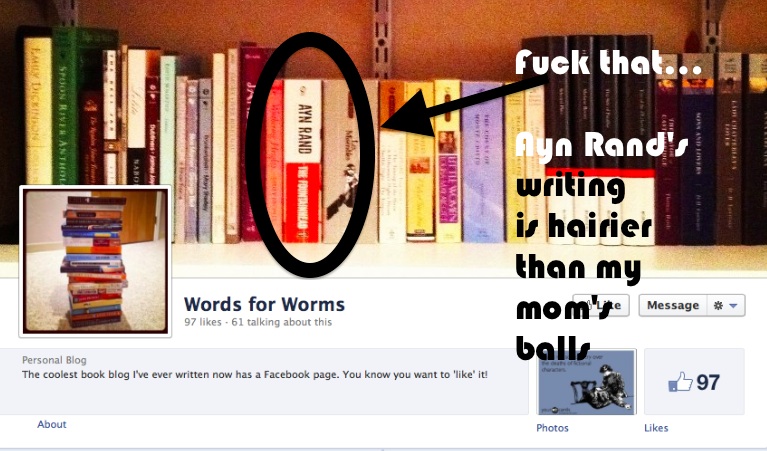 So Words for Worms and Quirky Chrissy are real life friends. They really pulled the wool over our eyes, that’s for sure. I mean they were pretty sneaky when they mentioned all the time that they were talking to each other; or that Katie almost poisoned Chrissy with a chicken or some shit. Yeah, joke’s on me fuckers, but I finally put two and two together and realized that what Katie lacks in common sense on the issue of Ayn Rand, Chrissy makes up for in total klutziness and – as the title goes – quirky, yet fucking awesome, blog posts.

One thing that has recently harried my brain, though, (also more than my mom’s balls) was when Chrissy made some comment about Justin Bieber on my Facebook. I asked her if she was a Belieber (hoping she would understand that I punch my own self in the boob out of anger every time I hear about the underage Canadian), and she fucking responded by quoting a Bieber song. Thanks, bitch. Thanks a fucking lot.

Oh, I do love her. Fruggie is a mom blogger and, so I assumed by the title, a frugal living blogger. But every time she posts a picture or a video blog, the first thing I think to myself is “shit, this bitch has got a nice house!” Fucking china on the walls and shit. And she’s constantly talking about drinking tea and eating crumpets, and toasting jubilees and other nonsense with champagne.

Now there have been a few posts about doing shit for cheap. Like that rad pizza post, which I promptly ignored because I’m from Chicago (which means I’m way too good – in my own mind – to take pizza-making advice from anyone). But champagne? Tea and crumpets? Fuck that. Frugal champagne comes in a can. And the only fucking tea and crumpets cheap deal-getters eat are the ones made from dust off the floor and dirty sink water. Bring me some fucking deals like that, bitch!

Sean – a professional photographer – writes Meat Me. I really enjoy his blog, simply because he does a wonderful job of putting together video blogging, amazing photographs, and awesome stories behind his favorite thing: meat.

But seriously, man – one more fucking grease-filled photo of beef and pork covered in lard and saturated fats, and my goddamned arteries are going to completely clog in sympathy of yours.

I really love Alien Red Queen. She’s a talented writer; she has pretty thought-provoking ideas on her blog; and every other thing out of her mouth to me is “fuck that.”

I tried to send her some pumpkin bread about a month ago, though, and the post office called it a threat to the security of our nation. After some hefty thinking about this, I wondered if it had anything to do with her blog. Why you ask? Take a look at her home page.

Well that’s a start on sharing my own version of love. Please don’t hate me, especially if I roast you too in the coming days. Stop the blogger awards already, people. And the Facebook tagging bullshit. #FF is really nice, but as First Time Mom and Dad and Ashley at Sorry Kid, Your Mom Doesn’t Play Well With Others mentioned just today, a lot of a-holes Tweet it without actually following you. Just what in the fuck is the point of that?

Really, what in the fuck is the point of any of it? That’s what we should be asking ourselves. For me, it’s about having fun. And clearly, making fun of people. Love you?

UPDATE 9:33 PM: First Time Mom and Dad did the post on Tweetholes … a similar issue. Check it here http://www.firsttimemomanddad.com/2012/12/the-politics-of-blogging.html