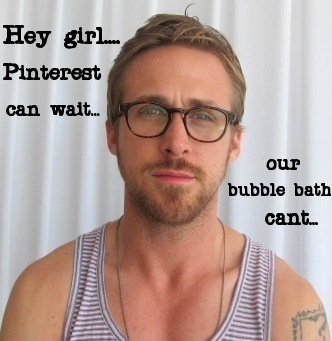 I am going to be honest with you faithful blog followers. I really and truly had no idea what the whole hub-bub was about with Ryan Gosling. Sure he’s hot. He has that patch on his abs that makes a woman salivate. But I never got the whole “hey girl…” meme. I never understood what anyone was talking about.

I will be honest. After seeing The Notebook, I abandoned Gosling. As a writer, quite frankly I get offended by tripe and just about any book-made-movie by Nicholas Sparks is just that. The Notebook is crap. Cliche, overblown, under-realistic crap.

Last night, my husband and I were sitting around looking for something to do. We’re pretty boring people when there isn’t kid puke to clean up, or an ass to wipe (other than each others’ that is), so as usual Poor Nick suggested we watch a movie. Of course, I said “OK” and before even asking, he turned on Blue Valentine.

He said that it would be a sexy movie. A sexy movie that would put me in the mood. In spite of that, he had already started it, so I agreed. In the end, the movie depressed the shit out of me and sent me off to bed in sweatpants and with Kleenex in hand. Oh what a fucked up tale of romance beginning in a bad situation and ending in the worst situation possible that was; but let’s not talk about that.

In Blue Valentine, Gosling plays the older and younger version of his character; by older we’re talking four or five years difference. The difference in appearance is drastic, though; as I understand for dramatic effect. We’re talking a little bit of a gut. Widow’s peak. Raging alcoholism.

In other words, sexy.

Usually I rail on this blog about hating hillbillies. Alcoholic weirdos that smoke cigarettes, drink beer before noon, and have a constant stream of dirt under their nails are the very antithesis of the class and decorum this foul-mouthed lady considers attractive. Well now there is one exception and it’s name is Ryan Gosling.

It may sound messed up, but when Michelle Williams’ character was giving him a hard time about the fact that he drank beer at 8 o’clock in the morning, I perked up. The dirtier he looked, the hotter he was. Every time he had a cigarette dangling from his mouth, I wondered how amazing it would be to smell his breath. Creepy, huh?

#2 Ryan Gosling Turns Apathy Into a Term of Endearment

For me, the most heartbreaking part of Blue Valentine is that Gosling’s character doesn’t even know if Williams’ baby is his. She says she doesn’t know, and yet he marries her and commits to care for her and the baby as his own. Years later, we see that he has developed this unbelievable relationship with his daughter – one of affection and closeness that every father should aspire to – and he is perfectly content being a husband and father and nothing more.

Many would find that to be a sign of laziness. Apathy. An alcohol-induced lack of motivation, I believe that it really was a beautiful thing. I think Gosling’s character had it right – that work was a means to spend time with his family. That life was defined by those he loved and what made him happy was being with them. It was beautiful.

And it made me officially cross the threshold from hesitant viewer to “if this man was near me, Poor Nick would have to worry.”

I’ll never forget when my cousin and I went with my mom to see First Knight in the movie theatre. He and I laughed through the majority of the movie simply because every time some sort of passion-infused moment was on the screen, my mother’s lip began to quiver. She’d grab her Kleenex, breath heavily, and try to get herself under control before the tears came a-streamin’. And then, there was a moment when Richard Geer was sitting in front of a fire with no shirt on. He was just sitting there – no romance or death or anything. Just sitting, warming up.

My mother wailed so loudly, the entire theatre turned to look at us. She cried for the remainder of the movie. 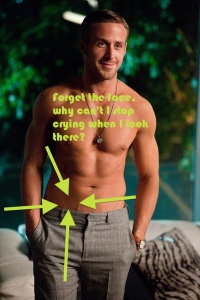 I never understood that. I mean, my Trailer Trash Mom is pretty trashy and pretty nut-so 99.9% of the time, but what in Jesus Tap-dancing Christ’s name could make her wail like that? I never understood.

Then Ryan Gosling came on the screen half-naked in that hillbilly wife beater. The tears began to well almost immediately. The sex in the movie is actually at a minimal, although there is a pretty racy oral sex scene that made me feel a little faint. But just like with my mom, it’s the topless shot – not of Geer, of course. Of Gosling. Topless Gosling. Abs. That spot. I don’t know what it was, but I cried for about an hour and a half after the credits began to roll.

I think in the end we were lucky that we watched Blue Valentine at home. Had it been at the movie theatre, I would have been in front of others when I stood up and shouted “take me, Ryan Gosling…take me here and now!!”

This must seem weird to you faithful blog followers, though. I mean previously I’ve only reported crushes on weird old men and Hulk Hogan for the possibility of being pile driven nude. You know what would be hot? If Ryan Gosling played a wrestler in a movie. He could choke hold. Pile drive. Fist slam. Imagine the possibilities.