A lot of people think my husband cheats on me. They have for a long time. I can tell with some, by the looks they give me. You know them: the looks of pity that this poor woman is just so stupid she doesn’t see what’s really going on. Others outright tell me. Sometimes my mom and her husband refer to Poor Nick as “that lying’ cheatin’ S.O.B.” and still other friends and family are more eloquent about it than they.

To their credit, he does act like it. He comes home late all the time. He says he’ll be home at a certain time and shows up hours later. He can be kind of a jerk to me at times. By jerk, I mean he blows off my birthday, sides with strangers over me, tries to shame me for being a woman, and ignores the majority of our conversations. He says things like “excuse me, I have a life outside of here” in reference to our family. He withholds affection about 95% of the time. He lies. He spends a considerable amount of time deleting things from his cellphone. He picks fights over petty things. I could go on, but I’m not helping my point here.

Because then there are the signs that he isn’t cheating on me. There aren’t many, but I do know that as long as these status things are in place, all is well in the matter of our marital monogamy. 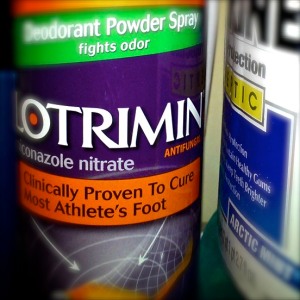 My husband has always had the most rancid smelling feet on the planet. I remember when we first started dating. He had a shoe rack by the front door of their condo, and the scent was so overpowering I would always try and find excuses to go in through their garage whenever I went over there.

No amount of foot spray or foot powder or foot anything helps the smell, either. He uses a daily foot spray to avoid spreading his athlete’s foot issues to everyone else in the house, but it does nothing to contain the smell.

Have I told you faithful blog followers about this before? I’m sure I have. The problem with Poor Nick’s feet is his shoes. All of them are at least 10 years old, some of them disintegrate every time he wears them. He has these sandals that are so disgusting – and quite frankly cheap ($30); when he wears them, his feet sweat so badly that he comes home and there are black chunks of sandal stuck into the in-between of his toes. He asked for a new pair for Christmas, and I said “are you going to throw out the old ones then?” to which he said NO. So he got no sandals. On more than one occasion, I have been so horrified by the stench this whole sandal-sweat-disintegration debacle created that I’ve made him go wash his feet.

As long as Poor Nick’s feet still smell like a rotting animal carcass, covered in sweat and mildew, I know his heart is still with me.

One of the classic signs of someone cheating is they change their eating or exercise habits. It’s totally cool to eat more healthy or want to lose weight if you are in the red on either of those fronts. But if it’s sudden, unexpected, excessive, unwarranted, and secretive, you do have cause for concern (although concern over what is iffy – cheating, depressed, eating disorder, etc).

On one occasion, I did actually question what was going on when I saw Poor Nick download a weight loss app to his phone. Those of you that know him know that he is already underweight. The thought that he would want to lose weight horrified me; but then he followed it up by packing in two beers, a meal that had an entire day’s worth of calories in it, plus a dessert. Since then, I haven’t heard or seen anything about weight loss, so I’m resting easy that he isn’t cheating, depressed, or developing an eating disorder.

As long as my husband eats like he’s packing it in for a long winter, I know we’re good. And it isn’t just how much he eats, but what he eats. Red onions in copious amounts. Garlic by the baleful. Hot dogs smothered in relish. There isn’t another human being on this planet that would tolerate the way my husband smells after a rousing game of “let’s see how many hardboiled eggs I can eat.”

Am I the only woman on the planet whose husband plays experimental game with his hair – head, as well as facial?

“I want to grow it long.” “I told her to just trim the top but let the back grow.””I decided to just buzz it all off.”

“I felt like the feel of a smooth face.” “I like this little patch of facial hair here!” “What’s wrong with hair growing down and around the back of my neck?” “Sideburns are in again.”

This is a weekly thing in our house. Poor Nick is constantly playing games with his hair, which is rife for embarrassing family photos and people thinking I’m in a relationship with a fifteen year old. When he shaves off all his facial hair, he looks like a teenager – really, he just looks so young. When he leaves some but not a full beard, he does this ridiculous gang-banger, cholo thing. Once I Googled it and found picture after picture of gay gang members – all sporting the same facial hair.

Here is how I know my husband isn’t cheating on me right now. In spite of some of the mean things he’s said recently. Besides the fact that he let another woman (the carpool lady) keep him at work two hours late, waiting for her to get off at her respective job, then yelled at me that I just didn’t understand the demands of her career. Spitting in the face of the two hour argument he picked over whether or not we should switch to only two DVDs on Netflix a month to save $3. I know my man is still my man because of his most recent bad haircut.

“I told her just to trim it up” turned into short on top, spiky on the sides, and long in the back. The back actually poofs out behind his ears to make what is perhaps the most amazing inadvertent mullet of all time.

At this point I’m kind of hoping my husband doesn’t read this blog. In more ways than one, I’ve taken him down much further than even Chinatown. But it’s all true, and it’s a good thing – I know he isn’t cheating on me! But if the intoxicating odor of his feet, or his diet and hair habits ever change I know I’m in trouble.

One day, it’s liable to happen though. Poor Nick will walk in the door and his hair will be clean-cut. He’ll say “I’m tired of playing games with my hair, and I’m not hungry tonight. I’m going to the gym. Alone.” Then when he gets home, I’ll notice all new shoes and a surprisingly fresh scent wafting up from his feet. That’s when I’m screwed.

Do you have signs that your significant other is remaining faithful? I bet they’re not nearly as … unique.