When my husband and I first got married, his bosses gave us a pair of their season tickets to a Lakers game. Sure, I fucking hate the Lakers and anything-Los Angeles, but they were two rows behind court-side, so I figured – what the hell?

What they failed to tell us was that their tickets were seated directly behind those idiotic Kardashian whore-faces. This was when Lamar was still on the team, so the whole time we had to sit there and listen to the mom, Khloe, and one of the pig bitch teenage twins talk on their fucking cellphones about how much they hated basketball. It was horrible, only made worse when Khloe fanned her nappy hair out and spilled dandruff into my goddamned nachos.

So during the halftime, they had a security guard set up right there to stop people from coming down, although once Mother Hubbard and the Pig Bitch left, Khloe allowed her fans to come ask for autographs. The number of desperate and pathetic young women that approached the overweight, acne-ridden, dandruff-fanning cow was astounding.

There are few celebrities that I despise more than her after that whole dandruff incident. And while I would offer to have Derrick Rose’s babies while asking him for a signature, I would never ask these celebutants for anything other than to get out of my way. Here they are, in no particular order:

This woman’s ass is so fucking horrifying. Sometimes when I see the emphasis placed on it in photos or magazines, I feel like asking her fan club if it’s got it’s own zip code. And now someone has allowed her to breed? Yeah, let’s see how fucked up that kid comes out. It’ll have a big ass, be just as much of a pig bitch as the rest of those Kardashians, and will likely carry itself with the shameless sense of entitlement the entire family has.

#2 The Walking STD: the Biebs

I don’t mean to imply that Justin Bieber is a slut or anything, but I do sometimes wonder about a 17 year old that let the papparazzi photograph him dry-humping his girlfriend on a beach in Hawaii. Two years later, the Biebs has turned 19 and in celebration, the media has made his news story about said birthday more popular and of importance than the country’s fiscal crisis. Worse, Justin apparently has spat in the face of all fashion sense at this point, because he’s walking around with no shirt on, wearing tight blue pants, with his ass hanging so far out, if you look close enough you can probably see his teeny-weiney hanging down.

Something that really irks me every time I see Kristin Stewart is that she always looks like ever-living shit. And yet still ghads of teenage boys and middle-aged lesbians are wanking off to her nightly. I look like shit all the time and you don’t see people wanking to my illustrious debacle of an appearance! She doesn’t just look like shit, though – Kristen Stewart has got to have the worst attitude on the entire planet. She’s always bored. She’s constantly agitated. And her hair looks like it hasn’t been washed in forever. 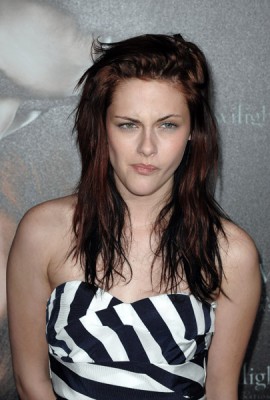 Those are my big three. Do you have any celebrities you can’t stand? Or do you salivate at the sight of any of them? The big thing for me (I think) is that I don’t watch much TV and am particularly unimpressed by stardom. Or maybe it’s because I live near Hollywood – the land of the fruits, nuts, and celebrity weirdos.

10 Replies to “Can I Have Your Autograph?”