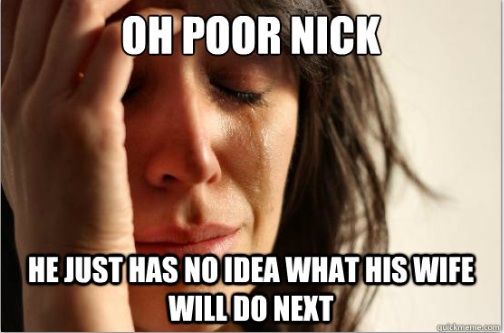 Special thanks to my friend Jeremy for this one; my husband does cry as much as this lady does too, as he laments over what I will do next…

I am in no way attempting to wage any mom-dad-husband-wife-bloggie wars here. In fact, I don’t really even know much about the blog that inspired this post: The Daddy Files. It would be terribly unfair for me to take a blog of his and pick it apart without knowing much about him, his intentions, and his blogging or writing style. So I won’t.

However someone shared with me his post today and – much like he preambles the man-pantie post of misogyny and insecurity with – I thought it my moral duty to at least address an important issue in the mom-dad-husband-wife blogging world: sexism.

Like I said, I find it terribly unfair for a blogger to take a blog or blogger s/he is unfamiliar with and pick everything apart (I’m looking at you, Daddy Files). But I would like to pay attention to one thing mentioned (perhaps in jest) when he took to task a fellow mom-blogger’s recent post over at Scary Mommy. Her’s was titled “10 Reasons Your Husband Is Just Another Child” and his response was titled “10 Reasons I Feel Bad for Your Husband.” You faithful blog followers are intelligent enough to assume where things went in the latter.

In the beginning, he says: “…all the man/dad bashing is so fashionable lately that letting it go unchecked seemed borderline irresponsible, so once again the dad blogosphere finds itself defending ourselves against idiotic, sexist and unfunny crap that litters the Internet.”

Woah there, sparky. Let’s settle down and not get our balls so twisted. There is a stark difference between making jokes, poking fun, or making light of the truth; and, acting idiotic and sexist.

I have posted many blogs about my husband. Some referred to them as “over the top;” others suggested that I was intentionally trying to emasculate him so as to assert control over him. One time my mother in law called my husband and asked if we were getting a divorce. I’ve poked fun at my husband, and all husbands – I’ve called men pigs (which many are); I’ve called him insensitive and misogynistic (which he is); and I’ve discussed all the horrific nuances of cleaning stubble out of a sink, crumbs off the kitchen counter, and urine off the back of the toilet. 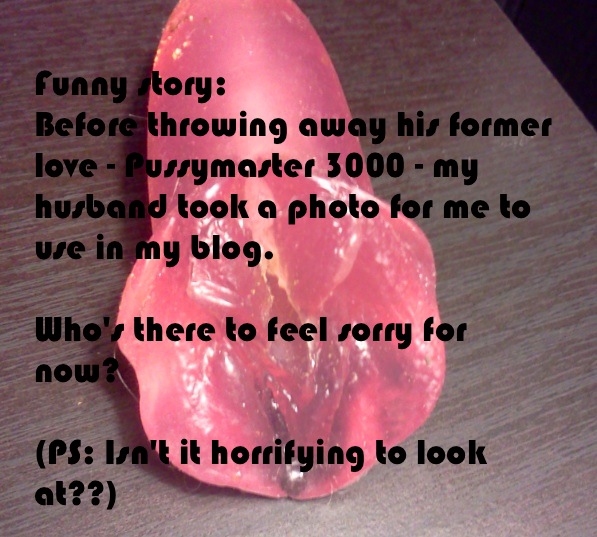 In response to these types of blogs, I get a wide range of responses, many of which are clearly penned by insecure men, unable to take jokes because their man-panties are so wedged up their assholes they can taste the fabric. Just a few days ago, some unbelievably pig-headed tightwad commented on an old blog of mine with the following: “Wow, must have been a heavy-flow day for you huh? Get your tampon out of your asshole.”

The whole point, here, is that there are good things and bad things about living with a partner of the opposite sex. Even of the same sex. As for living with a man, it’s urine on the back of the toilet, too many ball scratches to make anyone comfortable, acting unappreciative when appreciation is greatly needed, gas at inopportune times and in a way that is completely irrespective to other people’s sensibilities (would an “excuse me” fucking kill you, Methane Man?), and bachelor-type behavior even when bachelorhood has been over for decades.

The only thing idiotic and sexist is expecting us to stay quiet about it. To omit (thereby lie) and act as though men are pristine gods, whose glistening ball sweat smells like roses and whose shit-stained underpants are yummy enough to roast up and serve with a side of asiago cheese bread, is just ludicrous. On the flip side, if my husband had a blog in which its focus was to talk about marriage and parenting, I would fully expect him to write about my period stains and the fact that this evening I flashed and jiggled my boobs for the complete strangers driving past our bedroom window, in the apartment parking lot (to be fair, I didn’t realize people would drive by as I joked about changing my clothes in front of an open window). It’s honesty. It’s reality. And it’s fucking hilarious.

It also reeks of something terribly narcissistic to just assume that everyone wants the same thing. Perhaps the mom-blogger that wrote that article about husbands being another child (which, case in point fact: many are) has a husband who can laugh a little at his own childish behavior, admit his faults as a human being, and fucking move on. Not everyone thinks the same, lives the same, laughs the same, loves the same, and expects the same out of a relationship. It doesn’t always have to turn into a reason to backlash with just as much sexism and misogyny as happened in the Dark Ages.

Unless, of course, the man who lashes out at such differences in experience wants to be a permanent Mr. Man-Panties. We all have at least one of these in our lives – a man that cannot take a joke; who thinks his bullshit is lined with 14-karat gold. I get comments from them all the time; the best was when a man told me I was “the most miserable cunt on the planet who just needs to die now” (that gem was for saying that women shouldn’t feel obligated to clean the house to a daily sparkle if they have physical limitations). There is a female equivalent, I’m sure. She probably gets uptight when people say “TMI” to her expression of cramps; or when people make jokes about living with a woman (of which there are many).

The point is this: I think as bloggers; but not just as bloggers, but as human beings, and as citizens of the 21st century – a time when we have a synthesis of traditional roles with a more liberal playing field when it comes to women and men having an equal voice – it’s time to lighten the fuck up. Can it with the “how sexist”s and “your poor husband/wife”s (unless, of course, there is some truly backwoods shit going on). Maybe instead of lashing out because a woman says that men act like children by leaving their leopard printed thongs on the floor in the bathroom, everybody should just chill the fuck out and retaliate with some kind-hearted jokes of their own.

And of course admit that your thong could be picked up, or the piss should be wiped off the side of the toilet. I’ll be the first to say that describing my daily period flow to my husband is about as disgusting as his eating an entire brick of cheese, followed by a King Sized Hershey bar is irresponsible. These things are funny, not idiotic. They’re honest, not a soap opera. Reality, not sexism. 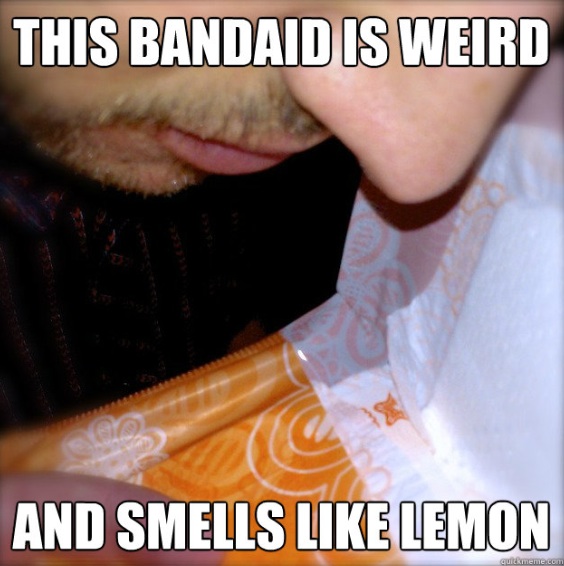 Yes, that is my husband … another thing he did for my blog. You can make your own meme of Maxi Pad Man at http://www.quickmeme.com/meme/3st15a/