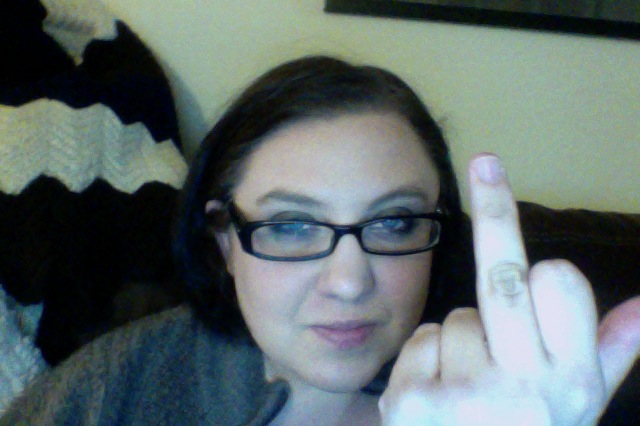 Today I feel differently, though. Today I want to post a flipping-the-middle-finger-photo. Everywhere. At everyone that crosses my path. I’m crabby and ready to tell the whole world to fuck off – so why not?

I’m having a dream that I’m staring at the sun. I wake up. No, no sun – just a light turned on in my face so that the kid can ask me if she can make herself oatmeal for breakfast. She likes to make breakfast, and she really likes to make oatmeal; so why not?

I’ll tell you why not: because 10 minutes later she came into my bedroom saying that she had put too much water into the oatmeal and made it look like puke. She can’t bear the thought of eating oatmeal that looks like vomit. It may very well smell like vomit too – I haven’t even gotten out of bed yet, so what the fuck do I know about what she’s done to it?

Pookie: “Do we have any more oatmeal?”

Me: “No, honey – that was the last one. Why not have a banana and yogurt instead?”

Pookie: “Because I wanted oatmeal!! My life is ruined – ahhhh!!!”

And then she threw herself on my bed and cried for thirty minutes.

Time to start seven loads of laundry. I skipped doing laundry last week because my aunt and uncle were in town from Chicago, and boy was that a fucking mistake (the skipping the laundry part).

No response from my husband. My dad has made another request – can I come over after lunch and go shopping with him for a new dryer at Sears, he wants to know. I have nothing else to do today, he says. Sure. I’ll just wave my magic wand and get homeschooling done; the laundry finished; the house picked up; your goddamned cookies baked; and your PowerPoint tweaked … and have time to shower too in time to get to your church thing tonight … yeah, I’ll wave my magic wand because I have nothing else to do, so I can go dryer shopping with you today. No problem.

I send my husband an email.

My husband calls. He claims to have received none of my texts. I assume now he has me blocked from receiving text messages. Maybe phone calls too. He can always get the carpool lady’s text messages about wanting to work late, how come he never gets mine?

He says he’ll call the car pool lady about leaving early. Bitch better pay back for all the times he’s stayed late to accommodate her demanding job (pretty much every day since their carpool began).

Poor Nick: “What are you doing?”

Poor Nick: “You haven’t gotten all the laundry done?”

Fire begins to flame out of my nostrils.

Me: “Did you read my blog this morning? It was funny, huh?”

Me: “Don’t even go there, motherfucker. I was making fun of myself, I didn’t give anyone details about blow jobs or positions or the size of your balls or anything. It was fucking hilarious.”

No response from husband. Laundry isn’t done. I’m starting to be able to smell my pits through my sweatshirt. I’m hungry now. Wish I had eaten that vomit oatmeal this morning. Time to make lunch too, but alas we have no food because I also didn’t go grocery shopping last week.

Flames start to shoot out of my nose and my ears.

We go to In ‘N’ Out. It’s acceptable to go to In ‘N’ Out in pajamas if you are just going through the drive thru. I order the grilled cheese sandwiches, plain; and drinks. I drive home. On the way in a neighbor in my broke-down-ghetto-ass-drug-filled-apartment-complex looks at us walking in, still in lounge-y pajamas, and says “wow, takes you a while to get moving, huh?”

My head would have burst into flames had I not been cold from sitting in the air conditioned car.

Fuck everything. I’ve taken a shower and gotten dressed, which only gave me time to think and grow angrier and angrier. The laundry will be done in about five minutes. I ain’t baking shit – I’m going to the bakery and buying a box of whatever day old shit they have and sending my dad the bill. Fuck this. Fuck picking up the apartment today too: I’m going to fucking Michaels and buying new vase fillers, and fucking Home Depot to get a new bonsai and a cabinet for my art supplies.

This day sucks, and it’s only going to get suckier as it goes on. May as well say fuck it and do some stuff I actually want to do with my middle finger waving everywhere.

Flames have shot out of my nose and my ears, and it was a close call with my head bursting into flames out of sheer anger already. If my crabbiness increases at a rate of 27% per hour, at what point will I be breathing fire? That would be cool if it happened at the church thing. Just think of the pandemonium that would cause…

4 Replies to “If My Crabbiness Increases At a Rate of 27% Per Hour, At What Point Will I Be Breathing Fire?”