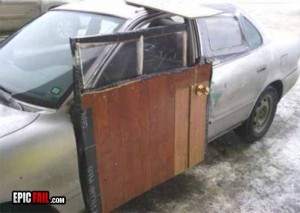 Be it a carpool for work, extra-curriculars with the kids, vacations, school – you name it, there are a lot of reasons people carpool. If everyone in the carpool is on the same page, it’s great. But for every carpooling success story out there on the Internet, there are about ten times that in horror stories. It’s as if these people are actually hellbent on destroying their carpool from the start; or, they just don’t care about anyone but themselves.

I’ve mentioned a few times, both in recent blog posts and on my blog’s Facebook page, that my husband has been in a carpool from hell for a little over a month now. What made the situation that much worse was that my husband just thought it was the next best thing to my vagina and a bowl of pistachio-flavored ice cream. The woman he was carpooling with was in the exact, same sector of the film industry as him, so he just lapped that shit up like a lost puppy dog wandering the streets in search of anything. I imagine that every day they sat there and just blew their editorial, industry bullshit up each other’s assholes the whole way to and from work (well, that is when they actually carpooled on the days they were supposed to carpool). I fully believe at this point that were that woman single, I would have had something to worry about. Maybe I still did (or do). That is the depth to which Poor Nick seemed to be taking this relationship, and what he was willing to sacrifice to maintain it. In the end, the carpool is no more, though. Too many things stacked up against their woe-begotten arrangement, which has led me to throw together this little tutorial on how to destroy your own carpool.

Because that bitch didn’t just destroy their carpool. She dropped a fucking nuclear bomb on it.

Let’s go step by step on how you – too – can lay waste to your own carpools. We’ll use film industry ass can lady as our tutor.

Always Show Up Late In the First Leg Of Your Carpool

Doesn’t matter what you are carpooling to, if you want to fuck your carpool up worse than you fucked up your marriage, just always show up late in the first leg of your carpool. By “first leg,” I mean the “to” part; so if you are driving to work (for example), I mean driving there.

Never let the other person or people know you are running late either. When you get there twenty minutes late, act as if there is nothing wrong with you being late.

Film industry ass can lady was the best at doing this. Once I had to use my husband’s car when mine was in the shop and she knew we would be sitting there waiting – half asleep and waiting to go back home – and that bitch showed up twenty-five fucking minutes late. To make matters worse, she was disheveled and her kid was in the car with her. Which leads me to our next lesson in destroying your carpool …

Expect Your Carpool Mates To Run Your Personal Errands

I always thought that no matter what a carpool was for, it was totally tacky to run errands and shit while your carpool mates are in the car. Say you are carpooling a group of kids and their moms to a soccer game. Would you stop at Ralphs and pick up some bread on your way there, then pick up your dry cleaning too (I mean, it is on the way..)? Fuck no, you wouldn’t run your bullshit errands while you are carpooling. It’s rude and reeks of the notion that others have nothing better to do with their time but sit in the fucking car for no reason.

So film industry ass can cunt lady would sometimes have my husband go along with to drop her kid off at school. Happy fucking family that they were: dropping the daughter off to preschool and waving good-bye on their way to pursue their illustrious careers in film industry ass can cunting. I asked my husband where the fuck this lady’s husband was, to which I got no response.

Indeed. Run your fucking errands into the motherfucking ground if you want to destroy your carpool.

Never Do What You Say You Are Going To Do

This must be a film industry thing, because my husband often does not do what he says he is going to do either. I mean with regards to me.

End the Carpool Day By Expecting Everyone To Wait For You

At the end of a long day, I think the last thing I ever want to do is sit around and wait for people. At the end of a long vacation, the last thing I want to do is be delayed in getting back to my regular routine too. I could go on with every scenario in which one might carpool; you faithful blog followers get the point. The real surefire way to destroy your carpool like film industry ass can bitch cunt lady did is to always make people wait for you at the end of the day.

This bitch was so ballsy about it. She’d just show up forty-five minutes after they were supposed to leave, and act like there was nothing wrong with it. Once it was an hour and a half. The worst was when she kept telling my husband to wait for her until it ended up being two hours after the work day ended. He got home that night at 10:15. Family? Household responsibilities? No such thing can exist or be considered for anyone in the carpool, if you want to destroy your carpool.

In the end, the real kicker was that driving to and from this woman’s work in city traffic from my husband’s work, as well as to and from her home since she could never make it down fairly for him, added our gas bill up to such a point that he spent more money on gas in the month he carpooled than in the months he drove himself. Between the extra driving, and the many times she just never showed up, this was the end of this cuntly behavior affecting our lives.

He has yet to tell her she destroyed the carpool. They are off carpool this week and he is probably coming up with ways to justify continuing to do the carpool anyway. I’m sure he’ll blame me, like he always does. Not to emasculate my husband, but he doesn’t really seem to even want to have the cajones to be honest with anyone. But me, of course. If it were me he would have told me I was a film industry ass can bitch cunt face and that the carpool was off on the second day (which is another blog post altogether).

If you want to destroy your carpool, I highly suggest you follow that broad’s behavior, with her nappy ass hair and her disrespect for anyone’s priorities other than hers.