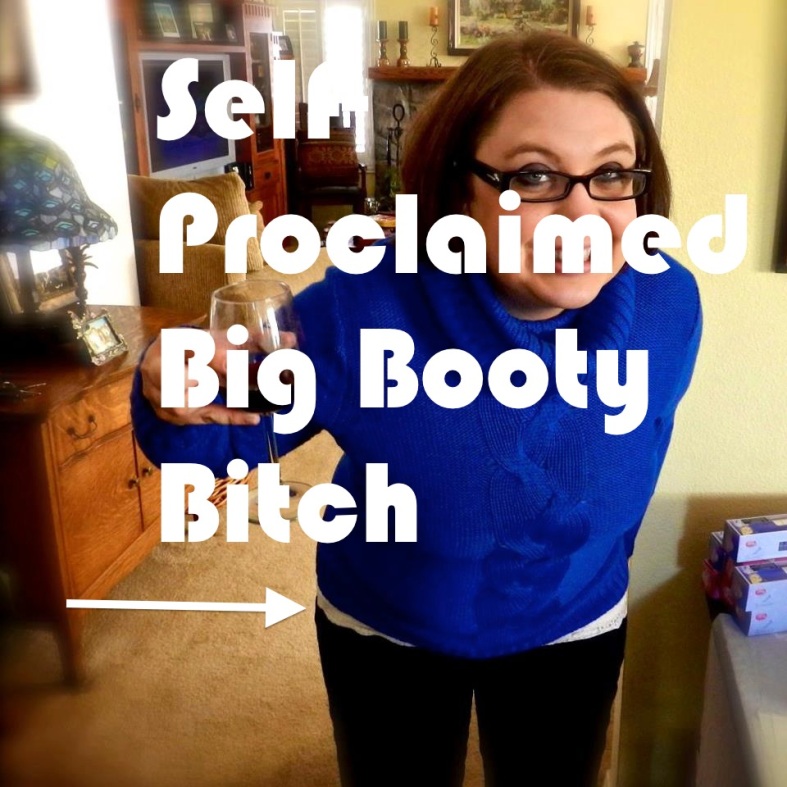 So on Saturday evening we were celebrating my birthday, a little early. I turn 31 on April 15th, but my dad is having hip replacement surgery next Friday and I’ll be spending most of April taking care of him. All we have is each other here, so we celebrated with a little Game Night with cake this past weekend. There were maybe 15 people there, including my mom.

I was walking into the kitchen to get myself a drink and my mom walked over to me.

“So how much weight have you lost?”

“Oh, well aren’t you just better than the rest of us big girls…”

First, thank you mom for implying that I am one of you “big girls.” And, to further imply that you think I used to be grossly overweight. To be fair, I weigh considerably less than my mother does. I may not be model-stick-thin, but I’m certainly no candidate for an obesity weight study either. My mom is a big booty bitch, and not in the way I’d use it as a term of endearment like with most girls deserved of the title. A Big Booty Bitch could be someone heavier; someone with just a big booty; or someone stick thin with a big heart. By contrast, my mom is overweight, like most mothers. She’s had periods where she was a lot heavier; and periods where she was a lot thinner. Like most women. She’s never been into dieting or exercising, though, so I’m not too sure why she gives so much of a shit about scales and weight tracking. Unless, of course, it’s just a facade to put people down and make herself feel better about her own physical appearance. I assume this is the case.

I didn’t give it too much of a thought until I read this article an HuffPost’s Facebook page today. It was about a poll they had done, inquiring whether or not weight gain was a justifiable excuse to divorce or commit adultery. I won’t go into the details of the article – you can gladly read it yourself if you are interested; I will not even respond to the opinion of the author (who I largely agreed with, actually).

I want to talk about the fact that we – as a culture – are even doing polls and having conversations about this.

One thing the article discussed was the double standard. If a man packs on pounds – for whatever reason – a woman should understand, and try to inspire him to get healthier. If a woman becomes a Big Booty Bitch from a weight perspective, we start discussing whether or not a man should feel justified to cheat on her, or divorce her big booty butt.

Perhaps the reason why we don’t even suggest this when a man’s previously firm areas begin to jiggle is because the Big Booty Bitches respect the sanctity of marriage, rather than a person’s physical appearance. I mean, I would never consider cheating on my husband because he packed on a few pounds. I further would probably only talk to him about it if it became a health concern; and even then, I would try to influence him with the meals I cook and the actions I, myself, take, rather than inflict the emotional harm that a conversation beginning with “hey, you’re kind of becoming a fat fuck…” can cause.

Because of the sanctity of marriage, it doesn’t even enter my mind to consider that it might be justifiable to even discuss options like divorce or cheating. Your vows say “…for better, or for worse…” for a reason.

(In Ways Other Than Staying Faithful)

Faithful is more than just not cheating. It’s not considering leaving or straying when the going gets tough.

To suggest that we should consider the acceptability (or lack thereof) for divorce or cheating because a person gains weight implies a lot. One is that all people who rapidly gain weight are doing so because they are lazy shits that do nothing but watch TV. This is just not the case – there can be many, many health reasons (physical, medicinal, and mental) why people put on weight. Two is that if a person’s physical appearance changes in any way, that now we should talk about whether or not it’s OK to abandon ship. This would be to say that if a man gets ball cancer, and a woman thinks a man with only one ball is unattractive sexually, she would be justified in divorcing him. Big Booty Bitches would never consider this, though, because sexuality and physical appearance is about a microcosm of what makes up a marriage and a happy life together.

As was the case with the “…for better, or for worse…” there was also a vow “…in sickness, and in health…”

Big Booty Bitches Do Not Find Divorce or Infidelity an Option

When I walked down the aisle, I didn’t think to myself “well, I can always get divorced.” When my husband started acting like a jerk to me because he wanted me to give up my Ph.D. program, and stay in California, I didn’t say to myself “I’ll just go fuck someone else.” That isn’t the way marriage works.

If every time something didn’t go our way, we ran out and screwed our milk man or filed for divorce, we’d have a high divorce rate in this country. Oh wait, we do. Is it because things genuinely don’t work out? Or is it because people consider divorce and infidelity an option from the get go? While there are many instances in which a couple truly tries and tries, or one person has issues that make trying an impossibility, and it doesn’t work; there are also so many people in this country right now who will abandon ship for any old reason. I know a lot of them.

For myself, I don’t believe that divorce is an option, nor infidelity. Maybe it’s the Catholic in me, that has some backwards religious views engrained into my soul. Or maybe it’s because I take a commitment seriously, and don’t just bail when the going gets tough.

I took my vows seriously, and the fact that our culture has become so superficial and material so as to even enter into this discussion about weight gain sickens me to my very core. It makes me want to spew vomit everywhere, and on everyone. Marriage and relationships are about so much more than sex and being perfect for each other. In fact, I always thought they were about the ability to be imperfect and still be loved. What a crazy world we live in where this no longer seems to be the case.

7 thoughts on “Waltz of the Big Booty Bitches”