So living and being married to someone that works in the film industry is …an interesting place to be. There are all these subtle nuances I am supposed to adhere to. To respect.

In other words: to tolerate.

I can appreciate that my husband is proud of the work he does. And I can appreciate being a lover of an aesthetic art such as film. I myself swoon often over the philosophical writings of the greats I adored in graduate school. And I do love the acquisition of a new book. I get it – he takes pride in his interests.

I think my husband goes way over the line sometimes to a point that is just absurd, though. 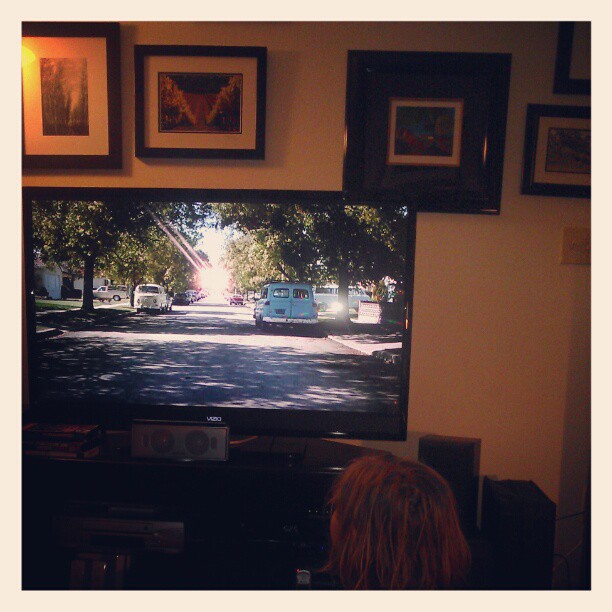 The first movie I went to see with my husband was The Reader. Great film, and based on one of my all-time favorite works of fiction. While we were there, I bought myself a Diet Coke. A typical purchase for a movie outing, yes; what wasn’t typical was that Nick whisper-yelled at me during the movie because my straw squeaked when I took a sip of my soda.

Are you all with me on this? My straw made the slightest squeak – of all the noises in the movie theater outside of the film, itself – and I got whisper-yelled at.

Watching movies at home is an entirely different ballgame, though. That’s my husband’s time to shine, and by that I mean talk through the entire goddamned thing. I get narration: “deep in the forest lived a town of little blue men.” I get commentary: “you know what’s missing here is the backstory to that photograph…” I get voiceover: “it was the best of times, it was the worst of times.” And I constantly get the story about the guy that knew the guy that worked with the girl that was friends with the friend of my husband’s boss, who knew a guy that worked on that film. It never ends. Ever.

As with all things, love is a two-way engagement. If I’m going to listen to my husband’s incessant talking about all this film stuff, he should be willing to listen to me talk about a book I read, or engage in – gasp – an actual conversation with me about it. That’s sadly not the case, though. I think we’re too busy watching crap movies, which leads me to #2.

We have a lot of movies and of those movies, I think close to half are total crap. I cannot tell you all how many times my husband has said a movie is “good” just because it grossed a lot of money or was popular with a lot of people. Even having not seen it. Even not really liking it himself.

So we own a lot of crap movies. Some of them my husband has never even watched – that’s how much they are crap. When I ask why he bought it he says “it did really well in theaters, seemed like it was a good movie to own.” Huh? And I cannot even count at this point how many movies are such garbage that he bought them, watched them once, then never watched them again knowing they are crap, but still argued they are good because of the fanfare they received. He calls those ones “an acquired taste.”

Sure, I have a very picky taste in movies. I don’t enjoy a lot that truly are good. I’m not talking about those here, though – I’m talking about movies that objectively speaking belong in the trash can.

We have seen a lot of bad movies in the theaters and on Netflix too, simply because someone at my husband’s work said we just had to see it. One I can think of off the top of my head was The Trip. It was about two and a half hours of listening to these two guys’ supposedly-witty back-patting, while they shoved food down their throats, that was no more funny than it was insightful. You just have to watch it, it’s brilliant. Similarly, there have been countless times that we have planned on going to see a movie and never gone because my husband heard or read that it wasn’t good. But it isn’t just taking people’s advice, it’s that he actually takes the position that the movie wasn’t good. “That’s a bad movie” he’ll say, and then something I’ve been waiting to see for months is off the list for date night. How the fuck do you know it’s a good or bad movie if you don’t watch it yourself?

I get really upset when I see that my husband has rated something on Netflix way lower than he should have. The only thing that is worse than that (which he does as well) is after I rate a movie, he’ll go in later and re-rate it to what he thinks it should be rated at.

So the way I see it: a five star rating system is across the board for movies, music, hotels, restaurants, and so on. That’s why one-stop-shop sites like Yelp exist to begin with – so you can rate everything in one place, and know what the ratings mean. How can a person be expected to know that a a certain star is acceptable for movies, but not hotels? And definitely not restaurants, but it’s OK with music. That doesn’t make any sense at all – a star is a star and it means the same thing across the board. Not for my husband, though. He will really enjoy a movie and still give it only three stars. He does it all the time – he gave Sleepless in Seattle (an all-time classic film) only three stars and then argued that this was a great movie, deserved of only three stars. Huh? Would you eat at a restaurant that gets only three stars on Yelp? Would you stay at a hotel that has only three stars on Hotels.com? Would you buy a motherfucking book that you were unsure of that only gets three stars on Amazon? No. No you wouldn’t.

As with any avid movie collectors, we have a lot of movies. I’d say we’re getting close to about 600, but if you take out all the crap movies maybe it’s closer to 300 or 400 quality films. We have them in a DVD organizer – it’s a spinning thing that sits in our living room as the biggest and most ugly eyesore you could imagine.

My husband was tasked with organizing the movies and rather than ask me what would be easy for me – I being a novice to all-things-film – he just assumed that his psychotic organization from his single days would be best. You’re probably thinking to yourselves alphabetic or by genre for sure, as if organizing 600 DVDs by genre isn’t abnormal of its own right. (If it were just me, we’d just throw them all in there in no particular order.) This is coming from the guy who saw I added a lot of films to the Instant Que on Netflix over the weekend, though; so promptly spent his day yesterday reorganizing the list by genre on our Netflix account. Anyone who organized their Netflix account by genre is not going to merely put their own DVD collection by something logically simple, such as that.

Nope. They are organized by production studio. As in, the company that made the film. The number of hours I have spent looking for a particular movie because I couldn’t simply go to the section for movies that start with an A is staggering.

So what started as a hobby has turned into a profession, sure. Do what you love, and all that crap. But some of this extra-curricular shit has got to be a little out there. When I was in high school I worked at Wendy’s, and when I got home the Burger Bitch didn’t hang up her apron. I told stories from work. I gave anecdotes from the burger station. I made complaints about the customers. It’s all I ever talked about, until eventually no one wanted to talk to me anymore. You’ve got to have a separation between your job and your home life. If movies are your passion, fine; but at least take a break from the ins-and-outs of the industry long enough to just enjoy life once in a while too. Even if enjoying life is just watching a movie without all the back story and the strict organization and the attention to reviews. Just watching.