Marriage sucks. I mean it’s got its perks (I have yet to find many). But it’s hard. My grandmother – married for 63 years before my grandfather passed away, just this February – once said to me “you aren’t doing marriage right if it’s easy.” True ‘dat, Grandma. True ‘dat.

When I got up this morning, I came to a bit of an epiphany. After all this gay marriage, equality talk – people turning their Facebook profile photos red, and rallying with the rainbow flags and such – I realized something rather striking: I don’t really understand why The Gays want to get married anyway.

I also don’t really get why The Straights are so opposed.

Think about it in terms of my marriage. Every day I get up in the morning and see that my husband has left for work. There was no kiss good-bye. There was no subtle waking me up to say “I love you” one more time, before dragging himself to work – like they do in the movies. My husband doesn’t have to be dragged to work; he has to be dragged home.

I get up and make breakfast. I make cereal for Pookies, a banana for me, and I see that in the sink my husband has piled dishes from his own breakfast. Rather than place them in there uniformly, or – dare I suggest – on the counter, he’s submersed them in a bowl of rancid, cold water that was soaking the stuck-on food from cooking dinner the night before. I spend a while getting the contents out of the puke water, with my bare hands, before losing my appetite.

I go to the bathroom and fall in the toilet. Still half asleep, I haven’t noticed the toilet seat was left up. I shower. While in the shower, I get soap in my eyes and the only close towel is my husband’s. I use it to rub my eyes, praying this isn’t the place he dried his balls with this morning. He’s been scratching them a lot lately. I clean tiny beard hairs off the sink and toothpaste off the counter.

Later in the day, I’m vacuuming. I get to our bedroom and on the floor are my husband’s clean socks. Rolled up. Sitting next to the dresser. Where his sock drawer is. I bend over to pick them up and put them away and a twinge hits my lower back, telling me it’s time to stop.

But I don’t. I have to make dinner, and to make the dinner I prepped yesterday, I have to get the BBQ going. On Sunday I asked my husband to clean the grill. He watched The Walking Dead for a few hours, then read about the Dodgers on his computer for a while instead. On Monday I asked him if he could please do it and he promised he would. On Tuesday at 11 o’clock in the evening, while getting ready for bed, he still had not done it. 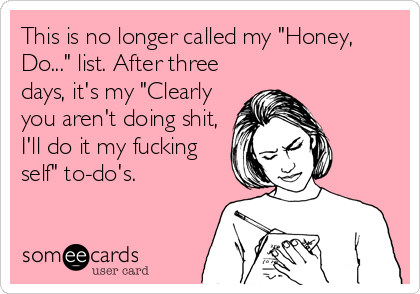 At 6:00 my husband hits quitting time. At 6:30 he’s still at work: solving problems, getting caught up, finishing things ahead of schedule, answering superfluous questions, and avoiding coming home. Dreading the minute I call to ask where the shit he is.

On his way home, his former carpool lady calls. Can they start the carpool again? It was so nice to have someone to talk to on that long, 50-mile drive, he thinks. “Sorry – my wife won’t allow it … you got me home late too many times in a row,” he says.

Poor Nick gets home. Around 8:30. He’s been gone since 7:30 in the morning. At this point I’m past being tipsy from wine o’clock and onto having a headache from it (I’m a lightweight). There will be no sexy time tonight. I bitch about my period coming soon. He prays to God it’s my period and not early symptoms of pregnancy.

Poor Nick is resigned to this. I’ve made chicken and rice. Again. For the fourth time this week. Poor Nick chokes it down with something of a smile. I complain that he never tells me my cooking is good, my hair is pretty, my ass isn’t fat. He goes to put on pajamas and sees I didn’t make the bed. I never make the bed, and this annoys him.

Now you all may be thinking this is a pretty miserable situation, and you would be right to think so. There are of course the good times, and the reasons for being married, together forever. But there is all this other stuff that makes so many people say “marriage is the hardest thing you will ever do.”

So why in God’s name would The Gays want this?

If The Straights are so against The Gays; if they really think it’s that gay sex is wrong, or it says it’s wrong in the Bible or whatever, why not LET them have all this bliss? All the hairs on the counter, the numb complacency, the wine o’clock headaches, and the nightly fight for the covers? This misery, this daily difficulty – it would serve them right. Right?

On a serious note, I think I know the reason why The Gays want to get married, legally. Because this isn’t an issue of The Gays or The Straights, or what your religion says, or what mine says; but that of human rights. It isn’t really gay marriage anymore than it is straight marriage, just like they aren’t any more The Gays as we are The Straights. We are all human beings and our sexuality, just like our race, creed, religion, or underwear color preference has nothing to do with being treated as such.

As a Catholic, with many family and friends that are Catholic, I struggle with this and many other political issues. Fortunately, with my family and friends, we are able to disagree and still maintain our close ties; which is why I am fine with saying that I am in full support of anyone’s right to marry, regardless of their sexuality. It’s just that when I think about it, I remember that my religion is not the religion of everyone – so why should I have the right to tell people that may not believe the same as I do what they should do? And that there are a lot of things the Bible says to avoid that people don’t – like eating shellfish. Who still abstains from shrimp, which the Old Testament unambiguously states is a punishable sin? (Get it: times change). More than any of that, as a Catholic and a believer in my faith, I believe that Jesus preached love. That’s it. Love and equality. Maybe I’ll burn in hell for being in support of gay marriage; maybe one day I’ll lose someone important to me because of our opinions.

But I think that when push comes to shove, my belief in love above all will prevail. Isn’t that what Jesus taught anyway?