Seriously. Who over the age of five calls something an ‘inside joke?’ I’ll tell you who:

I am sure there are more, and if you refer to things as an ‘inside joke,’ please excuse my bluntness when I say: it’s about time you shut the fuck up.

When my husband and I first started dating, we went on this double-date kind of night with the friend that set us up and another one of my friends, who happens to be gay. Well the friend that set us up is gay now too, so I guess it worked out for the both of them; but at the time it was really just “going out with friends.” Tangent aside, we were in Nick’s car and he saw a bunch of people walking across the cross walk and said “wow, there’s more Crocs in that group than at a Vampire Weekend concert.” When we all turned to him and said “huh?!” he said “oh … inside joke.”

Stick your motherfucking inside joke up your ass, future husband. That’s what I should have said; instead I went on along this eloquent diatribe about how ridiculous it is to reference in inside joke when no one else on the inside is around to get it. 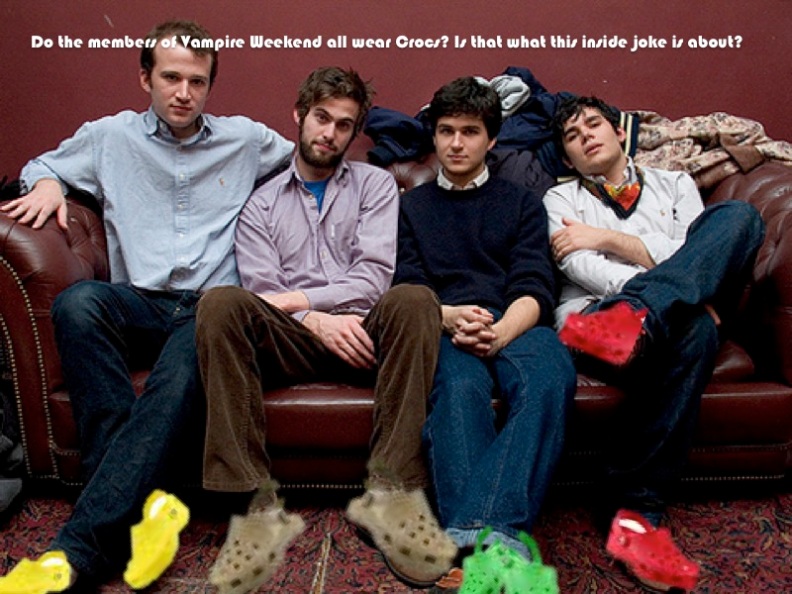 And here we see the first reason why inside jokers need to shut the fuck up, on this fine STFU Friday:

#1 Inside jokes are for motherfucking elitists

This is something that just irks me to no end: that I may or may not be “cool” enough to be included in your stupid bullshit inside joke. This then leads to the possibility that said inside joke involves something I may or may not be involved in, which means that I may be excluded for an intentional reason. So that means that it may actually be making fun of me, which is the fundamental reason why inside jokes are elitist and bullshit and should be nuked off the planet by that North Korean crazy guy.

Are you with me?

So the point is that an inside joke implies that it’s on a need-to-know basis, and if you don’t get it, you don’t need to know. When my future husband made that comment about Crocs at a Vampire Weekend concert, I promptly slipped the mix cd I had made for him with Vampire Weekend on it back into my purse. How did I know he wasn’t making fun of me? I wasn’t inside the joke.

And hipsters need to shut the fuck up. Seriously. Take your new age, tofu-grilling, tight green pant-wearing, Back to the Future sunglasses-donning, Pitchfork-listening, inside joke-making asses and shut the fuck up.

#3 Inside jokes are for douches

There have been a few times in recent memory when someone said it was an “inside joke” and when everyone acted like they didn’t get it, the person said something really douchie like “oh, you wouldn’t get it anyway.”

Really. I wouldn’t get it anyway, you say. It’s funny that you say I wouldn’t “get it” when I went to graduate school, and you were educated by an orange peel and a mismatched pair of socks.

This is a classic douche move – to put others down and keep them in a position of not knowing what the shit is going on, just to make themselves feel superior. And the inside joke is the perfect way to do it. If others don’t get it, but you clearly realize the sheer hilarity of your stupid shit joke; well then don’t you feel like the epitome of humor, while everyone else is just too daft and stupid to understand the nuances of being a humorist (in your mind).

Chances are if it’s too cool to share, it’s too stupid to be funny. Shut the fuck up, douchecake.

And this leads to the last group of people that I generally consider to be those stupid fuckers (no pun intended) that make inside jokes. Dumb morons. People that make inside jokes because were they to make actual real, “external” jokes, no one would laugh. Or get it, but not in a “we’re all too stupid to get it” way. In a “this makes no sense, shut the fuck up” way. Motherfucking morons with your stupid motherfucking jokes, that are made simply in an effort to protect your sheer stupidity: shut the fuck up.

As you can see, I have strong feelings about inside jokes. I just think they’re another way for people to make themselves feel above others. I’m not even sure how I got onto this little tangent this evening, actually. It just popped into my head like a pair of Crocs at a Vampire Weekend concert. Or like the many times In A Gadda Da Vida pops into my head for no reason at all, other than to annoy me.

Oh, I’m sorry to bring up that In A Gadda Da Vida thing. That was an inside joke. Now I’m the one who needs to shut the fuck up for this most glorious of Shut the Fuck Up Fridays.

6 Replies to “STFU Fridays: Inside Jokes”