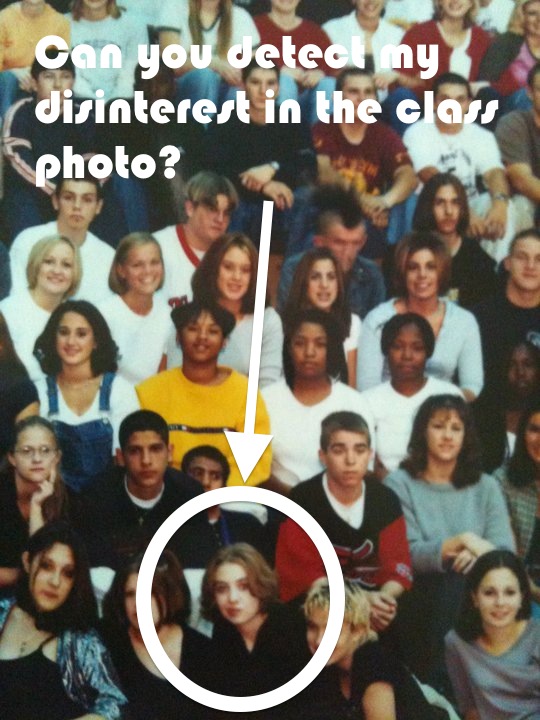 Are you in your 30s? I am. I mean I’m really 28. Again. But according to my driver’s license I am officially a 30-something. Screw you, DMV.

In any event, I am still really good friends with a lot of my friends from high school. And as the years have gone on, people I knew only marginally while wandering the halls of those four miserable years have become better friends now as well. This summer I’m throwing a baby shower for one of these people while I’m in the Midwest, and as I combined her and her boyfriend’s guest lists today to send out a save the date, I realized that her shower could also be known as “high school reunion 2013.” In some respects, at least.

That’s the great thing about these big life events – they give us an opportunity to catch up with the people that are so much a part of who we are. And they give us time to reflect on where we’ve been, where we’re going, blaa blaabity blaa. For me, it’s made me relive all of my high school memories – the good, the bad, the pot-induced; and more than anything, come to a startling epiphany amidst it all: that our 30s are still very much like high school.

In high school, everyone was loud. People yelled down the halls. Girls screamed at their boyfriends in that oh-so-pathetic “help me” way when they needed their lockers opened or their bags carried. And don’t get me started on the ridiculous cheers and chants we were all required to do at our mandatory school spirit rallies. (How in the hell can anyone mandate spirit?)

I always thought that when we got out of high school, shit would quiet down. But it didn’t. College was just as loud, only without the lockers. The workaday world was loud too, only a different type – people yelling at you, phones ringing, and so on. And now our 30s. Our 30s are filled with the permeable screams of children running a muck and the arguments about money/time/priorities/and so on we get into with our spouses.

The noise level has not changed.

That’s another thing I thought would change when we got out of high school. Everyone ate crap at my high school – nachos, pizza, and the always-daring pizza dipped into nacho cheese (puke, I never did that). I don’t want to hear anything about obesity either, because if you are my age you know that we come from a time when kids still actually did things besides sit on their computers.

But I still – for some reason – thought that when we got out of high school those things wouldn’t be appetizing. Suddenly I would be transformed into an adult. I would crave baby arugula and spinach salad with roasted pine nuts, organic heirloom tomatoes and just a hint of basalmic vinegarette. I would look at imitation chicken and squeal with delight. Soda would instantly be disgusting.

It’s quite the contrary, though. Nachos and pizza still sound tasty to me over baby arugula any day. And let me tell you something about balsalmic vinegarette: it tastes like licking the inside of my husband’s asshole. The only reason we say those things are tasty in our 30s is to make us feel better about the fact that we can’t eat nachos and pizza and pizza dipped in nacho cheese all the time without gaining weight anymore.

#3 Clearasil Remains In The Medicine Cabinet

When exactly do breakouts stop? I’m just wondering, because in my 30s I expected to stop getting a huge zit on my forehead before date night. And yet it happens. All the time.

Yesterday I posted about that “Dear Mom On the iPhone” thing that was going around Facebook, which made me think a lot about how judgmental we are in our 30s.

In high school, I could not wait to get out because it meant life would cease to be about worrying constantly what others thought. Anyone that says they weren’t self-conscious in high school is a total jerk, and a liar to boot. There were cliques in high school. We were all trying to find our places in the world, and define ourselves beyond what our parents told us to be. And bullies were everywhere. We didn’t have anti-bully campaigns to protect us, either.

It’s all the same in our 30s, though. Sometimes we’re judging each other for the same things – weight, height, boob size. Other times it’s a little different, like about our parenting style, our lifestyle choices, and whether or not our weddings/bridal showers/baby showers/homes/living situations are ghetto.

Don’t get me wrong. There are definitely ways in which things have changed. For one, it’s no longer a scandal when someone announces they are pregnant. That lasted for a little bit into our 20s and then it became the norm. Now it’s almost scandalous for people to not be having babies. Princess temper tantrums don’t go over too well anymore either, unless you are a bridezilla.

But above and beyond all that change is the sense that nothing ever really will. Maybe it’s because we still feel young – we still feel like teenagers, trying to craft an existence of our own in a world that is terribly confusing and ever-changing. Or perhaps the real truth is that high school was our grand entrance into the real world. That it didn’t happen anytime after high school, but rather while we were there. What a terrifying thought that is.