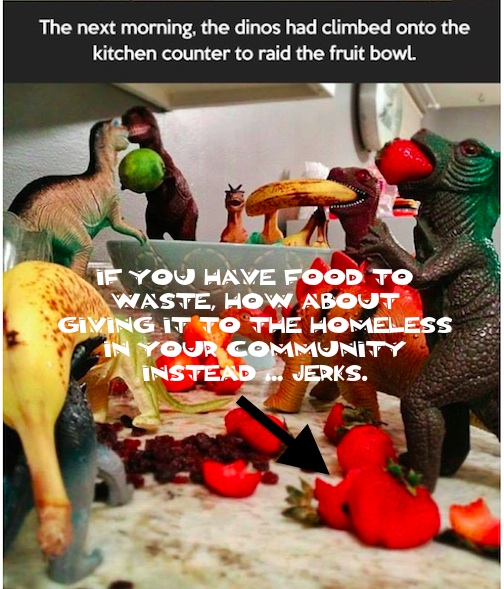 There are a couple of things going around the Facebook these days and I don’t like them. Not one bit.

One is about these parents of boys that make their action figure dinosaurs “get into trouble” every night in the month of November. I’ve had like five friends share it in the last day. Sometimes the dinosaurs just play with the fruit bowl. Whatever, that’s cute. Other times they get into an entire roll of toilet paper in the bathroom, or crack open a bunch of eggs.

The other is about people’s oh so clever Elf on the Shelf ideas for this Christmas. You know, you wake up and the kids find that the elf has gotten into the cookie dough and made a mess in the kitchen. Or he’s holding hands with Barbie in the dream house. Some dumb shit like that.

At that point I start to ask just what in the fuck is going on here.

First and foremost, we’re kind of deviating from the original purpose of these things, especially in the case of the Elf on the Shelf. They didn’t create and market that ugly, horrifying elf just so that people can have some mischievous character running around the house. Making a mess. Upping the ante for the rest of us mediocre parents, so to speak. They marketed it as a way to keep your kids under control in the month before Christmas.

If the elf is dry humping Barbie in the dream house and porking down sausage links while raiding the liquor cabinet… well, just what in the hell does that mean?

Moreover, who with any sense of morality wastes money and food like that? When I saw the photograph of those dinosaur action figures with an entire package of destroyed eggs all around them, I thought – man, that’s like three breakfasts in our house. Sure, a dozen eggs is around $3 – or whatever – but what would a starving family living on the streets, or dying children in the third world, think if they saw that picture? I don’t mean to get all philanthropic up in here, but I’m pretty sure that being so wasteful is why (1) the world is completely falling apart, and (2) people hate Americans so much.

Lastly – and perhaps the most compelling – who the fuck with children has so much time on their hands to do this kind of shit? No seriously. Like… seriously, seriously. I barely have the time to take a shower, let alone figure out ways to make that sneaky elf get into trouble again. From the moment I get up in the morning, until the minute I pass out in a pile of messy hair, unkempt pajamas that I’ve been wearing all day, and my husband’s slobber, I’m taking care of people. I’m cooking. I’m cleaning. I’m taking periodic breaks to dick around on Pinterest or the blog – but you’d better believe I’m doing something else like cooking dinner or vacuuming at the same, exact time. Or answering homeschooling questions. Or wrapping Christmas presents.

What I’m saying here is that there is little time for relaxation. And after kiddie bedtime, I have to … wait for it … fold the laundry and pick up the shit that didn’t get picked up during the day. And do the dishes, because I was so busy helping with math or running around from extra curricular to extra curricular.

Why can’t I be a parent with a lot of time on my hands? A parent that has the time to whip up a batch of cookie dough and then carefully and strategically make a planned mess for the elf on the shelf to be blamed for. Just to clean it up in the morning and come up with another plan for the next night. Every night in the month of December. Or to come up with ideas for my kids’ action dinosaurs or Barbie dolls to get into trouble over. Why can’t I have the time to wrap dolls in toilet paper and smash dinosaurs into a dozen eggs? And then the time to clean it all up the next day?

It sounds a little ridiculous when you put it like that, doesn’t it? Maybe that’s why I don’t have the time, or the money, or the interest really, to be one of these over-the-top parents that just can’t let go and be mediocre like the rest of us.

But is it really mediocrity? Or is it just common sense?

9 Replies to “Why Can’t I Be A Parent With A Lot Of Time On My Hands?”