Those of you that know me, or have been reading this blog for a while, know that I am not a fan of flatus jokes.

You know what I’m talking about. I’m sure you make them all the time. Maybe you post comics on Facebook about blowing them under the covers; or you tell jokes about your husband ripping them in the privacy of an intimate 20-30 person family party.

Then again maybe you are more comfortable with the wind that comes from the assholes of everyone. Perhaps you are like that woman that I saw once – years ago – on Lifetime’s Wife Swap reruns. She would pass her horrifying (and quite frankly excessive for a woman,  in my opinion) gas into empty plastic bottles, then close the bottles to PRESERVE THE SCENT TO EXPOSE TO HER CHILDREN AS A JOKE LATER IN THE DAY.

Yes. You just read what I wrote. Be afraid. Be very, very afraid.

My husband sometimes is the worst because he does not say what all men should say in the presence of a fucking lady, such as myself – “excuse me.” Or even “sorry.” Every once in a while I get up and walk out of the room, screaming as I go like the stark-raving lunatic that I am, something along the lines of: “why don’t you just drop your pants and take a shit in front of me while you’re at it!” Other times I say nothing because I’m fairly certain he would if he thought I wouldn’t mind.

It comes from his dad. Sometimes I think he (my father-in-law) tears the lining of his asshole, he just does it so much and so violently. Violently, like bring in the SWAT guys with the protest beating sticks-violently. Then he’s proud of it. He’ll try and waft it around the room (as if this is even possible) with his hands, then he’ll do it again only that time you think it might be time to call a doctor, or possibly even 9-1-1.

My mother-in-law gets pretty mad about it sometimes too, about as mad as I do towards my husband. You see how this goes.

A few years ago I was in the post office and this lady leaned over the counter, grunting and looking to be in a considerable amount of pain. I almost went over to ask if she was OK; though I’m glad I didn’t. It turned out she just needed to get some wind out herself. I blogged about that, so you’re welcome to read about it HERE if you want.

As I said, I am not a fan of gas jokes. The F-A-R-T word is NOT allowed in our house. I just think it’s crude and disgusting, and sure I get that everyone does it. But everyone takes a shit on a regular basis too, are we doing that publicly as well? No. No we are not. (At least the majority of us…the others, well you know who you are…) It is not and never will be socially acceptable, in fact I’m pretty sure if I were to drop my pants and take a dump in the middle of the grocery store I would very likely be assumed mentally ill. Even if I didn’t drop my pants but still took a dump while in the butter aisle of my local Vons, things would not go over very well. Why then can people putter around the store as though there’s a trombone festival coming out of their assholes while they pick out their Rice A Roni and applesauce?

You can all imagine then my shock and horror, and absolute disgust, when I was sitting in a waiting room and this man sitting there waiting for his appointment kept blowing them over and over, and over again. I was waiting for my daughter, who was dealing with her jerk father in Texas (who has ironically taken a shit publicly in a box and put it in a coworker’s locker, but we’ll save that one for another blog post some other time…).

For forty minutes, or so, I waited with this gassy man and his anus.

It wasn’t even just that. He was sitting there on his computer. A laptop. Tip-typing away, while I read on my Kindle, waiting. He just tip-typed and I knew I had seen him there before. Worse, I will very likely have to face him again. We were just sitting there, then all of a sudden he would blow one. It sounded something like a very long, very slow, trumpet. Then he’d laugh and say “sorry” out loud (at least he apologized, I suppose); but never once did he look up from his typing.

And I say never once because it happened again, the same way. Very long, very slow trumpet. Followed by a “sorry” and continuing to type. Then it happened again, and again, and then another time – until it had been a total of NINETEEN TIMES that this guy had blown his butt bugle slowly, without looking up or getting up to – oh, I don’t know – deal with whatever was going on with his intestines that required him to blow so much air out of them in a relatively public place.

It was just awful.

There’s a sign in the waiting room that says “please no outside food, turn off your cellphones.” This is – quite obviously – for the courtesy of all the rest of us that are sitting there and may or may not be interested in smelling your day-old Chipotle burrito; and/or listening to a loud conversation you have on your cellphone with your Aunt Mable about your cousin Jimmy knocking up his step-sister. I feel like they should add another thing on there. For the goodness of humanity and – at the very least – my sanity.

Because the next time that guy does something like that, I may just do something crazy. Like drop my pants and pee in the artificial tree in the corner of the room, just to show this guy how much fun it is to witness another person’s bodily functions to such a magnanimous degree.

Then again something tells me he might enjoy it. 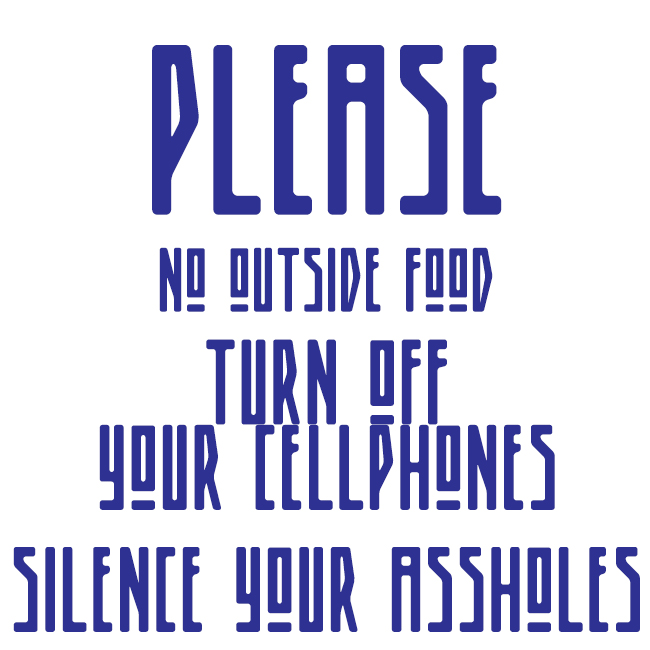 …I know… so much to wrap your minds around on this one. Perhaps this video of a deer in the woods with its own wind-related issues will help you get over this post. Now may we never speak of any of this again.

3 Replies to “PLEASE: No Outside Food, Turn Off Your Cellphones, Silence Your Assholes”