Let’s just cut to the chase right here and now: if you are going to get all defensive and up in arms because I’m about to take all the people whining and griping about winter, and shit, to task – just stop. Stop right now. Go back to your fucking pity party, where you sit on your computer looking for deals to tropical places that you will never take a vacation to during the winter; go back to your bitch posts on Facebook and Twitter about the cold and the shoveling and all that bullshit too. Just stop and go back to all that shit and do not read ANY FURTHER.

Because I don’t have time for your bullshit defensiveness right now. Really, I don’t.

I haven’t done an STFU Friday post in a long time, mainly because on Fridays I’ve been inundated with all of your fucking gripings about cold this, and polar vortex that, and OMG my weekend is ruined I have to shovel snow horse shit. Breaking the fucking STFU silence here, though, because – quite frankly – I’m sick and goddamned tired of all of you guys and your panty-waste whining.

There. I said it. Someone had to.

Well, it’s February 21st motherfuckers, and March is just around the corner. In like a lion and out like a lamb, so let’s just all agree to shut the fuck up and move on about this whole winter thing.

Before I moved to California, I lived in Chicago. I will never forget my last winter there. It was a doozy. Some nights the wind chill got all the way down to negative 30, and we had about 38 inches of snow in a period of roughly 48 hours. Now I’m not that old, and a lot of people I hear griping about the weather in the Midwest and East Coast right now have lived in cold areas like that for much longer than I have been away from it; which means that winter must be like child birth in the sense that everyone fucking forgets after a few years what a hard one really is like.

I am so tired of hearing about the polar vortex. Really. Really and fucking truly. First, and foremost – it’s over with! Fucking move on! Stop trying to analyze it, or deny the fact that the whether patterns are getting more extreme, and that the jet stream has changed, because of global warming, a.k.a. climate change. We’re not talking about why it happened – I have no interest in arguing with you ignorant fucking assholes about that. Let’s just all agree that shit is changing, and this is obvious proof of it. Now just shut up about it, because really it has been that cold before and it will be that cold again.

Shut the fuck up complaining about the way people drive in the winter weather, too. Or the way you have to shovel the driveway a lot. Every time I hear people bitching about shoveling I think to myself Jesus fucking a Christ, snow plows have been around and affordable for DECADES. Shut the fuck up about how you have icicles hanging from your roof, and about the fact that your heating bill has been so high the past few months. Probably 90% of the people I hear bitching and griping about all of these weather-related things work in the service industry: doctors, therapists, firefighters, policeman, nurses. In other words, there are plenty of jobs in places that are far warmer all year long where you could all relocate to and never have to deal with the snow driving-slash-driveway shoveling-slash-heating bill bullshit ever again. Until you make a concerted effort to do this, shut the shit up about all the rest already.

Can it with all your complaining about your kids being home from school. If you didn’t want to run the risk of your kids having snow days from school, you shouldn’t have had kids when you continue to live in a fucking place where you know this could be a possibility. Fuckin’ for real, people – someone had to fucking say it, and I know a lot of you that don’t bitch about your kids having to stay home on snow days were thinking it. That’s like saying you are upset because your child has a fever and can’t go to daycare. That’s pretty much been the lay of the land for – oh, I don’t know – since the advent of people having children in daycare. Therefore, you knew what you were getting into. Let your kids jump on the fucking bed after they play in the snow and have their hot cocoa; work from home, and shut the fuck up.

I saw an article the other day about how cities have a “new challenge” with all this cold and snow and ice and shit, in that they have to close down sections of sidewalk next to big buildings so that people don’t get murdered by falling icicle daggers. I’m sorry, new challenge? Huh? This has been going on FOR DECADES. Since the advent of skyscrapers. My mind is just utterly fucking boggled by this, because it is case-in-point proof that you people have never experienced winter before in your entire fucking lives.

But that isn’t really true, is it? The truth is that you guys had a couple easy ones, and – like I said – it was like all of your awful, 30+ hours of labor and delivery, when you tried to squeeze little Johnny out your v-hole. You forgot, quickly, how truly horrible it can be.

So let’s all just agree that you people amidst a shitty winter need to say “hey, look…it’s been a shitty winter, but just around the corner we’ll have spring and then a shitty summer to bitch and gripe about.” Because that’s what’s next, right guys? An extra hot, or extremely humid, summer that you all won’t shut your lily-livered mouths about?

Right. I thought so.

Sorry, guys. I know, this must be easy and all for me to say, being that I’m in California and haven’t worn anything but flip-flops in my 14 years here. But I’ve been back to the cold and the freezing in that time, and I just didn’t bitch about it. I actually enjoyed it. Truthfully, you guys should all consider yourselves lucky, for it isn’t until you live in the same, drab weather day after boring fucking day that you realize a harsh winter isn’t that bad in the end. It’s a change of pace. A beauty of nature. Something many people dream of and have never had the fortune to experience.

So shut the fuck up about winter, guys. Seriously. Shut. The. Fuck. Up. 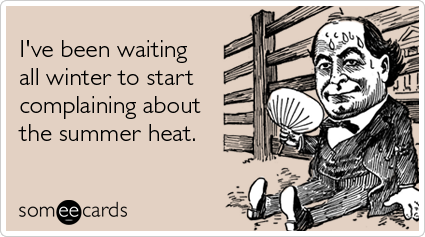