I’ve had to do far too much supporting of others lately, and it has taken a toll on me. Keeping my mouth shut and my opinions to myself has pent up so much anger and frustration within me that I literally want to scream the truth in people’s faces sometimes – am I the only one that sees what is really going on here?

Yet still, I hold it in.

It started about 9 months ago when my brother in law and his wife announced that they were having a baby. At our BBQ. (Because our BBQ was totally all about them.)

Since then it’s been one family event after another that I’ve had to be supportive at. Living only 5 miles from my husband’s family (yes, we basically live in Everybody Loves Raymond) this has been weekly. At some points in the last 9 months, it’s even been daily.

All the while, I just wanted to scream in everyone’s faces the truth – that they were just separated a year and a half ago. That I have vivid memories still of my husband’s brother seeming practically unable to go on with life because his then-ex-now-again-and-pregnant-a-few-months-in wife had left him.

And, more importantly, that not everyone decides to have a baby and POOF is just pregnant. That some people struggle for years only to be unsuccessful at it, and that knowing this is going on with more than one family member, yet still flaunting it around ad nauseum, is at a certain point really shitty of them.

Am I the only one that sees what is really going on here? Hold that in, Heather. 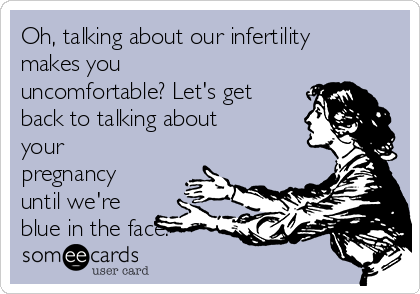 I could go on and on and on about all the things about this situation my husband and I don’t support, but I won’t. We’ve kept our mouths shut, with the exception of one occasion when we tried to have a reasonable and private conversation about it with his mother. We were told we should be more supportive. Since then, we’ve gone out of our way to be overly supportive of them, because we knew it was what his family wanted. (For that we’ve gotten it shoved up our assholes every way possible.)

Still yet, hold it in.

It has been way more than just that, though. It’s been the expectation to continue supporting my husband’s career even though it is very certainly, and undramatically, destroying our lives.

Hold that in, Heather. Don’t talk about the fact that we’ve got no employer-sponsored dependent health insurance, no retirement, and no raises in years at the Christmas party! That would be unsupportive of your man!

It’s been the measles outbreak – which we were actually exposed to, living in Southern California in a county that has one of the highest numbers of confirmed cases paired with some of the lowest pockets of vaccination rates. We sat there with my mother’s family last month, while friends and family talked about their wariness to vaccinate, as though we are all just supposed to stand by and watch irresponsible parenting run amok in society as a whole, in the name of supporting people’s personal choices as parents.

That was the same day we saw photos of my cousin’s wedding that we never received an invitation to, until a week before the wedding. She texted me and said she forgot to invite me. We were invited, but there were no kids welcome. In the photos, there were 12 kids present at the wedding we did not attend.

As I have sat here for 9 months brooding and deleting my comments and biting my tongue so hard I need a pint of blood to cover the damages, I quietly – in my head – added again and again to the laundry list of all the times that something should have been said to stop this madness once and for all.

Then, a few weeks ago in a public forum I went nuts on anti-vaxxers. Not emotionally, not illogically. But nuts. Scientifically and morally, yet insane.

I cannot begin to describe how much better I felt.

Now, in the aftermath of that, as weeks have gone on and I’ve been more and more honest, and less concerned about what people think of me and how unsupportive I may come across, I just have to say it. Maybe it will be the thing to end the madness:

Being supportive does not always make you a good person.

Somewhere down the line being truthful and honest became pejorative qualities. Sound advice became negativity, and a sensitivity and attention to the realities of the world, no matter how insignificant any one of them may seem, made you a hater. Instead we should all just hold hands and sing Kumbaya and be supportive of each others’ decisions and endeavors, all the while lying about what is universally true and right and real.

So this morning I logged onto Facebook, because naturally that’s where I get my news. As I scrolled through the feed I saw articles, updates, baby photos, and eventually news from fellow writers.

And then I saw an update about a blogging anthology, which shall remain unnamed, that is going to be published. It’s a sequel, and to be quite frank I didn’t like most of the first one. The update was lamenting not being included, more a statement on that own person’s insecurities and hopes to make it in the blogging world. I didn’t really get that feeling at the news, but I’m a writer, not a blogger.

As a side, I know a lot of really gifted writers that cannot even sell 10 copies of the self-published books, while cliche and mediocre stuff is peddled and makes it to the best seller lists – there is nothing right or good about that at all. All I said, though, was that I’d rather not be included, as other talented writers should take that as support that there are other, much better, projects out there.

Now, I know it sounded rude the way I said it, though, and I quickly realized that a few of the essays in the first book were written by friends that I did enjoy. So I deleted my comment within a couple seconds. I did not want to hurt anyone’s feelings at the expense of me feeling better about being more open and honest.

Of course I did not delete it before the organizer of the anthology saw my comment and, apparently, was insulted – perhaps as insulted as I am by her writing, in particular how much of a bully she is to people she doesn’t like.

But that is all neither here nor there to the central point.

After deleting my comment and moving on with my day, I realized that maybe I shouldn’t have deleted it; and not deleted it because of my own feelings of being insulted. Maybe I should have said the entire truth all along, with everything. As much as other people have a right to be insulted by my lack of support, I have a right to be insulted by their flagrantly terrible behavior to begin with. With the opportunistic anthologies; with the BIL and SIL’s baby; with my husband’s job – with all of it.

Keeping silent about what I know to be universally true and right and real feels so much worse than the backlash of speaking up. And in the end, al that is sacrificed by staying silent is me. So speaking up makes me a hater. I’d rather be an honest hater than a loved liar.

In the end, who is really the good person? 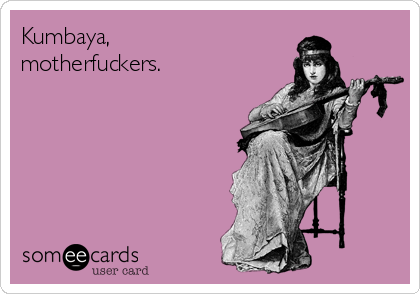