Such is the life of a Southern Californian.

(Disclosure: I am not a Southern Californian. I’m just married to one.)

Renters forever, we found ourselves with no home again this spring when we received our lease renewal, and it came packed with a whopping $485 a month rent increase.

Yeah. Fuck that. I would highly recommend to you, oh faithful blog followers, that you avoid Avalon Bay Communities at all cost (they are, in fact, national).

So we moved on June 1st, and don’t even get me started on all the frustrations that led up to it. The short version of the long story is that my husband, his brother, and their parents own a condo that they bought pre-us. At first, my husband and his brother lived in it with some other roommates, then it eventually turned into a rental unit for a family friend. Fast forward to now: we received our lease renewal notice, and decided it was time to ask that the family friend be given notice so that we could occupy the condo.

So here we are. It’s bigger and more spacious, which is OK (until it’s time to clean, which I’ll get into in a minute). There are definitely some major maintenance issues that have gone unattended to for who-knows-how-long. But it’s a place to live, and we didn’t have to move back to Los Angeles (which was ultimately what we’d have to do if we didn’t move here), so we’re all content. For now, at least.

This move was the real kicker in the pants for me, though. Mainly because I did about 98% of the work for it. I’m talking the packing, the phone calls, the house projects, the moving day stuff, the unpacking, the handy work…I’ve done it all.

As a result, I’ve learned a few things.

A Double Vanity Means Double the Sinks To Clean 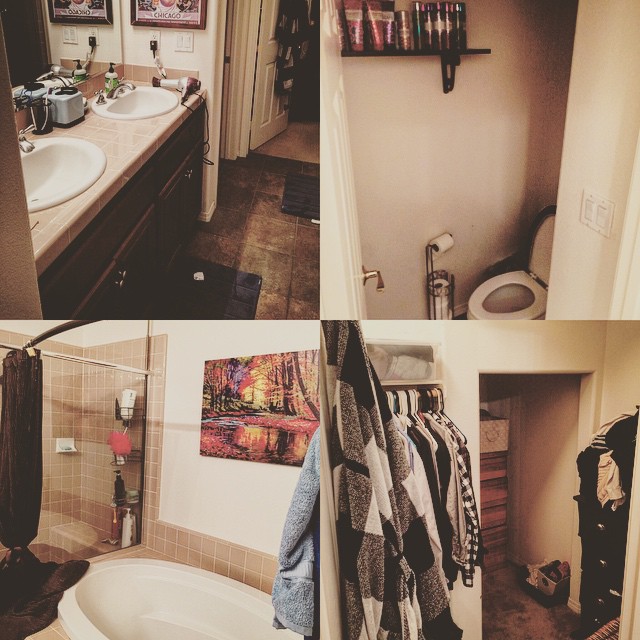 The bathroom in my husband’s and my bedroom has a double vanity. We’ve never had this before; quite frankly we’ve always been sharing a bathroom with at least one person, so this is a real upgrade. To have our own bathroom, free of kid’s toothpaste gunk in the sink or my elderly father’s Groom and Clean hair gel scent – well, for a while it seemed like it’d be heaven.

That was until I realized how much more work it is to clean. Not only does our bathroom have the double vanity, it has a huge soaker tub and a standing shower. If you’ve ever watched those house shows on HGTV, you’d know this is called an en suite bathroom, and it’s great and all… If you have a maid.

If you have just me, it’s terrible and a lot of work.

I should also mention that I went from cleaning two bathrooms to cleaning three and a half. This is essentially double the work for someone that can’t stand any of it.

I just really hate cleaning, and it seems like I’m doing it every day.

It seems like? What a crock of bullshit that is. I do clean every day. Every. Single. Day. Of. My. Miserable. Life.

The smallest place we’ve ever lived in was 850 square feet. We now have a whopping 2000, and I’m finding myself pining for those days that I only had 850 to vacuum.

Sure, we were basically piled in like sardines in a can, and you couldn’t do a single thing in the bathroom without the entire apartment hearing you. But it was all worth it now, as far as I’m concerned, to not have to vacuum so much.

Renters don’t give a fuck. Not. A. Single. Singular. Fuck.

Family friend or not (quite frankly, I don’t even know the guy), the guy that was renting this place from my husband’s family ran this place into the ground. Like a fuggin’ pile driver digging for the center of the planet.

Everyone keeps arguing that this is just normal wear and tear. Just the standard course of affairs for an older home.

Um, first of all this is not an older home. Second of all, no. Just…no.

Destroyed carpet requiring an emergency – and expensive – carpet cleaning is not normal wear and tear.

The smell of rotting flesh and sulphuric eggs wafting from the washing machine is not normal wear and tear.

A broken hook rack on the back of the bathroom door, literally dangling from just one, rusty screw is not normal wear and tear.

A ceiling fan falling out of the ceiling, with tape hanging from it – as if some dumb fuck actually thought that masking tape would hold the thing into the ceiling – is not normal wear and tear.

Holes in the doors is NOT…normal wear and tear.

WRITING ON THE FUCKING WALLS IS NOT NORMAL WEAR AND TEAR.

There’s only one conclusion I can come to here: renters don’t G.A.F.

Having Your Kitchen Back Means People Expect Meals Again

I packed up our kitchen maybe a month before we moved. We had other plans, vacation, and I just wanted it done.

What I’m saying is that for a month before the move, and for about a week afterwards, we ate nothing but crap. Total crap. We’re talking fast food. Take out. Frozen pizzas LIKE WOAH.

In a few words: it was heaven for this lady that hates to cook. I mean, I knew I was destroying my body and the bodies of my family, but my disgust for cooking overruled that. I kept telling myself it was temporary – which it was – so everything was spectacular.

Now that I have my kitchen back, though…it’s another story. Everyone wants real food.

No, I don’t mean real food like those losers on Instagram that incorrectly refer to whole fruits and vegetables as “real food” – as if Cheetohs and Cocoa Puffs aren’t something real I am putting in my body. I just mean three, square, home cooked meals. Every damn day.

With snacks. Homemade snacks. And desserts too.

Now that everything with the move has settled down, and I’m on my way to finishing the last of the house projects before settling back into my old routine of cleaning, cooking, and  acting as a chauffeur from tennis event to tennis event, I’m certainly glad it’s over.

But we’ve moved so many times, I just feel the next one breathing down the back of my neck. On one hand, my husband works in film, so it’s unlikely we’d have to move out of the area – which is the only situation under which I could see myself agreeing to ever move again. But on the other, you just never know.

One Reply to “Things I’ve Learned When Moving. Again.”