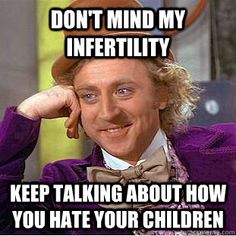 I don’t want to hear your pregnancy complaints.

I don’t want to hear about how you vomited six times because you smelled pineapple, which you used to love.

I don’t want to hear about your constipation.

I don’t want to hear about your spider veins.

I don’t want to hear about how you feel like an elephant. That you think you’re so fat. Yes, yes. You are so fat. Oh my God, you are like a beach ball. You are so huge. You can’t take this, I know. So big, so fat. Stick a fork in you, you’re done.

Nope – I don’t want to hear that shit. None of it.

I don’t want to hear about how the baby kicks – so precious and fluttery one minute, and so sharp and shocking another – keep you up at night.

I also don’t want to hear about how it took you one week and a bottle of gin to get pregnant.

I don’t want to hear about how it was a mistake.

I don’t want to hear about how you never wanted to have kids but – oh well – life has a way of messing with your plans.

I don’t want to hear your pithy responses to the fact that your unborn child was conceived during a one night stand.

I think you should all know where I’m going at this point, which is that not everyone in this world is so lucky and fortunate – because believe you me, pregnancy is an absolute matter of chance and great, often unfair, fortune – to be blessed with the miracle of pregnancy.

I don’t mean to invalidate the plight of the ever-pregnant woman. It’s hard. It’s a labor; isn’t it called a labor of love? I’m sure that’s where they got the term labor and delivery, because nothing good comes without work. And if there is anything that ends in a lot of work, it’s a pregnancy.

But if for a moment through the bitching and the griping and the whining and the complaining and the pouting and the crying a pregnant woman put her hormones and feelings of insecurity behind for a nanosecond and considered that somewhere, somehow, she’s going to bitch and gripe and whine to someone that CANNOT get pregnant – no matter how hard she tries – …..well, that would seem a little self-centered and insensitive, now wouldn’t it?

Personally, I know a lot of women – more than I can count on two hands – who would consider it a complete and utter blessing to get nauseated at the sight of a formerly-loved snack.

That would consider prenatal constipation a thing to rejoice over.

That would relish in spider veins.

That would own the fat ass, the fat thighs, the gargantuan bowling ball of a belly, the eight chins, and the flabby arms of pregnancy. That would own that shit so hard you’d get sick of it.

That would thank her lucky stars for every single rib kick at two o’clock in the morning. That would honor the miracle of her pregnancy with a daily allotment of Tums. That would take the insomnia and the mask of pregnancy and the thinning hair and the prenatal gas and the swollen feet and the wedding ring that no longer fits and the painful boobs and the prenatal rhinitis – and all of it – and say “fuck it, this was a hard-fought battle and these things are a sign that in the end I was victorious.”

Victorious, because not every woman that gets pregnant did so easily.

It’s that plain and simple.

This month is Pregnancy Loss and Miscarriage Awareness month, and yet I hear hardly anyone talking about it. Instead, all I hear are a gaggle of friends and family members griping about their with-child bodies. In a feat that, yes, is difficult, they all seem to have forgotten that not everyone walks the same path.