I’ve said many versions of that over the course of the years writing on this blog. And in life, in general. It’s probably one of the only cliches I can really get on board with. I’m just not a big fan of them – at least as far as talking in cliche goes.

(My most hated cliched phrase is “the grass is always greener on the other side.” Fuck you. My grass is dead, like my heart. Ain’t nobody want my cold, dead grass.)

But then there’s the becoming a cliche thing, which I have done through my adult life over and over and over again. It’s just how I live – one standard, societally-dictated role after another. You name it, I have probably – at some time until I’ve hated myself enough to stop – fulfilled it.

The biggest one, the one that persists in spite of the self-loathing it creates within me, is probably the worst. I am – at my core – a sanctimommy.

If you don’t know what a sanctimommy is, in short it’s: a woman who becomes a mother and then suddenly has an opinion that she believes to be absolute fact on what is right and wrong for children. All children. Every child in the world, regardless of their situation. Regardless of whether those children are hers or not, her positions are the universal imperative. The Kantian maxim of absolute moral right.

It’s almost as cliche as meeting your husband at the door when he gets home from work every night with a smoking pipe and a martini. (For me, I’m lucky my husband works nights, or I’d probably have fallen to that one too.)

So I fell to the cliche of the sanctimommy pretty quickly after becoming a mother, and my list of sanctimonious views on mothering and raising children has continued to stack up over the years. And they just get worse. I have an opinion for just about everything, and believe those opinions to be the absolute right in my world of black-and-white, never gray, rights and wrongs.

It’s just the way things are, and I am.

That doesn’t mean I share these sanctimonious views with everyone. I don’t take it the step so many do to judge others, and foist those judgments upon them. I’m rapidly becoming an Internet troll, making comments on news articles just to test out jokes or ideas for my blog (like my most recent: a comment on Starbucks when I don’t actually drink coffee…). But when it comes to parenting, I keep the tippy-typing in the comments to a minimum.

Were I to wield my sanctimommmy views upon the world: on the Internet, in my Facebook, at family gatherings and the kids’ weekly sports shit…it would be a wasteland. A wasteland of my universal maxims and everyone else hating me. A wasteland where I have zero Facebook friends left, and my invitations conveniently “get lost in the mail.”

In fact, only recently I shared one of my particularly new sanctimonious views on being a parent in the form of a joke meme. In it, I basically said that people with only one child have no idea – NO CLUE – what tired is. Because I have two. And I’m fucking tired – no doubt way more tired than if I only had one. You might say double tired. Well all the backlash came within minutes of me sharing what I thought was a hilarious meme I, myself, crafted, and suddenly every parent of one child thought I was some asshole who had not a single fucking clue what I was talking about.

Usually, and especially now, I’m so scared of the reactions I might get, that I typically only share my views on parenting with my husband. I’m not even sure if he agrees in earnest with me on most of this shit, some of it totally inconsequential to our current lives as parents. And often I wonder how he even tolerates someone as judgmental and sanctimonious as I.

But he does, and then there’s that whole thing where it seems like a lot of people in our lives hate me anyway. Like I said a few blog posts ago: I’m not everyone’s cup-o-tea. For every sanctimommy view I keep to myself, there’s at least three on other issues that I won’t shut the fuck up about. Many an invitation has been “lost in the mail” over the years.

So…why not just go full sanctimommy? Take the leap from holding my beliefs in my mind to outwardly and verbally judging others?

Why not tell people that I think at least one parent being at home with the kids at the very least part time until said kids graduate high school is what’s right? And that through sacrifices I have made, I know that oftentimes people claiming that they have to work is more a statement about their priorities in liking vacations and expensive things than what has been scientifically and statistically proven to be what is best for kids. (Note: I said oftentimes, and I am completely aware that in many families both parents need to work even multiple jobs each to meet the bills; though this does not change the fact that it would be categorically and factually beneficial for their kids if one of them were home at least some of the time.)

Or I could admit that for a brief period of time I seriously considered keeping pacifiers in my purse to slip into the mouths of infant family members whose parents – I can only assume on principle or the belief that they know better than trained medical professionals – had ignored the warnings of doctors that pacifier use decreases SIDS risk by 95%. That I believe people who put shoes on their children before their children can walk outside look at their children as a fashion accessory. And that people who pierce the ears of an infant – except in the case of Hispanic families, who have a cultural reason – are teaching their kids from the earliest age possible that their body is not something with which they have complete control over.

(I came close to outward sanctimommy recently on the piercing the ears of infants issue at a family dinner when I let a joke slip that I was going to buy my husband’s goddaughter big hoop earrings for her first birthday. When someone told me that was crazy, I said ‘almost as crazy as piercing an infant’s ears.’ But I knew then to shut my mouth and move on lest my true sanctimommy be released.)

There’s so much more I don’t share. About school work (kids should have a lot). About playtime (kids should have even more of that than school work). Like parents who line their kids up in so many extra-curricular activities that they have no time to be kids (that this is one of the worst things a parent could do).

My list goes on and on and on. I’ve already shared too much, and anticipate a backlash.

My point, though, is that I withhold from sharing most of it because it’s not my place to. I may think someone is doing something wrong by their children, but unless it’s actually endangering the life of the child – like legit endangering the life, for example when people choose not to vaccinate their children because they are insane and have no grasp of reality – then who am I to tell others how to live? You want to teach your kids particular lessons and values, by all means – do it. In the end, you will be the one to answer for that.

Just as I will be the one to answer for the lessons and values I have taught mine. And in that vein, no one has a right to share their own sanctimonious views with me on the way I raise my kids.

In the end, I think we are all sanctimommies. In our core of cores, it’s a mandate when you have kids. Otherwise, your kids flounder around, living life according to what a whole gaggle of people believe, and then you have taught your children something very damaging – perhaps the most damaging – that making decisions for yourself is not the way to live. That the opinions of others bear more weight than your own beliefs and feelings.

I would much rather feel like shit about myself for having so many judgmental views in my head, than raise my children to believe that they can’t make decisions of their own accord. If there is anything I’ll be sanctimonious and loud about, it’s that. 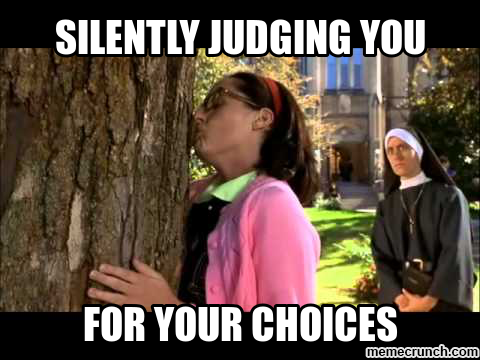