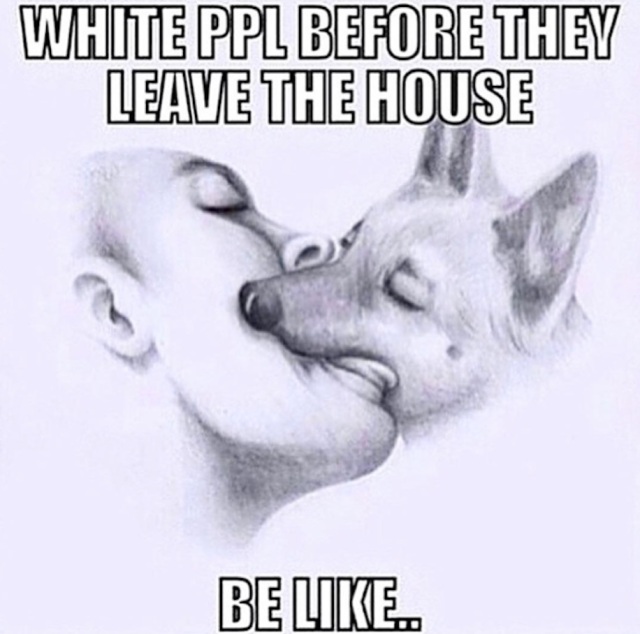 My dog and I have a disturbing relationship.

We have best friends necklaces. Like real…best…friends…necklaces. Her half is on her collar. Mine is on a chain I wear around my neck. Both have the “in case I’ve been found” number on the back.

I routinely and out of nowhere break out into serenades to my dog. None of them really make much sense, but they’re often to the melody of either Moon River or Lady In Red.

When my dog climbs onto my lap, the first thing I always do is put my face in front of hers and ask “can you make sure my nose is wet?” Because you know, I sort of think I’m of the canine variety too. Well at least I started thinking that when we adopted our dog (two years ago).

For Christmas I gave my dog a heated pad to lay on and an expensive fountain. For her birthday (February 1st) I got her no less than seven toys. And I wrapped them. In a gift bag. Covered in dogs.

Then I apologized to her for making a mockery of her kind out of gift wrap.

For Valentine’s Day, my dog got me a card and a new paper towel holder. The card said she woofed me. I spent the next three days shouting “YOU ARE MY VALENTINE” every time she came into the room.

I’ve written about my dog on this very blog at least three times. I’ve never painted or drawn my dog, but that’s just because I see these drawings and paintings all the time of dogs in pajamas and I’m afraid mine would turn out like that.

That being said, I have photographed my dog 283 times. This year.

When I get a glass of water for myself, I share it with my dog. Actually, we’ve gotten to the point where she just leans over and helps herself without even having been offered any. Same goes for my food. The other day I was about to eat some cheese and crackers. I got up to get a glass of water for us to share. When I came back she had eaten exactly her half of the cheese and crackers off the plate. Exactly. No more, no less. I mean it was originally just for me, but she and I both knew I’d be sharing in the end.

My husband and children are absolutely disgusted by my relationship with my dog. Like grossed out. Like “GOOD GOD WHY NOT JUST RUN AWAY WITH HER” horrified with our love.

So I have two kids: 12, and 8. My husband and I don’t go out on date nights, but were we to we wouldn’t be missed by the children. And to be fair, we probably wouldn’t miss them much either. But the reason why we don’t go on date nights is because when we leave the house I whine about how much I miss the dog within five minutes.

I have Skyped her while out.

I could go on, but I think you guys get the point. I’m addicted to my dog. Obsessed with her to a level that is probably unhealthy.

But you know they keep saying in the news that such and such a study says dogs are good for people, and prolongs the owners’ lives and shit, so I’m sticking with that as enabling my addiction.

I think it all boils down to the simple fact that my dog tolerates me. She doesn’t talk back. She likes to cuddle and watch Netflix, rather than do things like chores and run endless errands to Home Depot. When I get home she’s happy to see me, which I can’t say the same for the rest of these people. And she accepts me for who I am, or at least I think she does.

It probably would have been more appropriate to just refer to this as my dog update, because the crux of all my other posts about my sweet Amelia have been along the same vein. She is a drug I cannot kick. A drug of wet noses, sloppy kisses, long days of napping and playing with a ball. I figure that as long as I allow myself to be addicted and officially obsessed with her, I can live the fanciful life of a dog too. Because really, who doesn’t accept that a dog’s life is the best of all possible lives?